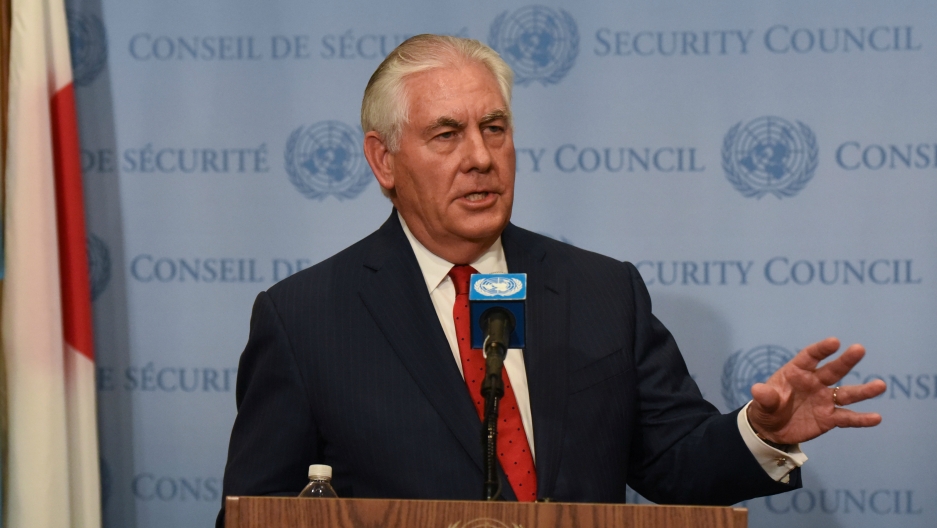 US Secretary of State Rex Tillerson delivers remarks to members of the press after a meeting about North Korea's nuclear program at the United Nations headquarters in New York City, Dec. 15, 2017.

US Secretary of State Rex Tillerson on Friday urged North Korea to carry out a "sustained cessation" of weapons testing to allow the two countries to hold talks about Pyongyang's nuclear and missile programs.

Tillerson's remarks were a retreat from his position earlier this week when he offered to begin direct talks with North Korea without preconditions, backing away from a key US demand that Pyongyang must first accept that giving up its nuclear arsenal would be part of any negotiations.

But the White House distanced itself from those remarks by Tillerson and said now is not the time for negotiations.

"North Korea must earn its way back to the table. The pressure campaign must and will continue until denuclearization is achieved," Tillerson told a meeting of the United Nations Security Council on North Korea's weapons programs. He did not specify how long the lull should last.

He told reporters after the meeting that the United States would not accept any preconditions for talks with North Korea.

North Korea's ambassador to the United Nations on Friday made no mention of Tillerson's call for a halt to testing when he addressed the same UN meeting.

Ambassador Ja Song Nam said his country would not pose a threat to any state, as long as its interests were not infringed upon.

He described the Security Council session as "a desperate measure plotted by the United States being terrified by the incredible might of our Republic that has successfully achieved the great historic cause of completing the state nuclear force."

North Korea has made clear it has little interest in negotiations with the United States until it has developed the ability to hit the US mainland with a nuclear-tipped missile, something most experts say it has yet to prove.

North Korea conducted missile tests at a steady pace since April, then paused in September after firing a rocket that passed over Japan's Hokkaido island.

But it renewed tests in November when it fired a new type of intercontinental ballistic missile, the Hwasong-15, which flew higher and further than previous tests.

Japanese Foreign Minister Taro Kono told the Security Council that North Korea was "nowhere near ready" to abandon its nuclear and missile programs and was not interested in a meaningful dialogue. He said any lull in missile tests did not mean that North Korea was sitting idly.

“The latest launch was conducted 75 days after North Korea’s provocations in September. Some optimistic views labeled 75 days of silence as a positive signal. However, the missile launch in November made it clear that North Korea was continuing to relentlessly develop its nuclear and missile programs even while they were seemingly silent," Kono said.

Tillerson also urged China and Russia on Friday to increase pressure on North Korea by going beyond the implementation of UN sanctions, but the two countries were wary of the idea.

China’s deputy UN ambassador, Wu Haitao, said all parties must implement UN sanctions, but said that unilateral sanctions undermine the unity of the Security Council and “hurt the legitimate right and interests of other countries and should therefore be abandoned."

US President Donald Trump wants China, North Korea's main ally and trading partner, to impose an oil embargo on Pyongyang, over and above Beijing's adherence to UN sanctions.

The Security Council has ratcheted up sanctions on North Korea over its weapons programs since 2006.

UN Secretary-General Antonio Guterres told the Security Council on Friday it was time to immediately re-establish and strengthen communication channels with North Korea, including inter-Korean and military-to-military channels, to reduce the risk of a misunderstanding escalating into conflict.