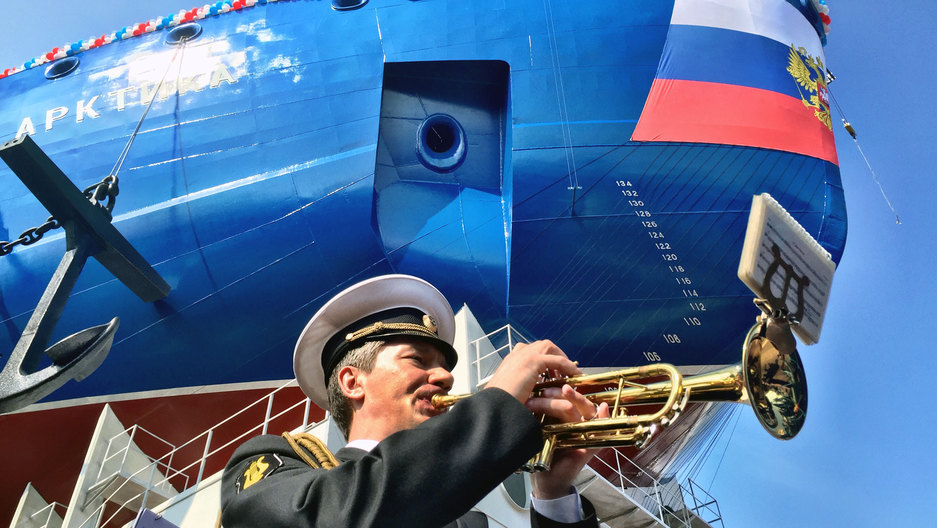 In July 2016, Russia celebrated the maiden voyage of the Arktika, a mammoth football field-sized vessel that could cut through ice nearly 10 feet thick. The launch of the ship was part of Russia's efforts to do more trade in the Arctic, as global warming opens up new routes.

In July of 2016, I wrangled a rare invitation to the Baltic Factory, a legendary shipyard in Saint Petersburg, for the maiden voyage of the Arktika.

This was no ordinary ship. The first of a series of next-generation Russian nuclear icebreakers, the Arktika was and is touted as the biggest and most powerful ship of its kind — a mammoth football field-sized vessel that could cut through ice almost 10 feet deep on ostensibly endless journeys through the most desolate areas of the globe. And while it’s doing that, Arktika is also securing Russia’s economic future.

It’s no secret that for the last several years, Russia has invested heavily in its Arctic north — a reflection of the region’s growing commercial and strategic importance amid global warming trends. The military has repopulated near-abandoned Soviet-era bases. Russia’s state energy sector has also announced plans to tap hidden natural resources on the Arctic shelf.

And amid these moves, nuclear icebreakers have their own role: they’re part of a larger Russian effort to monopolize lucrative commercial shipping routes across Russia’s north and into the Asian market.

Given those stakes, symbols of the Russian state were out in force at the shipyard that day. A military band played in full regalia. Orthodox priests blessed the ship for safe journeys to come. And dignitaries and lawmakers recounted the glory days of the Baltic factory — when it launched the Soviets’ first generation of nuclear icebreakers back in the 1960s — before multiple near bankruptcies crippled the enterprise in the post-Soviet 1990s.

Related: Meet the man who volunteered for Obama, worked for Bernie and is now consulting Putin's opponent

Their presence and optimism was understandable: two years of western sanctions — many aimed squarely at stemming Russia’s Arctic ambitions — had failed to stop the day’s celebrations. “This is our answer to western sanctions,” declared one speaker.

The launch went off without a hitch.

“The Arctic is ours!” one factory worker said to me, as the ship glided into the harbor. “Whoever gets there first gets the best place at the table, isn’t that right?”

His name is Pavel — Pavel Gorbachev.

Half-joking, I asked: “Are you related?” Mikhail Gorbachev, after all, was famous as both the Soviet premiere and architect of political reforms.

Pavel insisted he was ashamed of the association. “Gorbachev nearly ruined the factory,” he told me. “I’m no democrat.”

Changing topics, I asked about the launch. He was bubbling over.

That sentiment, more than any, reflects the desired central narrative — or, perhaps myth — of the Putin era. After years of irreverence and national humiliation, Russia is back. “Risen from its knees,” as Russians like to say.

Many credit president Vladimir Putin for the feat. And they have a point. 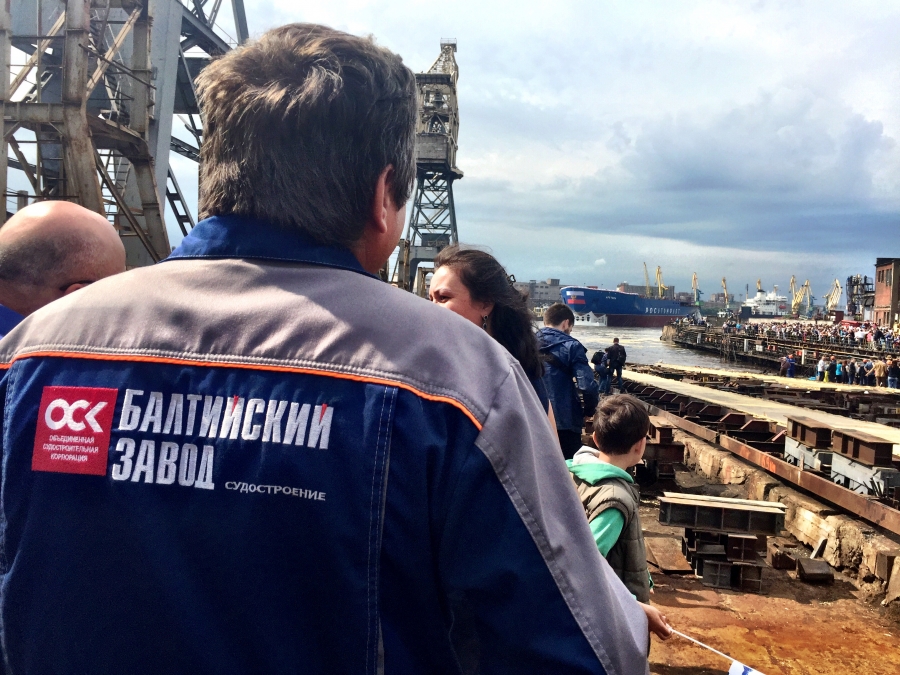 A Baltic Factory worker looks on as the Arktika hull drifts into the harbor. The ship was slated for completion in December 2018 but has faced construction delays due to western sanctions.

Under Putin, Russia is once again taken seriously — if not feared — on the international stage. The country hosts premiere world sporting events — such as the Sochi Olympics in 2014 and this year’s World Cup. And compared with the economic chaos of the 1990s, Putin’s watch has ushered in a period of relative economic stability that many appreciate.

But many of Russia’s problems never went away. There is the endemic corruption — including at the top levels of government. There is the grinding poverty, particularly in the country’s smaller towns and villages. Breakdowns in infrastructure are a regular occurrence. These issues are regularly ignored by state media as it pushes the narrative of Russia’s return as a global power.

Related: Will Russia get involved in the 2018 elections?

Even the Arktika employs a certain level of projected optimism. The nuclear icebreaker floating in the harbor that day? An impressive but fundamentally empty hull, the real work still to be done.

Fast forward a year and it’s still moored in port due to delays in construction. Russia was having trouble manufacturing the Arktika’s turbine and propulsion systems after orders from western companies were cut off over sanctions. The ship’s completion has been pushed back until the end of 2018.

Russia’s answer to sanctions, in other words, had run into sanctions.

That is not to say Russia’s nuclear icebreaker program is doomed. Russia may get there yet. The larger point is often — too often — demonstrations of Russian power have an element of overinflation. Of optics. And once the sleight of hand is revealed, genuine accomplishments appear somehow cheapened.

This series seeks to explore the blur.

Take Russia’s renewed military prowess. Independent analysts will tell you the reforms are real. Its special forces stormed Crimea with ease. Its air campaign in Syria carried out with a brutally competent show of force. Yet a look behind the scenes reveals a patchwork of shadow mercenaries and “volunteers” whose deaths, injuries, or capture mask the stakes of both the war in Syria and Ukraine.

A feel-good story of Russian athletes return to Olympic glory? There are more than enough to fill 10 NBC specials. Yet many of these same athletes are now tainted by a state-sponsored doping program not content with merely winning, but intended to dominate the field.

And there is the much-covered issue of disinformation or fake news. Long before allegations of Russian interference in the US presidential elections, reports of paid Kremlin-linked trolls and fabricated news websites worked with official state media to infect — and perfect — the manipulation of politics at home.

Indeed, Vladimir Putin’s popularity — 18 years in power with more certainly to come — employs elements of this fakery. Does Putin have his base of supporters? Of course, he does. Is he popular? Yes, he is. But state-connected polling organizations massage the numbers. Trolls and state media combine to inflate Putin’s abilities to comic levels of cult of personality. And real rivals are never given equal platform to challenge or compete.

The March 2018 elections — just days away —  reflect the chicanery. The country’s key opposition leader, Alexey Navalny, has been banned from the race on questionable legal grounds. Other candidates — including genuine critics of Putin’s rule — are included as mostly placeholders to generate voter interest and intrigue. Meanwhile, heavy-handed efforts to get out the vote — and prevent outsiders from monitoring it — point to a fundamental weakness: Russians may trust Putin, but it’s far from clear that Putin trusts them. Younger voters in particular are a source of concern.

Understandably so. Like “Make America Great Again,” “Russia Rising from its Knees” implies both can-do optimism and untapped anger. It promotes the idea that not only is their country flourishing again, but also that someone is trying to hold it back. Today, most believe it's America. Tomorrow, who knows? Loyalties can shift.

And one gets the impression that somewhere in that, lies the answer behind the way the Kremlin sells this ghost version of an empire to Russians.

Someone has decided that the illusion of Russia constantly winning is more important than the occasional win.

And it’s a strategy that works — at least until a majority catches on.