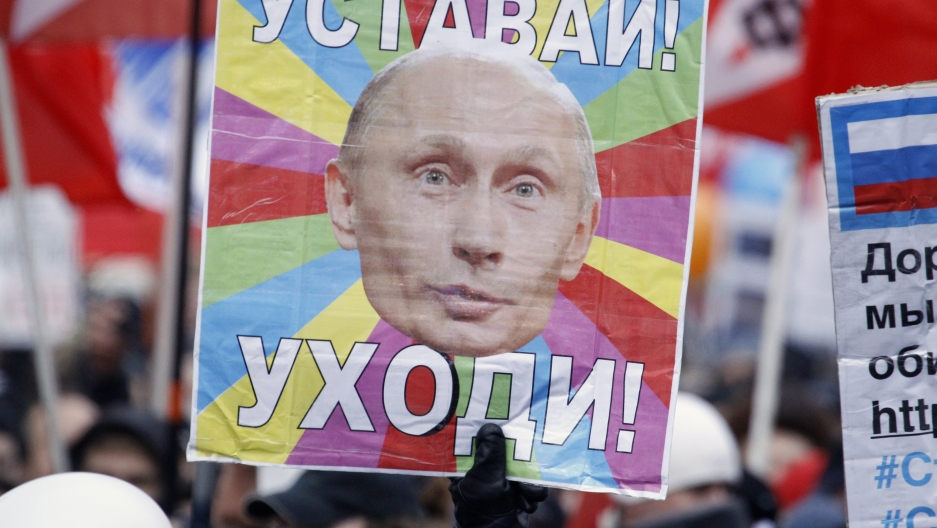 Anti-government Russian demonstrators took to the streets in December 2011, increasing pressure on Vladimir Putin as he sought a new term as Russian president. The placard reads "Get tired! Leave!"

When demonstrators poured into the streets of Moscow to protest parliamentary election results in late 2011, the Kremlin had a quick explanation of what was really going on.

"The answer, of course, was Hillary Clinton, then secretary of state, must be fomenting disarray and confusion," says author Michael Idov, who covered the protests. "The problem with that is, of course, that the United States, the State Department and the CIA have in fact over the course of history been instrumental in regime change."

Idov explores the aftershock of the 2011-2012 Russian demonstrations in his new book, "Dressed Up for a Riot: Misadventures in Putin's Moscow."

He told The World's Marco Werman what it felt like in Russia in 2012, and how that reverberates today.

Marco Werman: In 2012, a milestone year for Russian activists, you spent a lot of time with the opposition. They were seen by the Kremlin as agents of Washington, yes?

Michael Idov: Putin's KGB mindset suggests to him that there are only two powers in the world — Russia and the US — jostling for influence. He basically sees the entirety of the 1990s as the US grabbing more influence over Eastern Europe. So, in his mind, grabbing Crimea is tit-for-tat. The Ukrainian revolution of 2004 and the Orange Revolution of 2014 were directly inspired, if not directed, by the State Department.

It didn't help that people like Victoria Nuland and Sen. John McCain would go to Kiev and "showboat," egging on the protesters. It's funny because this is kind of a benevolent enthusiasm that America tends to have for freedom movements all over the world, which is often seen from another point of view as malevolent meddling. So this is something that provides a kind of moral justification for Russia to meddle in American elections.

Well, let's go back to 2012. I want to hear from you what that actually felt like on the ground in Russia.

I've never felt myself to be part of the Russian freedom movement. I thought of myself as a sympathetic American observer. But then all these people that I ran into, they saw me as a progressive Russian editor, a brave little freedom fighter. And it was funny to feel condescended to and patronized. We Americans do talk down to the Russia opposition because once they saw me as a Russian magazine editor it was literally like, "Aren't you cute! How can we help you fight the bloody regime?" And then, of course, the more you talk to these people, the more you realize that they don't have the facts. You're on the ground and everything is much more nuanced.

Was US meddling in Russia in 2012 really that innocent?

In 2012, I would say yes. There was an excitement about things finally sort of shifting after so many years of political apathy. And there was a dash of hope that these middle-class protest movements would force the Kremlin to liberalize. Putin came back and promptly began closing down all avenues for protest.

In the final pages of your book, you conclude that Russia has suddenly gotten what it has wanted: fear and grudging respect. The West is finally as obsessed with Russia as Russia has always imagined it was. These days, do you recognize the Russia you've been seeing in American characterizations of Russia?

Sometimes yes, because some of it is based on some fantastic journalism that has been done unraveling this influence operation that Russia has been trying to put together in order to export its cynical vision of the world.

On the other hand, I don't recognize Russia when it's depicted in the West as a ruthlessly competent place, a place run by cynical technocrats who have gamed every move in advance. That's just not true. The Russian disinformation and influence efforts have always been haphazard and largely inept. It's just that they got incredibly lucky because their guy won.

Sometimes, Western reactions border on racism. Just today actually, a jokey tweet from somebody I respect a lot, Jennifer Palmieri, the White House communications director under President Barack Obama, was something like, "I'm in the San Francisco airport and I just got into a gypsy cab. It's unmarked and it's driven by a Russian. So in case I disappear, it's a tan Lincoln Continental."

It's very strange to feel this way, but that is racism. Casual and jokey, but it is racism. And I wish we were able to acknowledge the fact of the Kremlin's sort of malevolent intent, without making the conversation into some sort of Cold War thing about godless communists or just generally caricaturing what others say. That would be nice.