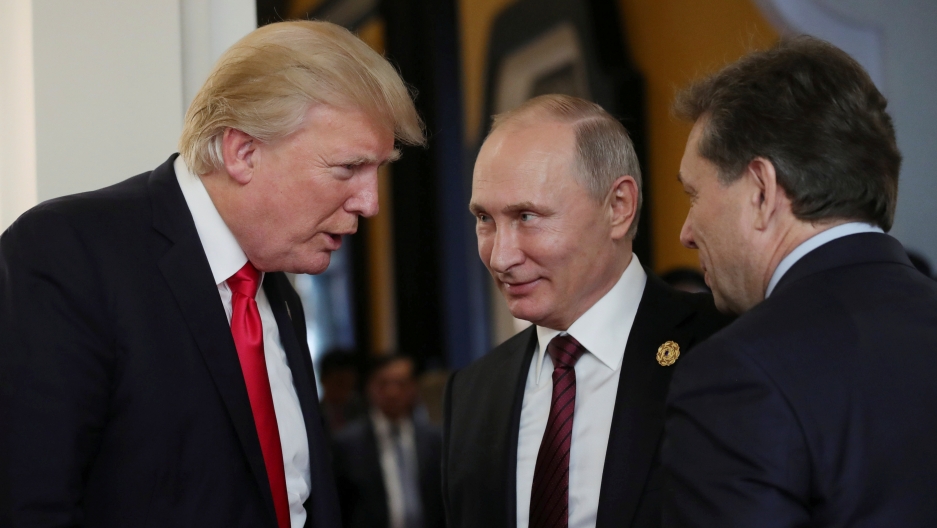 US President Donald Trump and Russian President Vladimir Putin talk during a break in a session of the APEC summit in Danang, Vietnam, Nov. 11, 2017

Russian officials, including President Vladimir Putin, poured scorn over the United States’ publication of the so-called “oligarchs list” — a US Treasury-issued registry of 210 Russians identified as close to Putin under a new sanctions law that resulted from allegations of Kremlin interference in the 2016 US presidential elections.

Speaking in Moscow, Putin said that by including nearly all key members of his government and Russian industry on the list the US had, in effect, carried out “a hostile step” against “all 146 million Russians.” His only regret, the Russian leader added, was that he wasn’t among them on the list.

Yet Putin indicated that Russia would not respond — for now.

“We’re not prepared to crawl into the wolf’s trap and make the situation worse,” said Putin. “We want and will patiently build relations as much as the American side is willing.”

The list — part of the wider Countering America’s Adversaries Through Sanctions Act (CAATSA) ordered by Congress and signed into law by President Donald Trump last August — requires the White House to provide a detailed report on the dealings of key Kremlin insiders.

However, the Trump administration — which has bristled at suggestions it benefited from Russian interference in the US elections — held off on complying with the law until the last minute.

On Tuesday afternoon, US Treasury Secretary Steven Mnuchin told lawmakers that the Trump administration intends to levy new sanctions based on the list published late Monday.

Vyacheslav Volodin, speaker of the Russian Duma, said the list was the latest in a failed US sanctions policy aimed at weakening an increasingly powerful Russia.

“The sanctions haven’t led to a change in our country’s political course, or weakened our sovereignty, or led to an internal split,” said Volodin, in a statement posted to the Duma’s official website. “New sanctions against Russia will lead to even greater consolidation of society,” he added.

Konstantin Kosachev, the head of Russia’s Federation Council Foreign Affairs Committee, mocked what he saw as amateur detective work by US intelligence agencies. Writing on Facebook, Kosachev said he had the “the firm impression that US secret services, desperate to find the provable compromising evidence they promised on Russian politicians, just copied the Kremlin phonebook.”

Indeed, the US Treasury list of Russian oligarchs appeared to steal from a Forbes Russia ranking of the country’s wealthiest 96 men; its registry of government figures, other journalists noted, was a near copy of the Kremlin’s own English-language “key officials” webpage.

Even some Kremlin critics admitted that the sanctions were unlikely to unnerve Russia’s powerful — at least not yet.

“It’s a threat, not a punch,” wrote Gudkov on his Facebook page. “For now that list only means a morning heart attack for the most sensitive of souls.”

In advance of the list's publication, the Kremlin had indicated Russia viewed the registry — and any additional sanctions — as an attempt by the US to influence Russia’s presidential elections in March, when President Putin is all but guaranteed to win re-election to a 4th term in office.

Related: Will Russia get involved in the 2018 elections?

Indeed, Putin was asked about the issue during a campaign meeting with supporters, one of whom asked what he would have to do to join the list —  to audience laughter.

Putin responded by suggesting that Russians’ goal should be to develop their economy to the point where “there’s no point to formulating any lists ... to hold us back.“

Yet Russia’s opposition leader Alexey Navalny — who has been barred from competing in the presidential elections — was among those cheering the “Putin list” as long overdue.

Navalny noted that his Anti-Corruption Foundation team had carried out its own investigations  — and produced reports that highlighted Kremlin corruption by several figures featured in the US Treasury list.

“Well, what I can say?” Navalny wrote on Twitter. “We’re glad that they’ve been officially recognized as thieves and swindlers on the international level.”

Meanwhile, online debate seemed to split over the blanket nature of the Treasury list and whether it had gone too far, or not far enough.

Why, some asked, hadn’t the Kremlin central bankers been included? Where were Russia’s senior court judges? The head of the Election Commission?

What, others wondered, was Russia’s human rights ombudsman doing on the list? Or a businessman who, while wealthy, had no clear ties to the Kremlin?

And if Russia’s top diplomat — Foreign Minister Sergey Lavrov — was on the list, others asked who would be left to negotiate with Washington if and when Russia were ever to repair relations.

Konstantin von Eggert, a foreign affairs analyst and host on the independent station TV Rain, noted that the list had suddenly rendered the role of competing interest groups inside and outside the Kremlin irrelevant.

Fairly or not, the US had included nearly Russia’s entire political and economic elite in a web of Russia sanctions that touch on issues such as election interference, human rights abuses and the Kremlin’s actions in Ukraine.

“Everyone,” argued von Eggert, "is now in the same boat.”