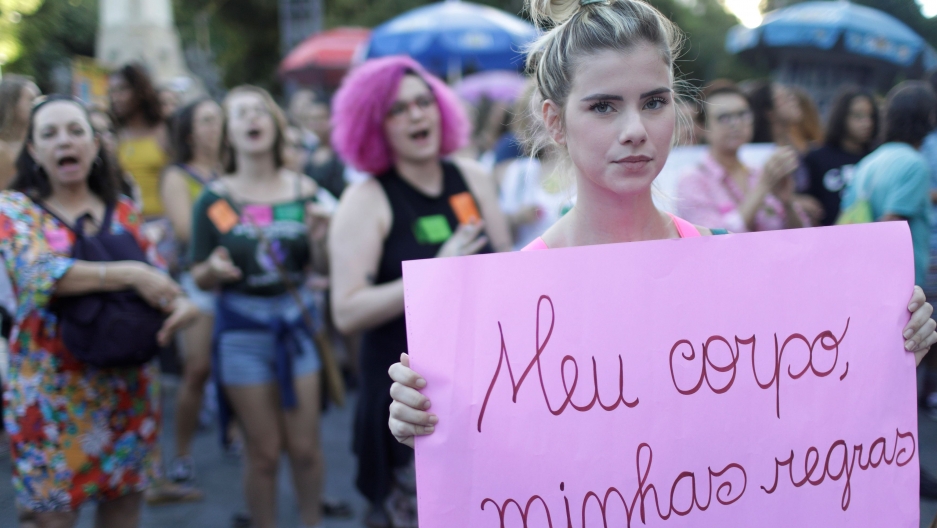 Protesters demonstrate against Brazil's congressional move to criminalize all cases of abortion, including cases of rape and where the mother's life is in danger, in Rio de Janeiro, Nov. 13, 2017. The sign reads: "My body, my rules" and "Out Temer."

Sabrina has had several abortions, but it's her most recent that still makes her uneasy.

Sabrina isn’t her real name — she agreed to speak on the condition of anonymity since abortion in her country, Brazil, is illegal, except in cases of rape, life-threatening pregnancy or a fatal brain defect in the fetus.

Previously, Sabrina went to a clandestine clinic that had been an open secret among Rio de Janeiro’s middle- and upper-class women. When she needed help again in August 2014, the place had been shut down amid police crackdowns on illegal abortions. So, one afternoon, Sabrina turned to a last-resort option — she was collected from a supermarket parking lot by gang members in Rio’s militia-laced peripheries and taken to a residential home.

“It was obvious that no one there was a doctor. It seemed like a trick. Like something dirty,” said Sabrina. She still struggles to articulate the niggling feeling in the back of her mind that day, but shaking her head she added, “It felt like a butcher shop.”

Related: A mother’s fight for abortion rights in evangelical Brazil

Despite the dangers, experiences like Sabrina's might soon become more common here, if Brazil passes a controversial amendment to the country’s constitution that could completely outlaw abortion. The proposed amendment, known as PEC 181, was originally intended to extend maternity leave for mothers of premature newborns. It included a clause to “protect life from conception,” however — banning abortion altogether — which has sparked numerous protests in the country’s biggest cities. Human rights groups, including several UN agencies, Amnesty International and Human Rights Watch say the measure could pose significant dangers to pregnant women.

The amendment is due to be debated again by a special committee in early 2018, before going to a vote in Congress.

“It was obvious that no one there was a doctor. It seemed like a trick. Like something dirty.” — Sabrina

Complications following illegal abortions kill one woman every two days in Brazil, according to official Ministry of Health data. More recent media reports show that it could be considerably higher, up to as many as four women a day. Meanwhile, Brazil’s race and social class disparities mean that black and working-class women are 2.5 times likelier to die than white women.

The Rio-based nongovernmental organization, Working Class Woman’s House (Camtra), is among the chorus of voices condemning the move. “In every case when there are setbacks, the first rights to be taken away are women’s rights,” said Eleutéria Amora, Camtra’s founder and coordinator.

Erika Kokay, a Workers Party congresswoman on the justice committee that voted on the measure in November, was the only woman in the room. She was also the only one to vote against the measure, while her 18 male colleagues ended the session with chants of “Life yes! Abortion no!”

Related: The abortion debate in Poland heats up again with newly proposed bill

“The constitutional amendment has fallen victim to religious fundamentalism,” Kokay told PRI. She said that the Catholic and evangelical Christian “fundamentalism,” present in Brazil’s political houses for some time, is a growing menace to secular politics. “Abortion laws substantially penalize women without resources. They are denying women’s right to life, to choice and to their own bodies.”

A spokesperson for PEC 181’s rapporteur, congressman Jorge Mudalen, told PRI that the amendment remains true to its original purpose and only seeks to “ensure that abortions not provided for in the legal system are prevented from being performed.” However, the deputy has also said that he chose his words carefully “to guarantee the right to life and because we are against abortion.”

Meanwhile, as measures are debated, clinic closures as a result of crackdowns mean the options are increasingly scarce for women. Paula, who also asked that her real name not be used for fear of repercussions, got pregnant in 2015 when her contraceptive and birth control pill failed her. She ended up buying the labor-inducing drug misoprostol on the black market. But, she says, internet forums offer dangerous solutions for despairing women, from cinnamon-and-bleach tea “recipes” to miscellaneous pharmaceuticals and advice on utilizing knitting needles.

Dr. Ana Teresa Derraik Barbosa, director at a maternity hospital in Rio’s long-neglected Baixada Fluminense periphery, says that the internet has empowered women like Paula when it comes to finding safe options like misoprostol. But, she says, a lack of availability means many still turn to more dangerous methods.

“The lack of access to secure abortions causes a huge risk to well-being,” she said. “A desperate woman will try anything to get rid of an unwanted pregnancy. She won't just not abort because abortion is forbidden.”

One particular incident has stayed with Dr. Barbosa. In 2014, a 25-year-old woman had been transferred from another hospital, suffering from complications after injecting a caustic substance into her uterus. She was the sole provider in her household, with two daughters under 5 and an 80-year-old grandmother.

Dr. Barbosa’s team had a choice: Remove the uterus or let the patient die. While they operated, necrosis spread to her patient’s fingers and toes, a side effect of a necessary medication during the operation. “Hands are easier for you to recuperate, with physiotherapy. But not the feet,” said Dr. Barbosa. “She left with both her feet amputated.”

Research from Brazil’s Institute of Bioethics (ANIS) confirms Dr. Barbosa’s hunch: Neither unforgiving abortion laws nor the high risks attached to illegal abortions prevent women from seeking the procedure. The institute’s most recent national study on abortion found that approximately 416,000 women had sought out abortions in 2015, the majority of which were illegal.

“A desperate woman will try anything to get rid of an unwanted pregnancy. She won't just not abort because abortion is forbidden.” — Dr. Ana Teresa Derraik Barbosa

Débora Diniz, the author of ANIS’s annual study, told PRI that the findings also emphasize the psychological trauma women experience, isolated by the eight-year period during which they can still be prosecuted for seeking an abortion. “If abortion has any enormous harm in women's lives, it's the danger imposed by silence, by stigma and by persecution,” she said.

While the amendment may be bringing the topic back into the public conversation, abortion remains stigmatized: One recent poll found that 62 percent of Brazilians were still against abortion in general, although many were willing to make exceptions in cases currently permitted by the law.

However, Diniz believes that politicians are trying to capitalize on current polarization to build their voter bases before next year’s elections. “It’s opportunism,” she said. “The proposal wasn't even about abortion. That's what's dishonest here.”

Camtra’s Amora is similarly appalled by Congress’s underhand move and worries about its future implications. “We aren’t even particularly trying to legalize abortion right now,” she said. “We’re having to fight simply to not go backward, to not lose what we have.”