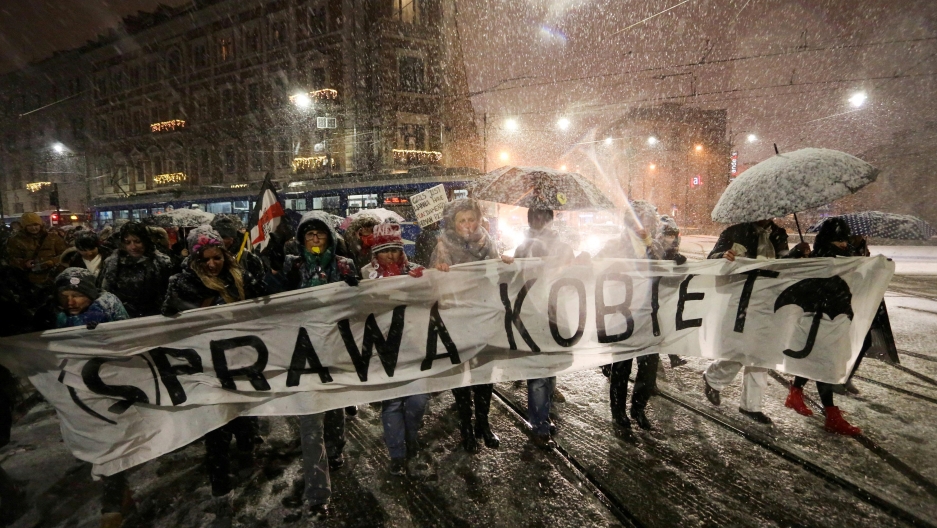 Last week across Poland, thousands of women took to the streets in the Déjà Vu Strajk Kobiet, or, Déjà Vu of the 2016 Polish Women's Strike.

In October 2016, Polish women stood in the pouring rain and freezing temperatures to protest a proposed bill that would ban abortion in the staunchly Catholic country. Ostensibly in response to international pressure, days later, the Polish government rejected the legislation.

A newly proposed anti-abortion bill drew a similar reaction from many Polish women this year. On Jan. 17, women demonstrated in 50 cities around the country, donned in black — a nod to the 2016 march where participants also wore black, in solidarity.

If passed, the bill would ban abortions relating to irreversible damage to the fetus.

As it stands, Poland currently has some of the strictest abortion laws in the EU. Women can only have abortions in cases of rape or incest, a threat to the mother’s life or health, or severe damage to the fetus. This new bill would eliminate the "damage to the fetus" exception. Abortions due to a damaged fetus are the main legal avenue to termination in Poland. Out of the 1,100 legal abortions recorded in the last year, 1,042 were carried out as a result of a damaged fetus.

The bill — in 2016, as well as this year — was submitted by Poland's Stop Abortion group. Poland's constitution allows citizens to submit proposals that have garnered over 100,000 signatures.

Kaja Godek, a member of Stop Abortion, told parliament that prenatal tests to check the health of a fetus are being misused. According to parliamentary transcripts, Godek said, "Instead of treating and preparing parents and doctors to receive a child and help the child, it is being made easier to make selection for an extermination."

However, Marta Lempart, the organizer of both the Women's Strike in 2016 and last week, does not feel that way. Although she is a self-identified feminist, Lempart says that abortion is a personal issue. A close family member was pregnant and denied prenatal tests in Ireland — a country with a similar stance on abortion.

"She gave birth to a baby who wasn't able to live, and she had to watch it die. The baby died after two days," Lempart explains. "Over my dead body that [the government] forces someone to go through that. You can't force women to go through this kind of trauma."

Last week — on the same day they moved forward with the anti-abortion bill — parliament rejected a bill proposed by women's rights groups that would not only liberalize abortion but would provide access to contraception and sex education.

Lempart says she feels ashamed of the Polish government. She explains that when the government seriously considered banning abortion in 2016, women in Poland felt the "government thinks they’re too stupid to make these decisions on their own." She says this is what motivated her to organize the Women's Strike.

Between the 2016 protests and now, Poles have shifted their opinion on abortion. In the latest Ipsos survey, as much as 42 percent of the population support a woman's right to choose. Lempart doesn't feel the government is mirroring that change in opinion.

"Whatever happened before, whatever we thought about the politicians, there was a certain level of respect," Lempart says. "It's not there anymore ... They took this away from me, and I hate them for that. I want the state to be something we are proud of."

Last week, the lower house voted late to send the bill to a parliamentary committee. For now, Lempart and the rest of the Women's Strike are waiting, ready to mobilize again.