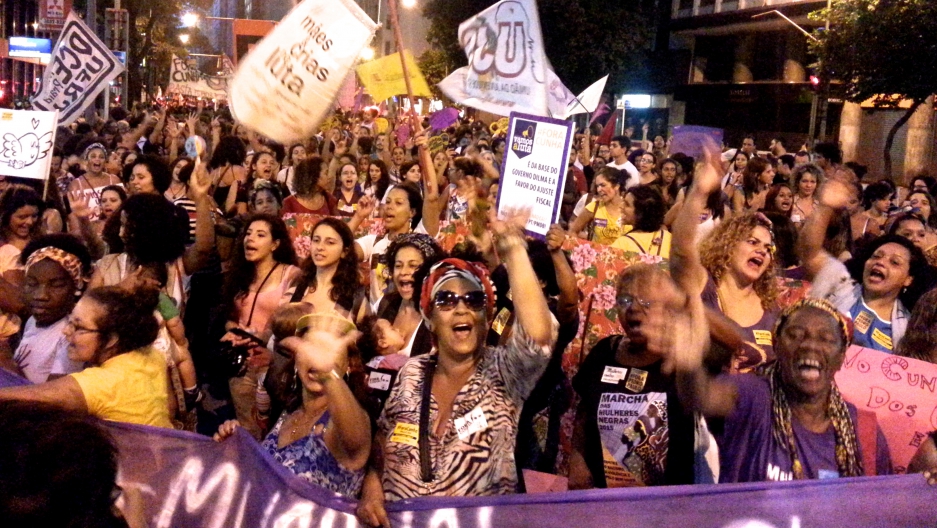 In Brazil, an impeachment process that opened this month against the president is only part of the current power battles in Congress. The president’s opponents are also trying to restrict Brazil’s limited access to abortion, in a move that’s received blowback from women across the country.

Abortion is legal in Brazil only in cases of rape, a brain defect in the fetus, or a life-threatening pregnancy. But even then, it’s not easily accessible. In the state of Rio, home to 16 million people, there is just one doctor in the public health system who performs legal abortions.

Julia Viana, who asked us not to use her real name, works for a public health NGO and deals with these issues up close. Before becoming a mother of three, she herself got an illegal abortion in the late 80s; this year, when Viana’s daughter got pregnant, she supported her daughter's decision to end the pregnancy.

Viana says in the past, women seeking abortions had more options — even if they were underground clinics. It was relatively easy to find a doctor who did the procedure and wouldn’t report you. Now, she says, it’s a very different story.

When Viana asked her colleagues at work where to get a safe abortion these days, she says they told her to hush up. “They looked at me funny, saying ‘You're exposing yourself.’”

She found that underground clinics had closed across Rio in the last few years.

Viana says that intensifying politics around abortion in Brazil have put police under more pressure to make arrests for something to which they previously turned a blind eye. She adds that doctors who attend rape victims are known to lecture their patients or even give subpar treatment. “I hear reports of procedures done without anesthesia and doctors racking up wait time, with the idea of sending women the message, ‘You’re responsible for this.’”

If a bill in Brazil's Congress passes, rape victims will also have to register at a police station and get their bodies inspected in order to get treated at the hospital, be it for an abortion or for regular attendance after rape, which includes medicine to prevent HIV and the morning-after pill to prevent pregnancy. Activists say this will discourage women from seeking the healthcare they need, especially in many neighborhoods where police aren't trusted.

Last month, thousands of women in Rio protested against this bill.

They shouted “In with the morning after pill, out with Cunha” — as in Eduardo Cunha, the bill’s author. Cunha is Brazil's speaker of the house. Before entering politics, he was a neopentecostal radio host. Now he’s a controversial politician — pushing to impeach Brazil’s president on corruption charges, but under investigation himself for bribery. Meanwhile, he’s pushing far-right issues in Brazil’s Congress, like the bill on abortion.

“My supporters, who voted for me, think this way,” he said to reporters about the abortion bill. Cunha got elected calling to make access to abortion more difficult; he says it is murder and should be treated as such. He’s backed by over 90 Congressmen in what’s known as Brazil’s evangelical caucus.

Julia Viana says the influence of religion in Brazil’s politics right now is already causing Brazil’s estimated 1 million women per year who get abortions — of which roughly 99 percent of them are illegal — pay more for things that are less safe.

Viana’s daughter opted to pay $300 for an ulcer medication that when taken in high doses, induces abortion. Viana says women who can’t afford that take drugs of unknown compositions, or drink a tea made from cannabis seeds. Some women resort to scraping out their uterus at home with knitting needles or surgical tools. In Brazil, complications from unsafe abortions kill a woman every other day, with black women dying 2.5 times as often as white women.

Viana says what gives her hope is seeing different social classes of Brazilian women united around this issue today. She was born in 1964, the year Brazil’s military took power in a coup, and grew up through the long struggle to build a democratic country. At the time, she remembers considering abortion rights a middle class issue that could be figured out when basic democratic structures were in place.

“It’s not just election results, but also individual liberties,” she says, such as women having control over their lives, “that make a true democracy.”