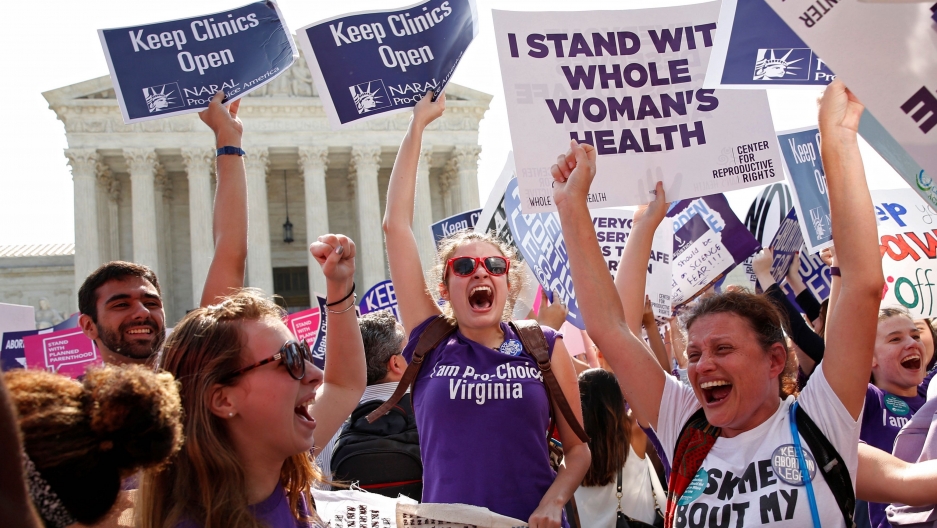 Demonstrators celebrate at the US Supreme Court after the court struck down a Texas law imposing strict regulations on abortion doctors and facilities that its critics contended were specifically designed to shut down clinics in Washington, June 27, 2016.

Monday marks 45 years since the Supreme Court issued its landmark ruling in the case of Roe v. Wade. The 7-2 decision guarantees that women have a constitutional right to choose to have an abortion.

But it wasn’t always that way.

Today, Barbara — she didn't want her full name used due to the sensitive nature of her story — is nearly 80 years old. She had an abortion in the mid-1950s in Oklahoma, one of 30 states where the procedure was illegal prior to 1973. Back then, there were physicians who would perform abortions, but it had to be done secretly and it came with great risks both for the doctors who faced persecution and for the women who risked injury, abuse and even death.

“I asked my girlfriend if she could help me, and she gave me the number of a guy who did abortions,” she says. “I didn’t know anything about him. Back then, you just took your chance.”

She went to a strange house in northern Tulsa. The screen door was falling off. She went inside, climbed up on the kitchen table and hoped the man examining her was a doctor. He asked for $200 to do the procedure — money that Barbara, then 18 and working as a typist, simply didn't have. She left, relieved she hadn’t been sexually assaulted.

“I left there crying,” she says. “I was just thankful I hadn’t been raped because a lot of these guys raped women whenever they did this.”

Still desperate, Barbara sought out a different path. She asked her friend to get her some pills. Barbara took them and experienced extreme pain and some initial bleeding, but was unable to terminate her pregnancy. She then decided to seek a doctor's help.

“He said, ‘You need to get over to the hospital,’” Barbara says. “They pushed me down the hallway to the operating room. On my chest, they had put a sign that said, ‘Incomplete Abortion.’ This was a Catholic hospital, by the way. They operated on me and saved my life because the doctor said if I had not gone then — if I had waited 24 hours — I would have been dead.”

Two decades later, the Supreme Court's ruling in Roe v. Wade to allow abortion, in part, aimed to help millions of women gain access to the procedure safely — with certified doctors who would operate in clinics and hospitals and not on kitchen tables.

Today, Roe v. Wade is still the law of the land, but it’s been significantly rolled back in recent years.

Related: Meet the women who escorted Jane Doe to her abortion

“We’ve had 401 abortion restrictions enacted since January 2011,” says Elizabeth Nash, senior state issues manager at the Guttmacher Institute, a research organization that advocates for reproductive health rights and policy in the United States. “That’s about one-third of the number of abortion restrictions since Roe was decided in January 1973.” 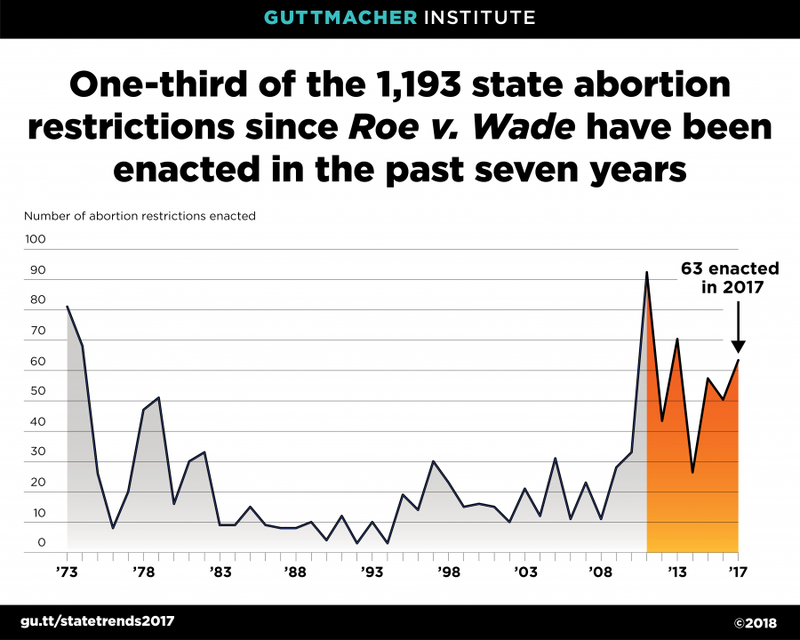 According to Nash, the rollbacks have made it much more difficult for many women, particularly in the Midwest and South, to get an abortion.

The abortion rate has been declining since 1980, but there’s a particular decline between 2008 and 2014 — the latest year that there is available data. Between 2008 and 2011, the unintended pregnancy rate also declined.

“That is, in part, a reason why you’d see fewer abortions,” says Nash. “But also, we were seeing abortion patients, and women in general, using contraception, particularly what we call long-acting methods, like [intrauterine devices], and those methods are very effective [at preventing pregnancy]. That’s one factor in why you’re seeing a reduced abortion rate.”

Though unintended pregnancy rates have fallen while access to long-term contraception has increased, Nash says some abortion clinics also rapidly shut down in numerous states between 2011 and 2012. Additionally, a general lack of access to abortion in certain areas may also have contributed to the downturn.

“What we were seeing around 2011 was that a number of state legislatures had shifted much further to the right along with some governorships,” says Nash. “We saw that similarly happen in 2016 in Iowa and Kentucky, and in both of these states, we've started to see more abortion restrictions.” 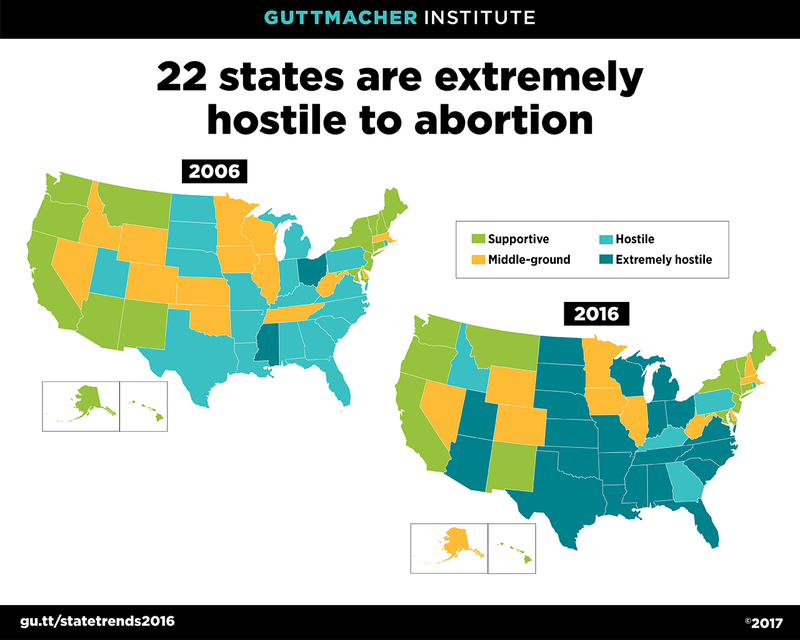 In addition to state legislatures, the abortion issue is also coming to the courts. For example, at least eight states have enacted bans on some abortion procedures after 12 weeks of pregnancy; six of those bans have been challenged, and some of those cases have the potential to reach the Supreme Court.

“What we’re seeing in state legislatures right now, particularly in the states where a number of abortion restrictions have been enacted, are bills being introduced that would completely ban abortion — not just at a waiting period or limit abortion coverage in your health plan, but completely ban abortion,” she says. “The point of these bills is really to instigate a challenge to Roe [before the Supreme Court].”

Right now, Nash says there are still five Supreme Court justices that have supported abortion rights, but that could change.

“As we go further into the current administration, we may see one of these five [justices] retire,” she says. “At the state level, what that means, social conservatives want to push through an abortion ban so that when the Supreme Court moves further to the right, the court case will be primed.”