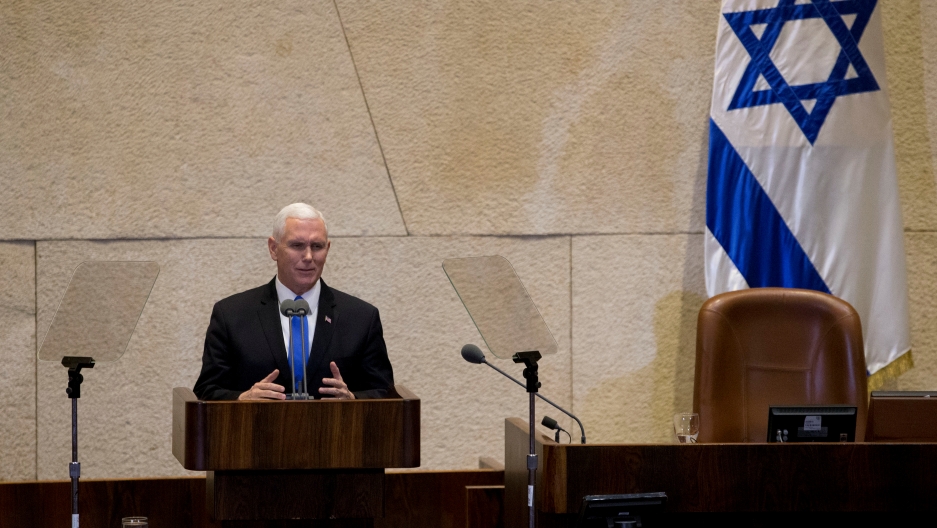 The Trump administration is changing the Middle East and the role of the United States there.

Vice President Mike Pence spoke to the Israeli Knesset, or parliament, on Monday. “Jerusalem is Israel's capital,” he said, “and as such, President Trump has directed the State Department to immediately begin preparations to move the United States embassy from Tel Aviv to Jerusalem."

Related: Guatemala joins the US in recognizing Jerusalem as Israel’s capital, while Pope Francis calls for a negotiated solution

That decision is just one of many moves by the Trump team to shift US policy in the Middle East.

Another is the open embrace of Saudi Arabia and the confrontation with Iran. Then there's the decision to slash aid to the Palestinians. And the decision last week to go back to a policy of pursuing regime change in Syria. The list goes on.

Related: Christmas in Bethlehem goes on in the shadow of Trump's Jerusalem announcement

“It’s hard to figure out what US policy is about at this point,” says Borzou Daragahi, Middle East correspondent for BuzzFeed News. “In many ways, it seems contradictory.”

As an example of those contradictions, Daragahi highlights the administration’s efforts to patch up relations with Russia while at the same time confronting Iran. “I don’t think that’s going to work,” he says, “because the Russians and Iranians are very closely allied and they have an agenda that’s very much in tandem.”

“Of course, the US and Trump administration have a solid relationship with Saudi Arabia and with Israel, but they seem to be alienating just about everybody else,” he explains.

Relationships with allies like Turkey, and the Kurds in Iraq and Syria, are seriously strained, Daragahi points out. “There’s a lot of questions about where this is all headed and whose side the US is on, at this point.”

“A lot of these moves seem rather incoherent because they are incoherent,” concludes Daragahi, “because they don’t make sense, and they contradict US aims.”

To hear more from Borzou Daragahi on The Trump administration's wavering Middle East policy, listen above.