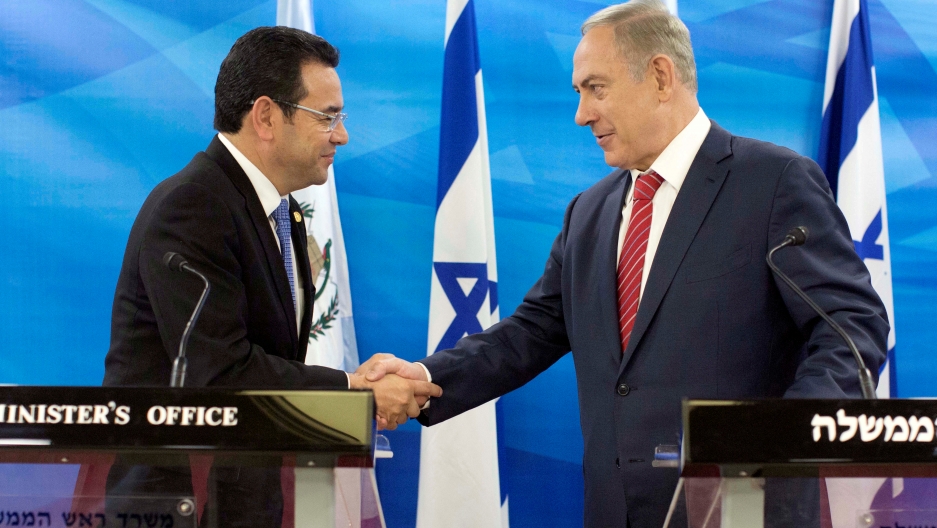 Guatemalan President Jimmy Morales and Israeli Prime Minister Benjamin Netanyahu shake hands as they deliver statements to the media during their meeting in Jerusalem, Nov. 29, 2016. On Dec. 24, Morales announced that Guatemala will recognize Jerusalem as the capital of Israel, following a similar announcement by US President Donald Trump on Dec. 6, 2017.

The president of Guatemala announced Christmas Eve that the Central American country will move its embassy in Israel to Jerusalem.

President Jimmy Morales announced on Facebook that, after speaking with Israeli Prime Minister Benjamin Netanyahu Sunday, he has instructed the chancellor to begin the process of moving the embassy.

On Dec. 21, the United Nations General Assembly voted overwhelmingly to reject US President Donald Trump’s Dec. 6 announcement that the US will recognize Jerusalem as Israel’s capital. US endorsement of Israel's claim to all of Jerusalem as its capital reverses longstanding US policy that the city's status must be decided in negotiations with the Palestinians, who want East Jerusalem as the capital of their future state. One hundred and twenty-eight countries voted for a resolution condemning the US decision.

Guatemala was among nine countries that voted against the resolution.

US Ambassador to the United Nations Nikki Haley had strong words for the delegates after the resolution passed. "The United States will remember this day in which it was singled out for attack in the General Assembly for the very act of exercising our right as a sovereign nation," she said. "We will remember it when we are called upon to once again make the world's largest contribution to the United Nations.”

Also: What a cut to its UN funding does to US leverage in the world

“The Christmas lights are very beautiful this year,” says Nabil Giacaman, whose family has a store on Manger Square in the West Bank city of Bethlehem. “But we have no Christmas spirit. I want to rejoice, but I have no happiness, no hope. Not since [US President Donald Trump] announced that Jerusalem is the capital of Israel.”

Palestinians have long claimed that Jerusalem will be the capital city of the future Palestinian state, and almost all proposed peace plans for the region envision some sort of sharing of the city between Israel and Palestine.

Pope Francis, leader of the world’s 1.2 billion Roman Catholics, used his Christmas message on Monday to call for a negotiated two-state solution to end the Israeli-Palestinian conflict.

“Let us pray that the will to resume dialogue may prevail between the parties and that a negotiated solution can finally be reached, one that would allow the peaceful coexistence of two states within mutually agreed and internationally recognized borders,” he said, referring to the Israelis and Palestinians.

“We see Jesus in the children of the Middle East who continue to suffer because of growing tensions between Israelis and Palestinians,” he said in his address, delivered from the balcony of St. Peter’s Basilica to tens of thousands of people.

It was the second time that the pope has spoken out publicly about Jerusalem since Trump’s decision on Dec. 6. On that day, Francis called for the city’s “status quo” to be respected, lest new tensions in the Middle East further inflame world conflicts.

Giacaman and many other Palestinians told PRI that Trump’s Dec. 6 recognition of Jerusalem as Israel’s capital and decision to move the US embassy to the city has dampened the holiday mood.

With additional reporting by Eetta Prince-Gibson and Reuters.