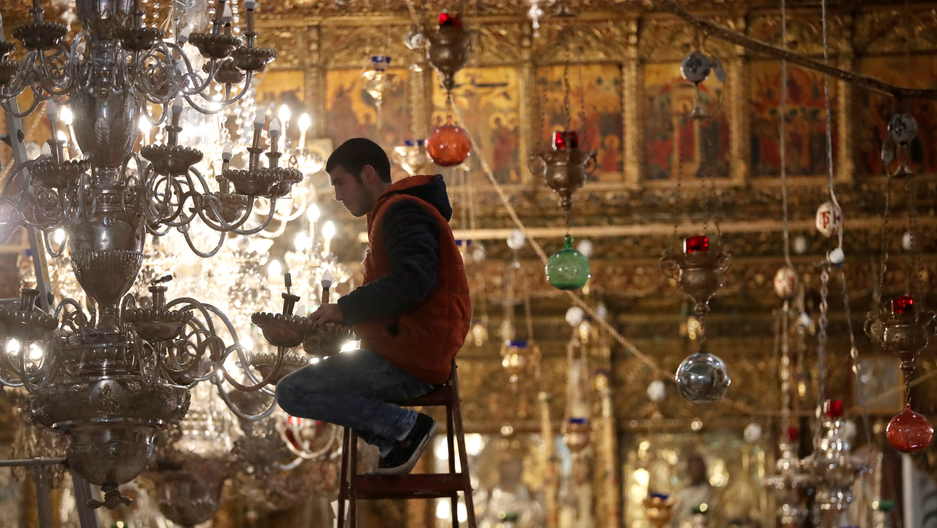 A worker prepares lights ahead of Christmas celebrations in the Church of the Nativity in the West Bank city of Bethlehem, Dec. 19, 2017.

On an unseasonably warm night, a few days before Christmas, Manger Square in the West Bank city of Bethlehem is lit with thousands of bright lights and a huge, twinkling Christmas tree. In the center of the square, a large manger scene has been set up, and parents explain the birth of Jesus Christ to their children. Vendors hawk Christmas decorations and sahlab, a traditional drink made from the ground-up bulbs of orchids.

Across from the square is the Church of the Nativity, a UNESCO World Heritage Site. There, in a small grotto, devout Christians kneel down and kiss the multi-pointed star that marks the exact site where Christ is believed to have been born. The ancient stone walls and marble columns sparkle and the faint scent of bleach wafts in the air as workers clean nonstop to prepare for the thousands of anticipated pilgrims and worshippers.

The square is surrounded by stores under a colonnade. A huge banner hangs over them, reading, in English, “Jerusalem will always be the eternal capital of Palestine.”

Near the banner, Nabil Giacaman stands in his family store, selling intricate carvings made from olive wood and mother-of-pearl along with religious trinkets and tourist souvenirs. Wearing plastic-framed glasses and a fashionable sweatshirt, he looks out to the square. “The Christmas lights are very beautiful this year,” he says. “But we have no Christmas spirit. I want to rejoice, but I have no happiness, no hope. Not since [US President Donald Trump] announced that Jerusalem is the capital of Israel.” 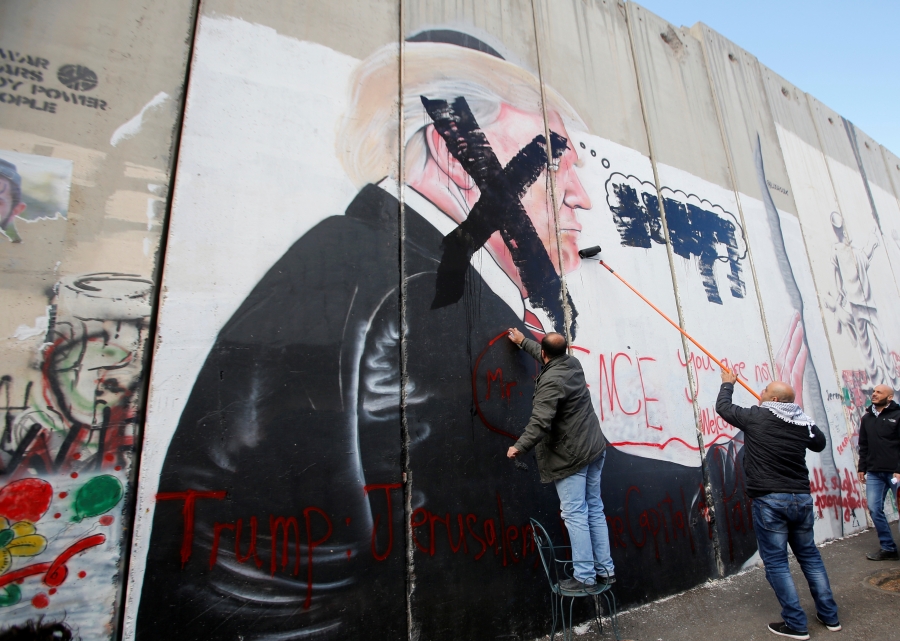 Men paint over a mural depicting US President Donald Trump painted on a part of the Israeli separation barrier, in the West Bank city of Bethlehem, Dec. 7, 2017.

The hotels in Bethlehem are at full capacity, according to Palestinian Tourism Ministry Public Relations Director Jeries Qumsieh. “Restaurants are busy, there are many tourists and pilgrims. We are expecting a wonderful Christmas.”

But like most people that PRI spoke with, Qumsieh acknowledges that Trump’s Dec. 6 recognition of Jerusalem as Israel’s capital and decision to move the US embassy to the city “has put a damper on our mood.”

Palestinians have long claimed that Jerusalem will be the capital city of the future Palestinian state, and almost all proposed peace plans for the region envision some sort of sharing of the city between Israel and Palestine. Trump’s announcement has been viewed here as a slap in the face and a betrayal of the US’s role as an impartial moderator.

Maryam, a nurse who gives only her first name and lives close to the square, says the announcement is an insult to Palestinians even if it changes nothing on the ground.

“We know that the announcement has no practical meaning,” she says. “Jerusalem has been occupied by Israel since 1967, and I don’t believe the embassy will move soon.

“But the announcement shows that Trump simply doesn’t care about us. Couldn’t he have waited until after Christmas? As a Christian, I will celebrate the birth of Christ with my family. But as Palestinians, it is hard to feel joy.”

The announcement led to demonstrations in Jerusalem and the West Bank, and internationally. In Bethlehem, there have been sporadic demonstrations, too, but they have been largely confined to a two-block area about a mile from Manger Square. 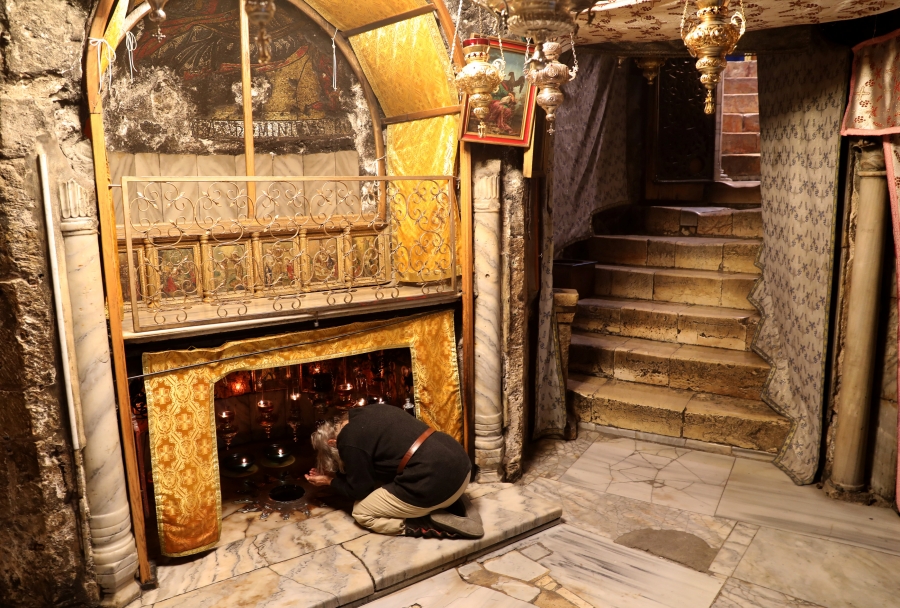 A woman prays in the grotto where Jesus Christ is believed to have been born at the Church of the Nativity in the West Bank city of Bethlehem, Dec. 19, 2017.

It wasn’t clear whether Christmas would proceed as usual in the region. The mayor of Nazareth, where scripture says the angel Gabriel told Mary that she would conceive by the power of the Holy Spirit and where Jesus spent his childhood and youth, threatened to cancel all Christmas festivities except for prayers and masses, but then changed his mind; activities are proceeding as planned. And the Christmas lights in Bethlehem were off for a few days, too. But at a press conference on Wednesday, Archbishop Pierbattista Pizzaballa, the apostolic administrator of Jerusalem and Bethlehem, stated that the church will not cancel any scheduled events. “We celebrate Christmas with joy, and we will not give up our public expressions of joy, no matter what any political leader says,” he said.

According to the Israeli Ministry of Tourism, about 35,000 pilgrims are expected to cross Israel’s checkpoint into Bethlehem during the next few weeks. While the Western churches observe Christmas on Dec. 24-25, the Eastern churches, due to the discrepancies between the Julian and Gregorian calendars, observe Jan. 7. The Armenian Apostolic Church observes Jan. 6, marking both Christmas and the Epiphany, which celebrates the visit of the Magi and the baptism of Jesus Christ.

Each observance is celebrated with an official procession by religious leaders into Bethlehem, accompanied by Palestinian scout groups performing bagpipe and brass versions of “Jingle Bells” and other Christmas songs, followed by services in the Church of the Nativity, according to the different traditions. 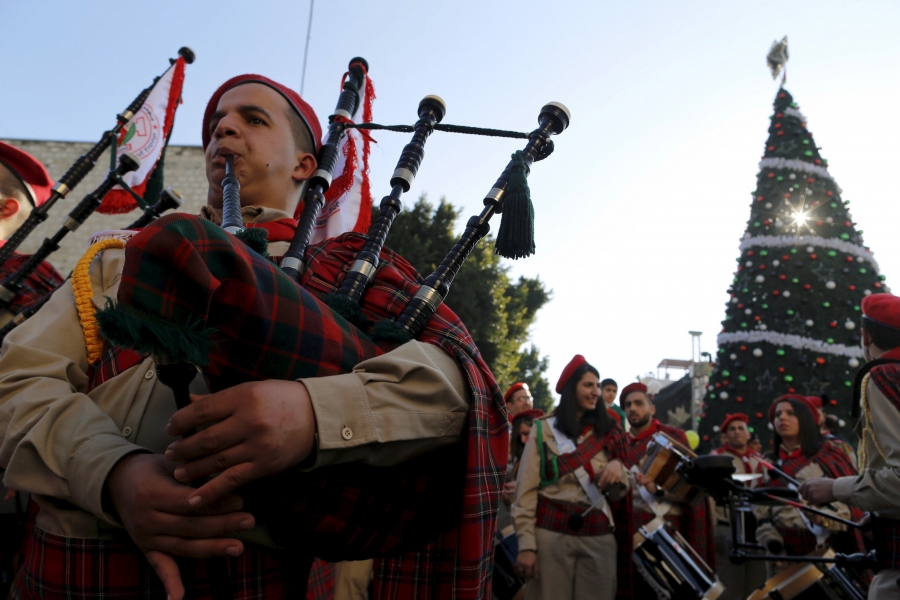 A Palestinian marching band parades during a Christmas procession at Manger Square in the West Bank city of Bethlehem, Dec. 24, 2015.

Except for a few roundabout, sporadically policed routes, access to Bethlehem is from Jerusalem and requires crossing a 27-foot-high checkpoint manned by Israeli security authorities. Popularly known as “Checkpoint 300,” it is part of the separation wall Israel began building during the second intifada in 2002. According to Palestinians and much of the international community, the wall, together with Israeli settlements in the area, is part of ongoing Israeli land grabs that have cut Bethlehem off from both Jerusalem and the rest of the West Bank. Bethlehem itself is policed by the Palestinian Authority.

Israeli authorities have announced that they will be providing free shuttle bus service from points in Jerusalem to the checkpoint, a distance of about 7 miles. Samir Hazboun, head of the Bethlehem Chamber of Commerce, is confident that cooperation between Israeli and Palestinian security officials will ensure safe, calm passage. “All sides have an interest in making sure that Bethlehem is quiet so as many people as possible can visit and observe this holiday,” he said.

“I believe that the holiday will pass quietly,” says Giacaman. “Since Trump’s announcement, almost no one has any hope or energy to demonstrate. My family has been here since 1635, and I am the third generation of artists. I will be here until I die. I will celebrate the birth of Christ. But I know that the land of Jesus will always cry.”