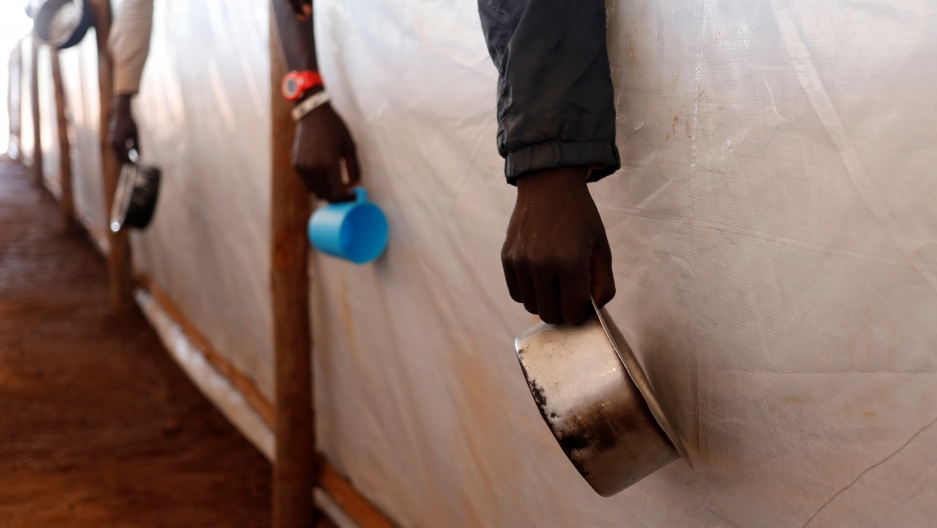 South Sudanese refugees wait in line for food in Omugo refugee settlement camp in northern Uganda. Or are they not Ugandan non-refugees? Sometimes officials cannot tell the difference.

As the intense heat of the midday sun beats down, Gladys Nekesa is often found standing in line to receive food at a refugee shelter in northern Uganda.

Nekesa, though, is not one of the nearly 285,000 South Sudanese refugees living in the Bidi Bidi refugee camp. She is a Ugandan from Gulu, a district about 100 miles away from the shelter site.

“I’m very hungry so I am pretending to be a refugee to get food for my family,” said the 28-year-old mother of five. “The hunger is biting all of us in this region, and the government is only concentrating on refugees. We have no option other than to pretend to be refugees.”

More than 1 million South Sudanese refugees are sheltering in 14 camps in northern Uganda, according to the United Nations. But nowadays Ugandans in the drought-stricken north who have lost their crops and livestock have resorted to disguising themselves as South Sudanese refugees to gain access to grain, flour and high-energy biscuits that the government, UN and humanitarian organizations distribute to refugees in the shelters.

“I’m not the only person from Acholi tribe here disguising myself as a refugee,” said Nekesa, referring to her ethnic group, as she carried a sack of grain away from a camp warehouse. “We are very many people who have become refugees to survive the biting hunger. The advantage is that officials cannot differentiate between Acholi from Uganda and [those from] South Sudan.”

There are approximately 2 million Acholi living in northern Uganda along the border of South Sudan. Tens of thousands also live in South Sudan.

Many South Sudanese Acholi have fled south to Uganda since civil war enveloped their young country in 2013. After gaining independence from Sudan, disputes between the country’s two major tribes eventually turned violent. President Salva Kiir is a Dinka, the largest South Sudanese ethnic group, while former vice president and rebel commander Riek Machar is a Nuer, the second largest.

Parts of East Africa are struggling with the worst drought in more than half a century. More than 11 million people in Uganda were facing food shortages and 1.6 million were on the verge of famine, according to a January report by the Ugandan government. Officials added that a total of 17 million people in the region, including Ethiopians and Kenyans, face similar dangers. 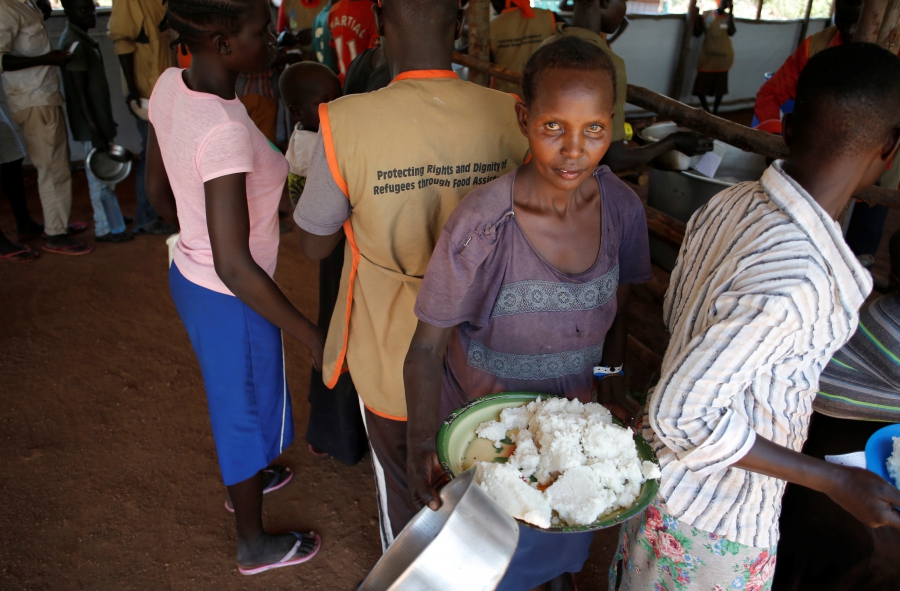 “Most regions in northern Uganda are facing severe food crisis and the government has been trying to send food to these regions,” said Christopher Kibazanga, Uganda’s agriculture minister. “But there is fear if individuals and families do not manage the available food stocks at household levels well, the situation can quickly deteriorate to the emergency and famine stages of food insecurity.”

The hunger that the people of Acholi and other tribes in the north have suffered this year is not a one-off occurrence. It has happened repeatedly for the last several years, with Ugandans complaining of insufficient government interventions to end the problem.

Entering the camp at Bidi Bidi recently was Sarah Akumu, 33, struggling to hold her two remaining children with one hand as she held a suitcase in the other. She lost her 3-year-old son to hunger in February.

“I’m very tired and hungry,” she lamented. “Life is not easy outside here. I have decided to save my life and those of my children by going to the camp. I will tell the officials that I came from South Sudan.”

Homes in the region are deserted, said Akumu and others. Children have dropped out of school due to hunger. Internally displaced Ugandans trek along main roads, carrying bundles of luggage as they head to the refugee camps.

“Life is not easy outside here. I have decided to save my life and those of my children by going to the camp. I will tell the officials that I came from South Sudan.”

The issue of Ugandans seeking food aid has given South Sudanese leaders cover for the massacres and human rights abuses that have allegedly occurred on their watch.

President Kiir has disputed the number of South Sudanese refugees in Uganda, for example. Recently, the UN recorded close to 10,000 refugees following a recent attack by government troops on the town of Pajok and Yei in South Sudan. But South Sudan’s presidential spokesman, Ateny Wek Ateny, discounted that amount.

“I think the officials at the camps are exaggerating the number of people being displaced. There are fewer than 1,000 residents in the town of Pajok,” Ateny said. “The rest could be Ugandans of the same Acholi tribe trying to get free services and food.”

Related: Uganda has been a welcoming place for South Sudan's refugees

George Okumu, a Ugandan local government official, acknowledged that locals were disguising themselves as refugees to receive food. But he discouraged it.

“I think there could be a possibility of locals trying to disguise as refugees to get free food simply because of the current hunger ravaging the country,” Okumu said. “But this is not allowed at all and anyone found will be arrested.”

Okumu couldn’t say if anyone had been arrested, however.

But Nekesa said she would continue to seek out food aid to feed her starving children.

“I can’t afford to leave my children to die,” she said. “I will continue to receive my share of food when they distribute it. South Sudanese are not more important than us. They are in our country.”