Business is slow for Nelson Doko. The 27-year-old South Sudanese refugee sells candy, soap, cigarettes and other small items at his shop in Uganda’s Bidi Bidi refugee settlement, behind a stylized sign reading “Welcome to California."

But there are few customers these days.

“There’s no money,” he complained.

There are more than 1 million South Sudanese refugees living in Uganda, fleeing a nearly four-year civil war that has split backers of President Salva Kiir, a Dinka, against former Vice President Riek Machar, of the Nuer ethnic group. More than one-quarter of the refugees live in Bidi Bidi, which opened in August 2016. With 285,000 residents, it's now the world’s largest refugee camp — bigger even than the Dadaab refugee camp in Kenya, which has long held the title and been open since the 1990s. 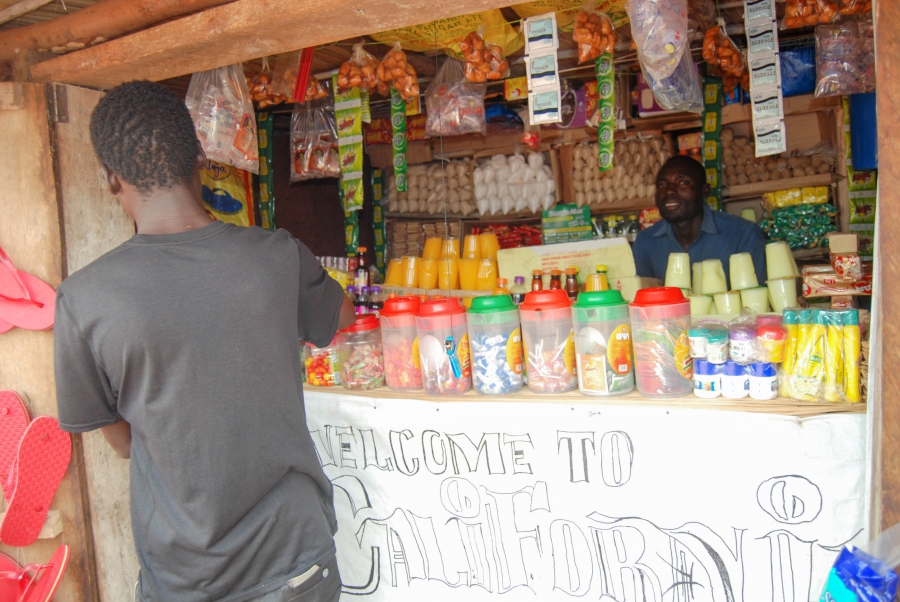 Nelson Doko sits behind the counter of his small shop in Uganda's Bidi Bidi refugee settlement. Business is slow, he says, since nobody has any money.

There are no longer thousands of new refugees arriving at Bidi Bidi each day, as there were several months ago. Now, on its first birthday, the settlement is preparing for the likelihood that many of its residents will stay for years — or perhaps permanently. In the words of the United Nations’ refugee chief, these refugees are likely in for “a long-term exile.”

“[If] there is peace there [in South Sudan], maybe we can come and go back,” said Doko, whose brother was killed in the war. “But [if] it will be like this? No.”

Bidi Bidi isn’t going away. Instead, over the next decade it will be transformed into “a big city” with factories and shopping centers, predicted Robert Baryamwesiga, the settlement’s government overseer.

“I’m actually more optimistic than ever now,” he said. “Because I see more creative ideas from the refugees themselves. I see them try to engage now in livelihood programs.” 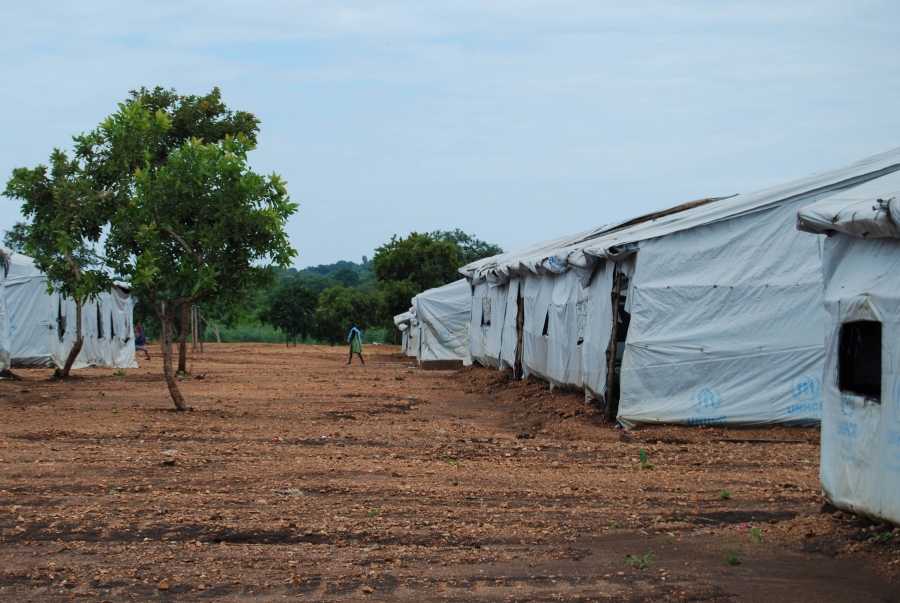 A refugee walks through the central reception area of the Bidi Bidi settlement. New arrivals are sent to other camps in Uganda, so this area is now largely deserted.

The settlement’s population is already larger than most Ugandan cities.

But Bidi Bidi is a sprawling, rural area of bureaucratic zones and planned villages that looks, for now, nothing like a city. There are marketplaces scattered throughout and a growing commercial area near the main entrance, but little of a central hub.

In a decade, Baryamwesiga predicts that Bidi Bidi’s population might double or even quadruple in size.

“It’s possible that that place can host even a million people,” he said. “What we need to fix are social amenities, make sure that there are schools, there are health facilities, and so forth.”

In general, Uganda has been praised for its unique refugee policy, which welcomes migrants, allows them to travel freely and gives them a plot of land on which to build a home. If not for the UN’s distinctive tarpaulin or occasional aid group signs, parts of Bidi Bidi could be mistaken for neighboring Ugandan villages.

Uganda’s refugee system rests on a requirement that all aid groups working with refugees devote 30 percent of their projects to local Ugandans. Locals benefit from the new schools and health centers, and some get high paying jobs with international aid groups. In effect, the policy acts as a sort of development program for Uganda’s impoverished northwest and earns goodwill abroad. 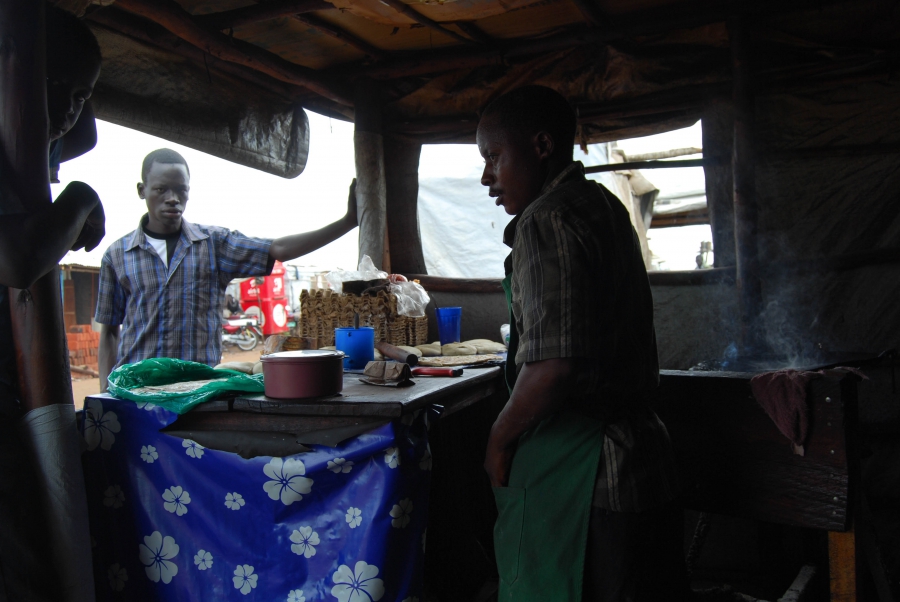 For decades, Uganda has accepted refugees from virtually all its neighbors. Many refugees have remained for long periods of time.

“They have been integrated within the community,” said Naku Charles Lwanga, the Uganda country director for the Real Medicine Foundation, which operates in Bidi Bidi. “Sometimes it is very difficult to identify who’s a refugee and who is a Ugandan.”

“If the policy remains friendly the way it is, the refugees after maybe 10 years [or] 20 years, they’re just totally integrated," he said.

But money is tight. The UN has received just 29 percent of the $674 million it has requested to respond to the South Sudanese refugee crisis. Locals are starting to complain that there aren’t as many jobs or facilities as they had expected.

From his small shop, Doko has seen the beginnings of Bidi Bidi’s evolution.

A few feet up the road there’s a primary school made from brick and mortar, instead of the tents that have been used across most of the settlement. Most families, too, have built permanent mudbrick homes to replace the temporary structures from the early months. Water shortages used to be common, but are increasingly rare thanks to new boreholes. 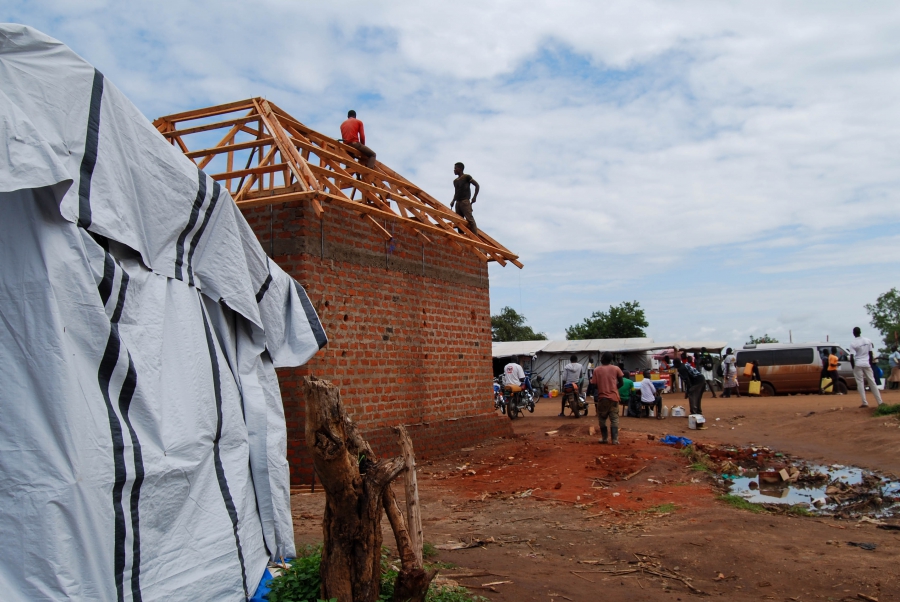 Men build a brick shop near the entrace of Bidi Bidi. Most of the buildings are temporary, but slowly permanent structures are rising up.

Still, the miles of dirt roads can wash away or flood during seasonal rains. There are few opportunities for older children to attend secondary school, much less vocational training for adults.

Refugees in Bidi Bidi struggle to earn an income. Many rely on rations from the UN World Food Program, and some sell a portion of their rations to afford sugar, soap and other items.

The soil is too rocky and infertile for farming, refugees complain.

“They gave us some seeds to plant, but unfortunately the seeds were burned by the sunshine,” said Calisto Bonju, 23, who fled from the South Sudanese town of Yei when his neighbors’ houses were burned and looted.

“It’s a problem here to get the money.”

Still, Bidi Bidi is far preferable to South Sudan, according to Joshua Jomala.

“Even though [there are] no jobs here, but it’s better,” said Jomala, 28, who left the capital of Juba when explosive inflation caused by the war made his money worthless.

“Nothing good in that nation of ours. There is no hope.”

Even if refugees wanted to return, much of South Sudan’s southern Equatoria regions have been so ravaged by the war that there would be little left for them. Houses have been burned. Fields have gone fallow.

“There is nothing there at all,” said Ben Bero, 37, from Eastern Equatoria state. 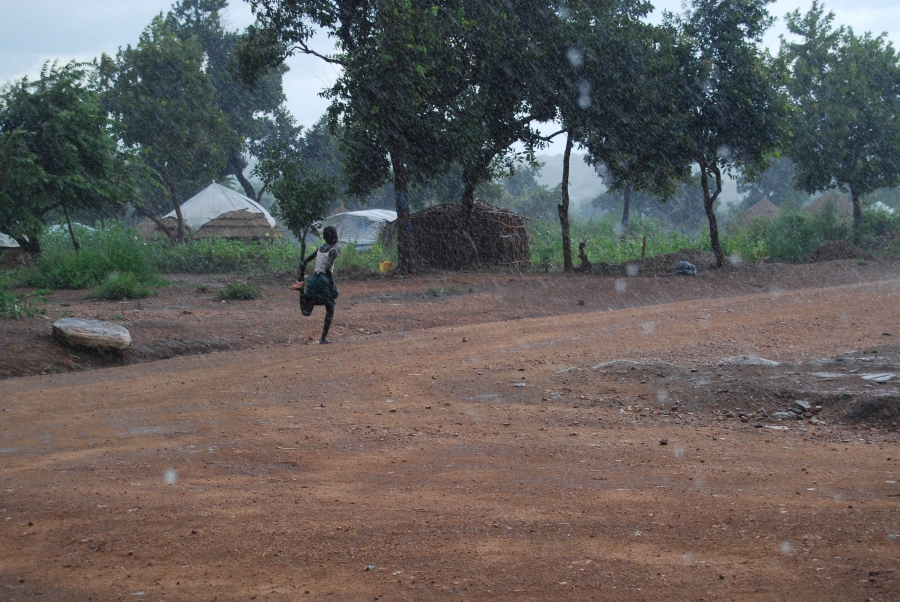 A girl runs through an afternoon rainstorm in Bidi Bidi. The rains, which come daily during certain times of the year, can flood the refugee settlement's dirt roads.

South Sudan underwent decades of conflict and destabilization under Sudan’s northern government before its independence in 2011. During that time, many South Sudanese left for Uganda, either as refugees or to look for opportunities in its schools and businesses.

John Roma, 23, was born in Uganda and lived here until he was 14 before moving to his family’s home in the South Sudanese town of Torit. Now he’s back in Uganda, living in Bidi Bidi. Even if a peace deal were signed tomorrow, Roma said, he’s wary of going back home just to become a refugee again in another few years.

“I cannot go there, because you cannot stay for 10 years and then be back here,” he said.

Yet a large, permanent city of refugees might not be acceptable to all of its Ugandan neighbors.

Related: Ugandans pose as refugees for food because the drought is so bad

Roma, who farmed back in South Sudan, said that he was threatened by local Ugandans when he attempted to look for fertile ground to plant his crops near Bidi Bidi.

Disputes between the two communities have taken place over natural resources such as farmland and firewood. Some locals have grown aggrieved that there aren’t as many jobs with international NGOs as they had expected. But the tensions rarely boil over into overt anti-refugee sentiments, residents said.

People from South Sudan with education or a little money in their pocket often travel out of the refugee settlements, to find work in nearby towns or even the vibrant capital, Kampala. 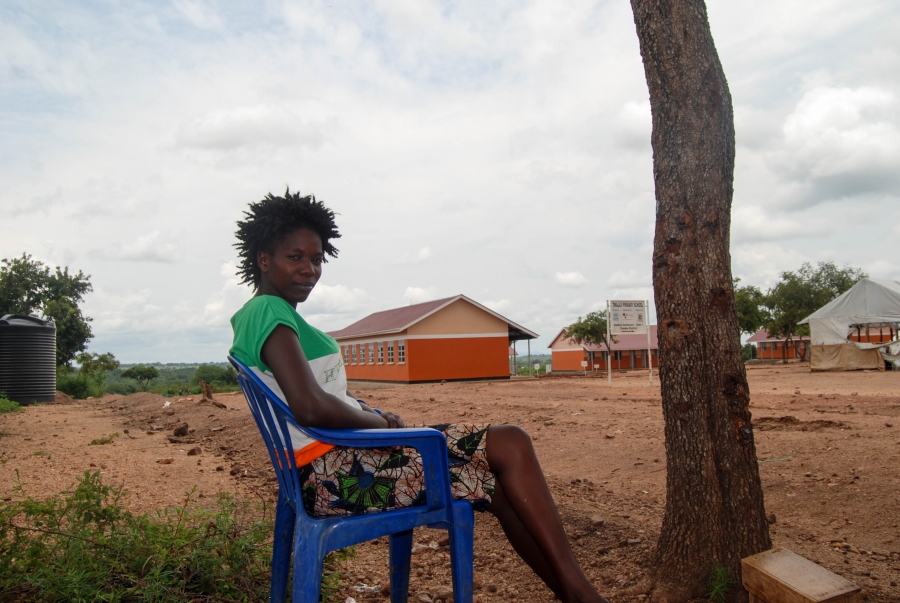 Grace Kwaje sits near her home in Bidi Bidi. Behind her, a new permanent primary school has been built next to fraying tents.

Grace Kwaje, 18, lives in Bidi Bidi, but occasionally visits aunts who work in Kampala. She couldn’t find a job, she said, so is stuck in the refugee settlement. It could be another decade until the war ends, she predicted. At that point, she might as well be Ugandan.