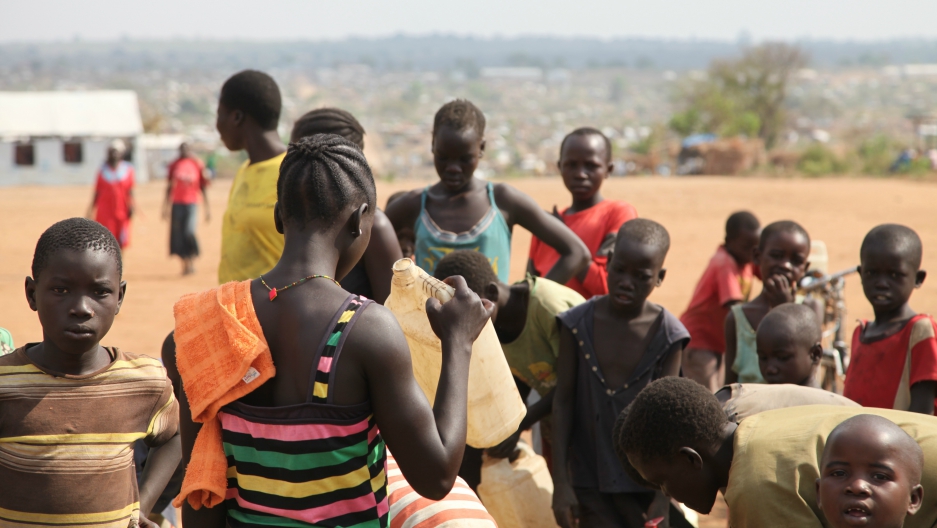 South Sudan's refugee crisis seems to be getting worse. Uganda is there to help.

Last month, the UN and the World Food Program officially declared a famine in South Sudan, brought on by drought combined with three years of civil war. The number of refugees fleeing the war has now passed the 1.5 million mark. It's become Africa’s largest refugee crisis and the world’s third largest, after Syria and Afghanistan.

Northern Uganda has received about half a million South Sudanese refugees since the conflict reignited in July.

Anywhere else, the sheer number of arrivals might cause discord — and yet in Uganda, it works.

Speaking at the headquarters of the United Nations High Commissioner for Refugees in the town of Yumbe, in the West Nile region of Uganda, Senior Emergency Coordinator Nasir Fernandes said the crisis has stretched the resources of the UN’s underfunded refugee agency. His team is working with just 36 percent of the funds required to deal with a situation of this magnitude.

“This has been a large scale emergency,” Fernandes said. “We’ve been able to do very well in terms of life saving but we have not been able to do beyond life saving. You’ve seen the structures in the settlement, they’re all very temporary.”

Still, Fernandes said, there is reason for optimism, and it all comes down to Uganda’s unusual and progressive refugee policy.

“They get 30 by 30 meters(nearly 100 by 100 feet) of residential plots and now they will be getting 50 by 50 meters of agricultural plots so they can be self-sustaining,” he said. “And once a person is registered as a refugee, [he or she] has all the documents, freedom of movement, they can go anywhere, can be employed. And that is really an example for the world.” 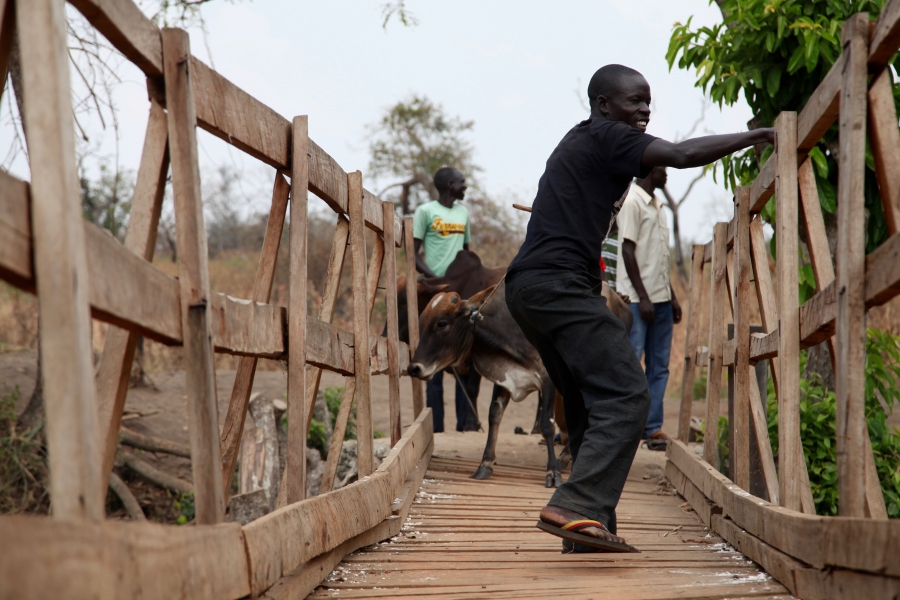 Refugees urge cows across a wooden bridge as they cross from South Sudan into Uganda.

More than 2,000 people are crossing into Uganda every day, most of them on foot in a journey that can take days or weeks. They’re fleeing government soldiers who have been burning their homes and slaughtering anyone who isn’t Dinka — that’s the ethnic group of South Sudanese President Salva Kiir.

At the Busia border crossing, a shallow river bed is all that separates South Sudan from Uganda. On a hot morning in late January, a little boy stepped onto the wooden bridge, clutching his father’s hand. A man on a motorcycle crossed next, followed by two more pulling a couple of reluctant cows, whacking them on their rumps to make them go.

A rebel soldier stood watch on the South Sudan side. He said the flow of refugees at this crossing point has been steady.

“A lot of people, there are many people,” said the soldier, who wouldn’t give his name. “We speak to them, we ask them also, 'How is the life there behind?' They say the life is hard. When they see those people, the Dinkas, they just slaughter them.” 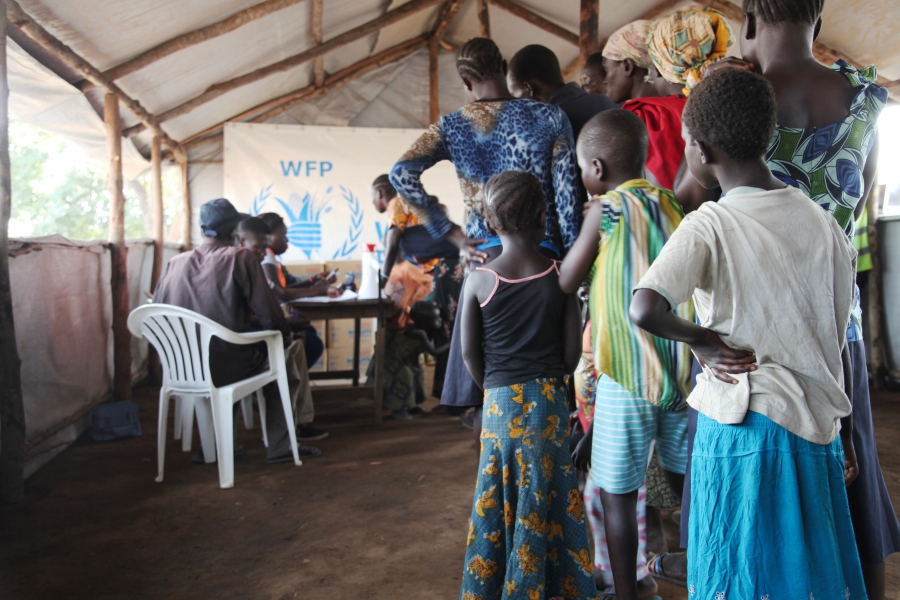 Refugees wait in line to be registered at a reception center near the border.

After the initial intake near the border, refugees from Busia and several other border crossings are funneled to Kuluba registration center, where they are registered before being bused to the settlement area where they will make their new home.

Only seven months ago, the Bidi Bidi settlement area was sparsely populated scrubland. Now it’s one of the world’s largest refugee hosting sites. After topping a quarter of a million people in December, it was closed to new arrivals. A second camp, Palorinya, was already well on its way to being filled in late January when these people were headed there.

On that single day, 4,000 people were boarding buses that would take them to the settlement zones they’d been assigned. Men and women shouldered their bedrolls and climbed aboard with children and chickens tucked under their arms. 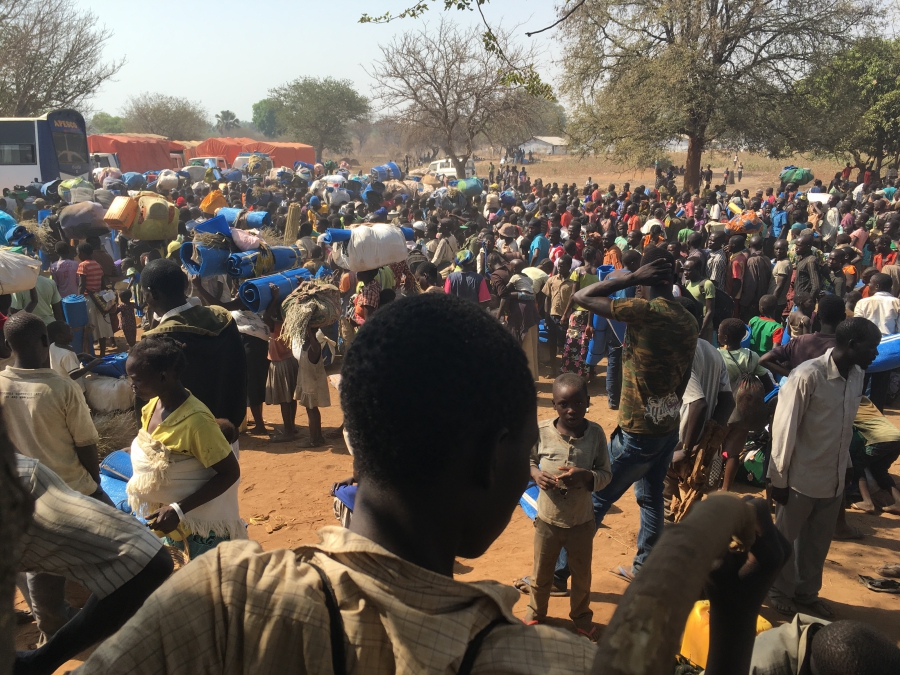 Refugees board buses at the Palorinya reception center on their way to their resettlement zones.

Asobasi Francis Wani stood in the shade under a large tree, waiting his turn and watching.

Wani was separated from his wives and four children when their village in Kajo-Keji county fell under attack by government soldiers. He returned to look for them four days later, but found the village empty and looted. So he decided to come to Uganda in hopes that they made it to safety.

“Now I am alone. That is why this card of mine, it is for single,” he said, holding up the punch card he was given when he was registered. 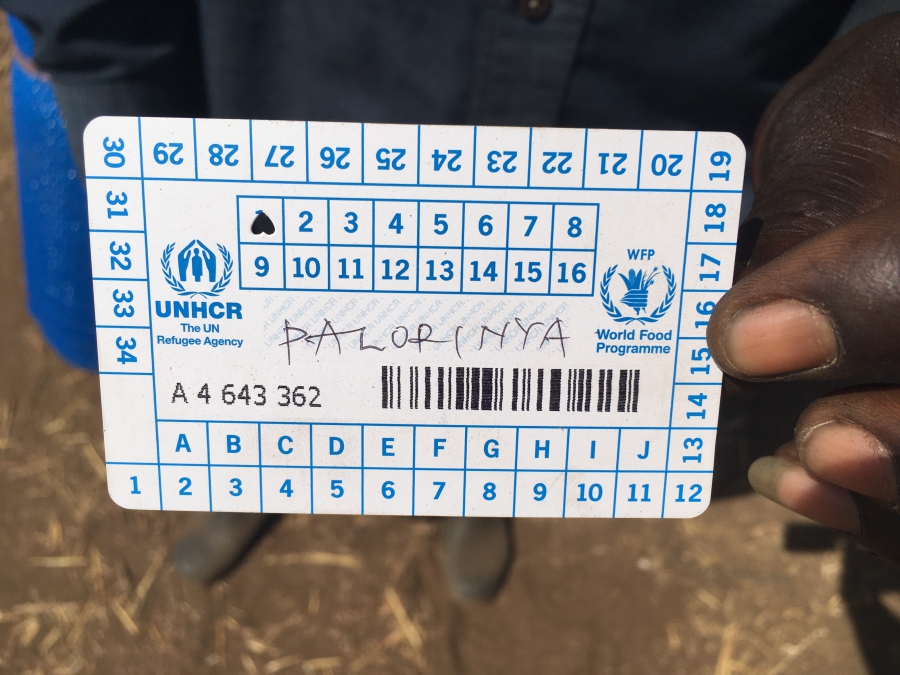 Asobasi Francis Wani hold up the UNHCR punch card he was given when he was registered, indicating that he is here alone. He was separated from his two wives and four children when his village in Kajo-Keji county was attacked. He hopes to locate his family here in Uganda.

After they board the bus, the refugees are dropped off in a dry desert area with very little shade in 100-degree heat. The first night, they sleep in the open. Over the next couple of days, they use these cards to claim rations and supplies to build a shelter — a shelter Wani hopes will one day soon hold the rest of his family.

These settlement areas are different from traditional refugee camps. It’s common to see sturdy Ugandan homes just a stone’s throw from a shelter made with UNHCR tarp.

Anywhere else, suspicion and discrimination might follow this sort of arrangement. But here in northern Uganda, the local population has been welcoming.

Business owners in Yumbe say the growing population has created opportunities. And it isn’t purely economic self-interest that makes the locals sympathetic to the South Sudanese. The communities on both sides of the border share common tribes and languages. More than that, many Ugandans know all too well what it’s like to be a refugee.

Restaurant owner Mafu Ratib fled to Sudan during the war that followed the overthrow of Idi Amin.

“They are people like us,” Ratib said. “You don’t know. One day, one time, it will also happen to you. So people are comfortable with them here.”

It’s a good thing Ugandans feel this way because the flow of refugees shows no sign of letting up. After Palorinya closed to new arrivals in late February, UNHCR opened a third refugee settlement area, Imvepi. They are preparing to receive 300,000 people this year.