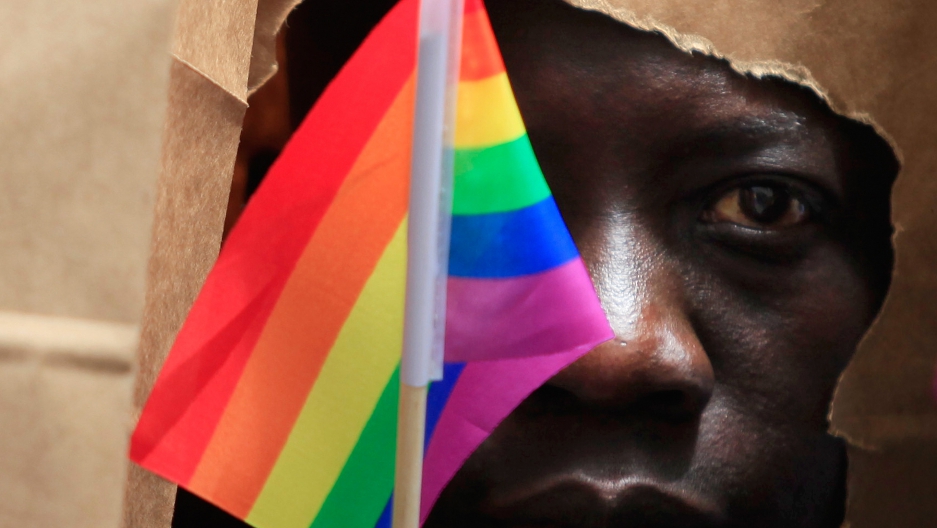 An asylum-seeker from Uganda covers his face with a paper bag in order to protect his identity as he marches with the LGBT Asylum Support Task Force during the Gay Pride Parade in Boston on June 8, 2013.

Sitting on a crate outside his mud-walled house in Kibera, the largest slum in Kenya, 30-year-old George Mukhwezi explained how he fled his home country of Uganda because he was gay.

“My life was in danger when people and the police realized I was gay,” said Mukhwezi, who arrived in Kenya last year. “I was attacked and assaulted [several times] by residents and even arrested by police. I decided to escape and save my life. Uganda is a dangerous country for LGBT people like me.”

Uganda is one of 36 African countries — and more than 70 around the world — where homosexuality is illegal. It’s a notoriously intolerant place for lesbian, gay, bisexual and transgender people, who face arrest, discrimination, eviction from their homes and violence from police and individuals. This persecution has spurred an exodus of LGBT refugees from the country in recent years. Many refugees have fled to Kenya, where homosexuality is also illegal, but enforcement of the law has been more sporadic than in Uganda.

“I need to feel safe like other people in other countries,” said Mukhwezi, who managed a restaurant in Kampala before he fled. “Kenya is also not safe for gays. I keep on hiding not to be arrested. I want to go to a country that will respect my rights.” 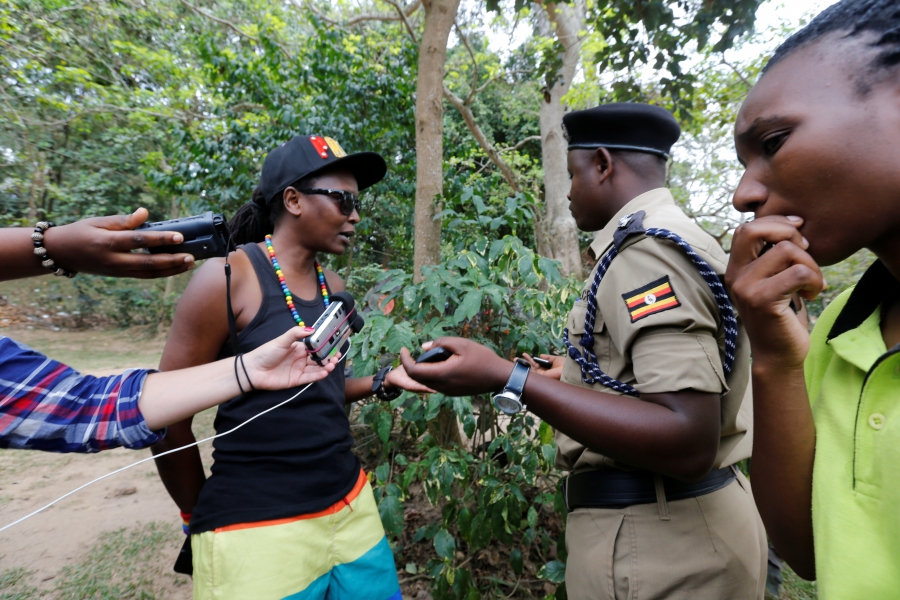 A policeman questions a demonstrator during a gay pride parade in Entebbe, near the capital city of Kampala, before police asked marchers to abandon the gathering, Sept. 24, 2016.

While Uganda has worked to manage the refugee crisis on its border, a smaller one has simmered at home. Last year, the office of the United Nations High Commissioner for Refugees issued a report saying 500 Ugandans had applied for asylum in Kenya based on their sexuality. But LGBT activists say those estimates were too low because most refugees were categorized as having fled or claimed asylum for different reasons.

It’s no secret why gay Ugandans might seek refuge elsewhere. Ugandan police violently break up gay pride rallies and vigilantes regularly harass and attack people, sometimes fatally. In August, Ugandan police shut down Kampala’s gay pride parade, arresting and beating marchers. Authorities claimed the gathering was unlawful. Organizers said they sought but did not receive permission for the event. Other events are slated for August this year.

In 2009, lawmakers approved a law that would impose the death penalty for some homosexual acts. The law prompted international condemnation, and Ugandan courts rejected it as unconstitutional.

Then, in 2014, President Yoweri Museveni signed the Anti-Homosexuality Act, which imposed life sentences on those repeatedly convicted of same-sex sexual acts and banned the so-called “promotion” of homosexuality.

Again, courts invalidated the law. But critics say these government efforts have contributed to worsening conditions for LGBT communities in Uganda. 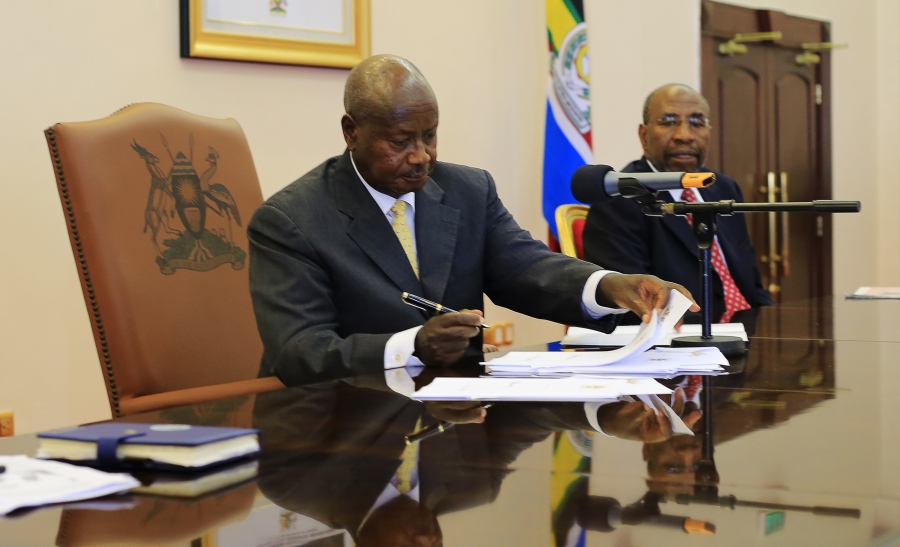 Uganda's President Yoweri Museveni signs an anti-gay bill into law at the state house in Entebbe, southwest of the capital Kampala, Feb. 24, 2014.

A report last year by a Ugandan advocacy group indicated that persecution based on sexual orientation and gender identity increased after the president signed the 2014 law. In a separate report, the Kampala-based advocacy group Sexual Minorities Uganda documented 264 cases of human rights abuses against LGBT Ugandans from May 2014 through 2015.

Forty-eight cases of anti-LGBT persecution involved violence, including “torture by the state.” Eighty-four of those cases involved authorities and others confiscating property, terminating employment and other forms of harm and intimidation. The rest involved harassment.

"LGBT persons face so many challenges in Uganda, from social exclusion — that is, being denied employment, education ... discrimination while accessing services that include health services — to worse: being arrested, disowned by family and friends and verbal and physically violent attacks,” said Frank Mugisha, executive director of Sexual Minorities Uganda.

Mugisha said many Ugandans have left the country to escape police brutality, harassment and discrimination.

“Every human being deserves to stay in a place where they are loved, accepted and respected,” Mugisha said. “But it’s very unfortunate, that for very many LGBT Ugandans, this is not the case. I think we need to support them to find a better home.”

Those Ugandans who have taken refuge in Kenya often live in the poorest neighborhoods like Kibera, a sprawling slum that houses at least 250,000 and as many as 1 million residents, and where accessing basic services is a major struggle. Some have turned to prostitution as a way of finding a livelihood. Others make handicrafts. Mukhwezi works as a cobbler. But living and working in such dense settlements means they struggle to keep their sexual preferences secret.

"I need to feel safe like other people in other countries."

“Life is horrible in a slum when you have no job, and when you are a foreigner,” said Emmanuel Okumu, a gay Ugandan living in Kibera. Okumu has applied for resettlement in a third country, but he won’t say where out of fear of alerting them to his sexual preference. “I’m now making handicrafts to earn a living. I have no friend to ask for help. My parents in Uganda disowned me because of my [sexual preference]. I have no one to listen to me.”

It’s getting worse in Uganda, too, said Okumu — a claim echoed by other gay, lesbian and transgender Ugandans in Kenya and Uganda. In September, officials announced a new government-sanctioned gay conversion therapy program.

“A program to rehabilitate members of the LGBT community, with the ultimate aim of giving them a chance to lead normal lives again, has been developed,” Ethics Minister Simon Lokodo said in a statement.

Lokodo also vowed to continue cracking down on LGBT gatherings.

“I speak up and fight for those that cannot speak and fight for themselves,” said Mugisha. “I want to continue to engage everyone to protect [our communities]. I want to change the mindsets of what people think about the LGBT.”

Mukhwezi, though, has no intention of returning home to Uganda.

“I can’t go back to Uganda,” he said. “It’s very hard to live as an LGBT [person] in Uganda. People face discrimination from family members, authority, community and also religious leaders. You can die anytime.”