Jacqueline, 24, a South Sudanese refugee living in Uganda, receives a blessing from her minister.

There’s no shortage of blame to go around in South Sudan’s worsening civil war. For some refugees who have fled into Uganda, ethnic rivalries stoked by the conflict persist. But other South Sudanese are rejecting those divisions and hoping for peace — together.

With new reports of violence in formerly peaceful regions of South Sudan, and an official declaration of famine that could lead to severe food insecurity for more than 5.5 million by July, it seems the world’s youngest country could be disintegrating into the world’s newest failed state.

The country’s once-bright future descended into chaos beginning in December 2013, as soldiers loyal to President Salva Kiir of the Dinka tribe and rebels aligned with former Vice President Riek Machar, a member of the minority Nuer tribe, fought for control of the young nation and its plentiful oil reserves. Initial massacres by the government-backed Dinka majority were soon matched by revenge attacks committed by rebel fighters supporting Machar, blurring what began as a rivalry between political leaders into a countrywide civil war based loosely on ethnic and political fault lines.

Now, South Sudanese hailing from tribes in Equatoria are facing atrocities, and stories of worsening violence told by refugees now make for a worrying trend.

In November, I traveled to northern Uganda to document the ever-worsening South Sudanese refugee crisis. There, I met dozens of refugees from tribes across Western Equatoria State, one of 10 regions making up South Sudan.

Despite being from different tribes and different areas, they told similar stories. They described mass killings, gang rape and forced displacement — often at the hands of government-backed Dinka soldiers but occasionally by rebel militias or even plainclothes fighters.

Driven out of their homes and displaced in foreign land, many of the refugees are struggling to reconcile with the complexity of war and dislocation. For some, that means blaming opposing tribes for the conflict. Still others refuse to cast blame on rival ethnic groups, believing that peace beyond those divisions remains possible in South Sudan.

Here are some of their stories.

Vendors at a market in Arua, Uganda, relax under a plastic tarp emblazoned with the United Nations High Commissioner for Refugees logo.

Uganda has taken in more than 500,000 South Sudanese refugees in just seven months. Many of them resettled in northern Uganda.

Refugees from many different tribes, including the Dinka and Nuer, live in Arua.

Refugees from South Sudan’s Western Equatoria region gather for the monthly Prayers for the Healing of South Sudan service in northern Uganda.

Through prayer sermons, music and healing ceremonies, refugees at the monthly Prayers for the Healing of South Sudan (PUSH) service ask God to forgive their nation’s sins and allow them to return to their homes in South Sudan.

Most members of the Pentecostal congregation are from South Sudan’s Western Equatoria State, which borders the Democratic Republic of the Congo. Many are neither Dinka nor Nuer.

The PUSH services usually draw hundreds of refugee worshippers from tribes across South Sudan’s Western Equatoria State, but lately the turnout has been much smaller.

“Some people stopped coming to the church because the fighting in South Sudan continued,” the pastor said. “People are fed up.”

Chandra, a minister, leads the congregation in prayer.

Preaching to a crowd of South Sudanese refugees, Chandra, a minister at the PUSH service, urges members of the congregation to repent for their sins.

“Money and riches have taken us far away from our Lord,” she cried out. “We have broken our relationship with our God. There’s no peace now. What we sowed is what we are reaping now.”

Many in the congregation believe the ongoing conflict is God’s punishment for “disobeying” and “forgetting” him during more prosperous times, adding that they feel compelled to “keep praying until something happens.”

Jacqueline, 24, poses for a photo outside her home in Arua, Uganda.

An expectant mother from the Western Equatoria, Jacqueline, 24, was attending a university in northern Uganda when rebels attacked a compound in Juba, the nation’s capital. Her stepfather and brother were inside.

Jacqueline receives a blessing from her minister after finding a two-headed snake on her doorstep earlier that week.

“I had a terrible dream about my family in South Sudan,” Jacqueline said. “When I woke up from the sleep in the morning, I saw a snake at the doorstep. In our culture, snakes symbolize bad things.”

Jacqueline asked her minister for a blessing to ward off future bad omens. “I left everything in the hands of God,” she said. “So, there’s nothing that is going to happen.”

She prays to God every morning and evening for peace and healing in South Sudan.

“I also pray for my younger brother who was killed. I pray for my family, my husband and my future,” she said.

Jacqueline said she knows many South Sudanese who believe a Bible verse — Isaiah 18:2 —predicted the Dinka would bring violence to the region.

She isn’t so sure.

“If you look at the description of those people, most people say it refers to Dinka … but I don’t know if they’re the ones,” she said.

Jacqueline is hopeful that ethnic tensions will end so she can return to her family and friends in South Sudan.

“I have that hope for sure,” she said. “Even this segregation is just recent — this tribalism just started but we used to be together.”

Sisters Cecilia and Norah share a couch in Arua, Uganda.

Sisters Norah and Cecilia fled to northern Uganda during the second Sudanese civil war, which led to the creation of South Sudan. They moved from Yei River State to the Rhino Camp Refugee Settlement in Uganda before finding a home in Arua in 1990.

Cecilia said she lost many family members in the ongoing conflict in South Sudan, including her nephew who was killed last year by government soldiers.

“They knocked at the door, and he was shot point-blank,” she said. “His name was Lupai.”

Cecilia blames the Dinka for bringing conflict to her country. 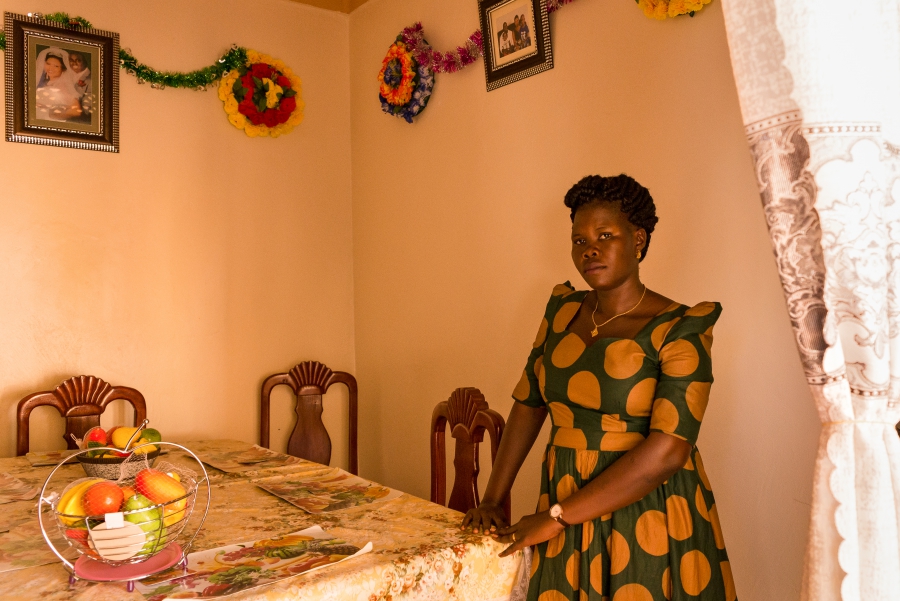 Lika, 29, stands at a dining room table in her home in northern Uganda.

“War is happening. That is why we are here. It’s like in a prison, waiting to be released,” said Lika, 29, who fled the fighting in Juba in 2012, leaving her parents and siblings in South Sudan.

“They are seriously suffering because no one is helping them,” she said.

Unable to find a job in Uganda, Lika now stays at home to care for her three children. She often struggles to afford food for her family.

“I’m here, just sitting … like a housewife because there is no work,” she said. “Our problem is the money because we are dependent here.”

Lika doesn’t blame one tribe for the current conflict in South Sudan. Rather, it’s punishment for the sins of all South Sudanese people, who she said left their faith during times of peace.

“God will be the one to stop that war when the time has come, so we are just praying to God to have mercy,” she said. 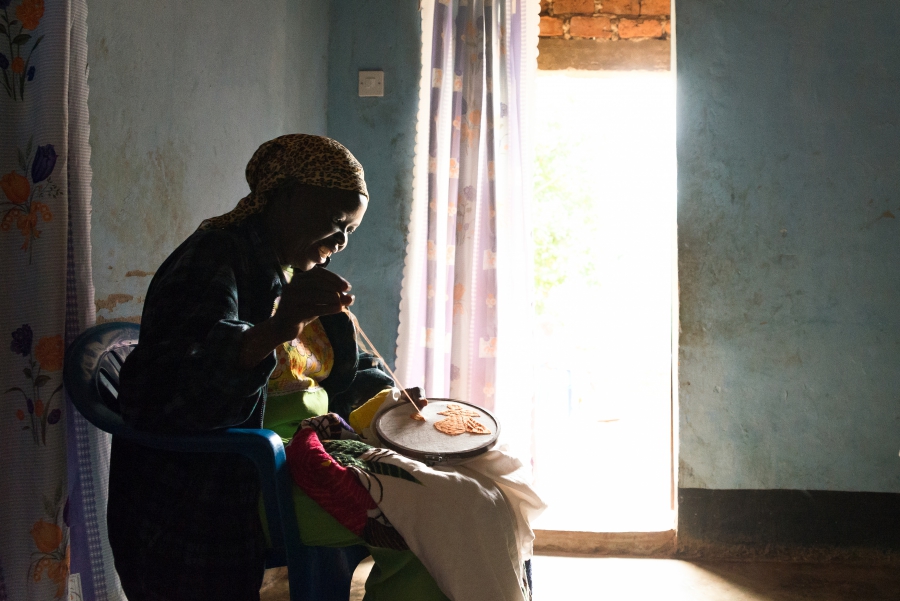 Mary embroiders a handkerchief while sharing her story of fleeing South Sudan 10 years ago.

Mary, 33, said she relies on her Christian faith to get her through the pain of war and displacement.

The granddaughter of a Protestant bishop, she prays every morning that God keeps her children healthy and brings peace to South Sudan.

“Sometimes God cannot deliver to you right away,” Mary explained. “You just pray until you get what you want.”

Mary doesn’t blame one tribe for the violence that has engulfed her country in recent years.

“We have differences but [the] same heart,” she said. 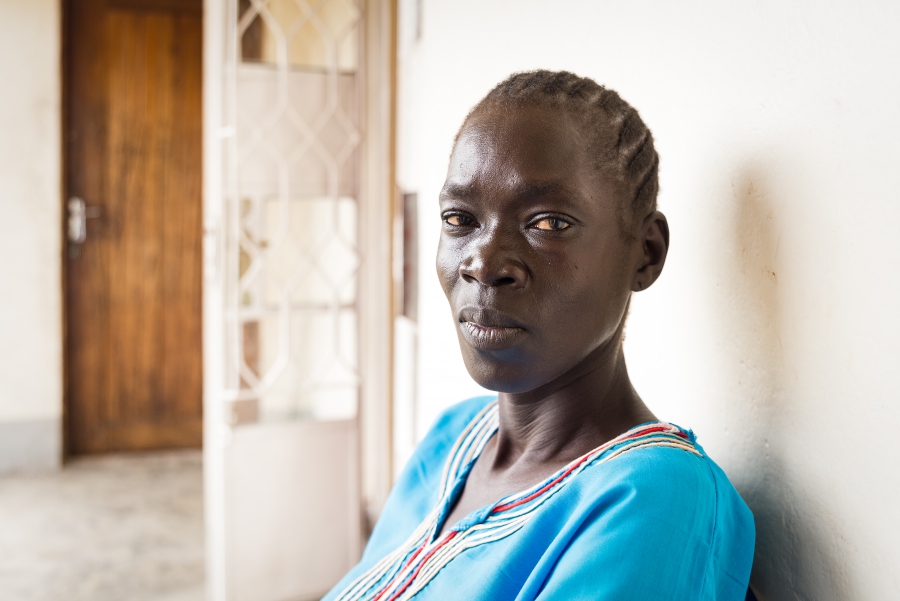 “When the country is not yours, you’re not happy in it,” said Wilma, a 37-year-old refugee living in Arua.

Wilma fled to Uganda three years ago, moving to Arua and caring for her children and her sister’s after fighting broke out in the country.

“What’s happening is the tribes are not together,” she explained. “Everyone wants to be on the top.” 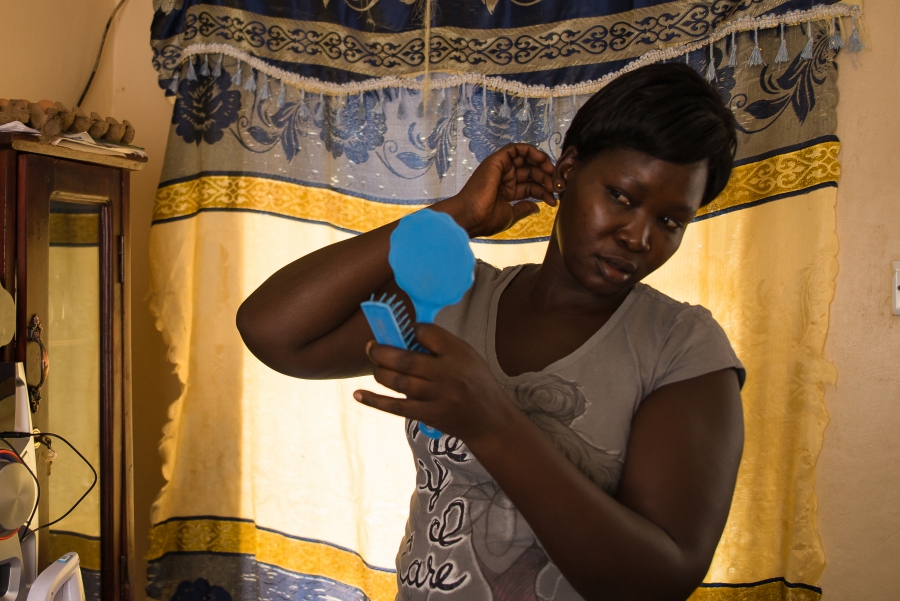 Alice prepares for the day inside her home in Arua, Uganda.

“Sometimes I think, why is life too difficult like that?” said Alice, a refugee from Western Equatoria.

Still, she is determined to give her children better lives than she had in South Sudan.

“Some of this suffering will end with me and their children’s [burden] will be lighter because of their suffering,” she said.

Alice said she believes something positive will come out of her pain, adding, “When you’re a human being, as long as you have blood flowing from your veins, you cannot give up. Just believe.”

Refugee sources in this story are identified by their first names only, due to security concerns.

Images from this article are part of the ongoing project “Enduring Exile: Stories of South Sudanese Displacement.” More images and stories about the South Sudanese refugee crisis can be found at www.enduringexile.com.