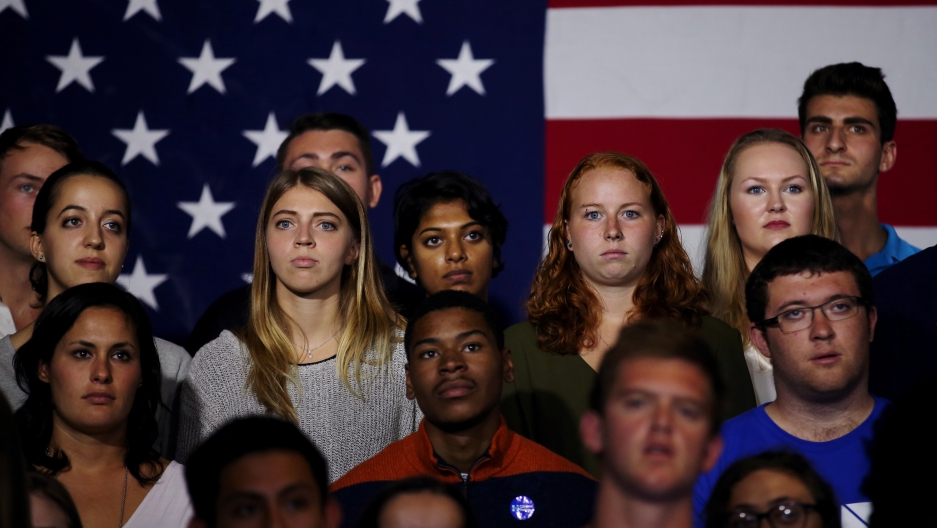 Colleges and universities report an increase in foreign-born students expressing concerns about studying in the US.

Students from the Middle East, Asia and Latin America are growing more fearful of attending college in the US.

That’s according to a recent survey by the American Association of College Registrar and Admissions Officers. Higher education institutions have reported a decline in international student applications and, experts say, the current political climate is a factor.

“There was a larger trend of students and their families reacting to the political rhetoric that was occurring around the election and post election and what is being shown in the media,” says Melanie Gottlieb, deputy director of the association and the survey’s lead researcher. “Those were manifesting as concerns about whether pursuing academic study in the US should still be an option.”

The survey, polled more than 250 colleges and universities nationwide on their current application numbers, indicates that 38 percent of the undergraduate institutions surveyed saw a drop in their number of international applications (PDF). Thirty-one percent of graduate schools reported a decrease in applications from abroad.

At the same time, 35 percent of the schools surveyed reported an increase in applications and 27 percent reported no change at all.

Gottlieb says the survey was in direct response to “increasing concern from international educators that the political climate could be damaging to international student recruitment efforts” and is meant to be “snapshot of student and family perceptions” in the year leading up to the presidential election through February.

Prior studies have shown that international students have been coming to the US in steadily increasing numbers for 10 years.

Gottlieb says that part of the change in the number of international applications this year is related to the 2016 presidential election cycle, President Donald Trump’s campaign rhetoric and the administration’s immigration initiatives in its early months. His executive order that restricts travel from certain countries has been halted by court injunctions, as a case about its legality proceeds. The Trump presented its arguments on the policy to an appeals court on Monday.

Still, universities have seen the effect of these kinds of policies on potential students abroad. “Institutions have had to adjust to the perception of negative attitudes toward the political rhetoric,” Gottlieb says. “The areas of concern aligned pretty clearly with current political issues like travel bans, immigration and work visas.”

Schools surveyed reported that students often cited safety, feeling welcome and post-graduation job prospects as influencing their application and enrollment decisions. Anxieties varied by region, with the most concern reported by students in the Middle East, India and Latin America.

According to the survey, applicants from India and China, who account for nearly half of all international students, say the “perception of a rise in student visa denials at US embassies and consulates” is source of worry among applicants and their families.

Students from the Middle East reported the highest increase in anxiety about enrolling in US universities. Surveyors attribute this to both political changes and an increase in threats against Muslims.

According to the Institute of International Education, a nonpartisan, nonprofit organization that focuses on international exchange, the nearly 1 million international students attending US colleges and universities contribute $36 billion annually to the US economy. They also provide an important source of tuition revenue for many universities.

American University in Washington, DC, is one school that saw no measurable change in applications from abroad. Evelyn Levinson, the university's international admissions director, credits adjustments to the university’s recruitment tactics such as more trips, listening sessions and webinars addressing student concerns.

Data on the number of international students who eventually enrolled won’t be available until next year.

“By the time of presidential elections in November, most students have already applied for colleges, or made up their minds about whether to apply,” she says. “The true impact will likely be in what we see for applications for fall 2018 and beyond.”

International student enrollment numbers tend to shift based on foreign policy and current events, such as the terror attacks of September 2001 and the Iranian hostage crisis of 1981. “The climate can definitely be a deterrent,” Levinson says.

The survey is not quite a wakeup call, but she says it should push institutions to think differently about how to recruit foreign students.

“We just have to be ready. Know who you are and make sure the message sent is one of welcome and inclusion at all times.”

She adds that more foreign-born students may look to Canada and England as alternatives. Canada has already seen a surge in admitted international students.

An earlier version of this story misstated the results of the survey. The survey reported that 40 percent of undergraduate schools reported a drop, rather than 40 percent fewer applicants.