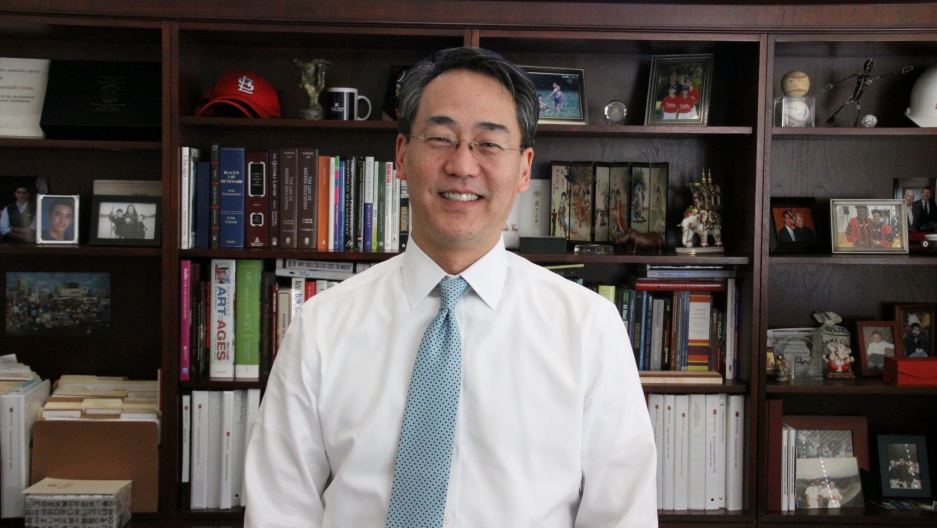 On the campaign trail and now in the White House, President Donald Trump has talked tough on trade, specifically when it comes to China. His heated rhetoric has resonated with his base in the Rust Belt, but it's left American colleges and universities on the coasts anxious that Trump could undermine their well-oiled business model.

Walk up and down Commonwealth Avenue on the Boston University campus, and it's easy to see and hear the presence of international students.

The largest percentage of foreign students — here and nationwide — come from China. So when President Trump sounds off, college administrators get anxious.

“Anyone at a university, if they said they weren’t concerned, then they’re living on the wrong planet,” said Willis Wang, associate provost of Global Programs at BU.

BU enrolls about 9,000 international students — nearly 4,000 of them from mainland China. That's an 800 percent increase over the past 10 years, and that’s in part, why, Wang says, Trump’s rhetoric is causing so much angst on campus.

From day to day, tweet to tweet, trade experts say it's nearly impossible to know where President Trump stands.

"While it may not be a trade war, per se, I think trade is likely to become a far more contentious issue,” said Elizabeth Economy, director for Asia Studies at the Council on Foreign Relations.

Economy says one week Trump is promising to slap a 45 percent tariff on Chinese imports; the next he makes nice, assuring the Chinese president that America backs the “one-China” policy recognizing Beijing’s sovereignty over Taiwan.

Ultimately, she expects the administration to tighten the screws on China.

“If a real trade war did erupt, and things became very, very contentious, Chinese students could become a target of the Chinese government,” Economy explained.

And that would cost US universities like BU billions in lost tuition revenue. Foreign students generally pay full price, subsidizing the cost for domestic students. Chinese students alone contribute $11 billion to the US economy each year.

“There’s no question that higher education is one of the most important US exports to China,” said Brad Setser, a former Treasury official under the Obama administration.

In a trade skirmish, Setser predicts, Trump himself might shut off the spigot of Chinese students flowing to the US.

“The Trump administration could conclude that the US is educating too many Chinese students and that is serving to the benefit of China rather than the United States,” Setser said.

While economists say Trump’s trade rhetoric could convince foreign students to seek degrees in other English-speaking countries like Canada and Australia, BU’s Willis Wang is hopeful American colleges will remain the most sought-after destination.

"Our plan is to do what we were doing even before the specter of Trump appeared," Wang said. "We’re spending a lot of time trying to bring our two communities together, meaning the domestic and the international."

For now, international applications at BU are steady, but administrators here aren't being complacent: They're stepping up their recruitment and retention efforts in Beijing.