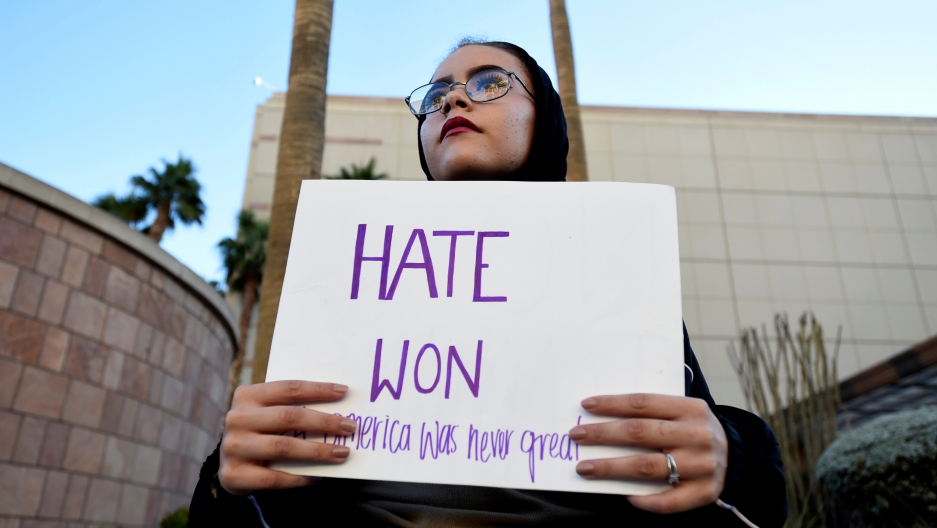 Krystina Robinson of Las Vegas carries a placard in protest against the election of Donald Trump, near the Trump Hotel and Tower in Las Vegas.

The Southern Poverty Law Center has recorded more than 400 incidents of harassment and hate in the first six days since Donald Trump won the US presidential election.

The civil rights group, based in Montgomery, Alabama, has set up a forum on its website for people to report incidents. It’s also been collating media reports from across the country.

The SPLC can’t verify them all independently, but it does seek out police confirmation. It has weeded out some false claims, including one from a woman who falsely claimed that her hijab was forcibly removed.

“But still,” says Mark Potok, a senior fellow with the SPLC, “I think it’s indisputable that we’re seeing a big rash of hate crimes and hate incidents — kind of lesser crimes — that are directly related to the election of Donald Trump.”

“We’ve heard of lots and lots of reports of Muslim kids being bullied,” says Potok. “We have heard reports of black people being attacked, of being screamed at, told to go — quote — 'go back to Africa,' that kind of thing. Similar things said to other foreigners.”

“We don’t know exactly how this compares to prior periods,” he adds. “But I can say on an anecdotal basis, we haven’t seen anything like this since the morning after Barack Obama was first elected, as our first black president. Back then we saw a similar rash of angry incidents and hate crimes across the country.”

President-elect Trump — apparently surprised by these incidents, although his campaign should be used to charges of racism by now — has called on people to stop. He has said he wants to "bind the wounds of division." But Potok is skeptical.

“[It’s] a day late and a dollar short,” says Potok. “The man has spent the better part of a year and a half doing precisely the opposite.”

“You know it’s all very nice that Donald Trump has become a no-hate guy, opposed to violence,” he adds, “but it seems awfully late in the game.”

The SPLC has also received a huge surge in calls from people wanting to support the organization or volunteer to help. “It’s all hands on deck here. We’re getting an enormous number of phone calls, and other contacts. There are really huge numbers of people who want to do something.”

Potok expects "this rash of hate crimes to diminish in the next couple of weeks. We certainly don’t know that for sure. But a comparison it seems to me is with what happened in the UK immediately after the Brexit vote to leave the European Union.” After the Brexit referendum, the UK experienced a spate of hate crimes and other incidents against immigrants and minorities for a couple of weeks.

“If this trend doesn’t stop, we are really in deep trouble.”