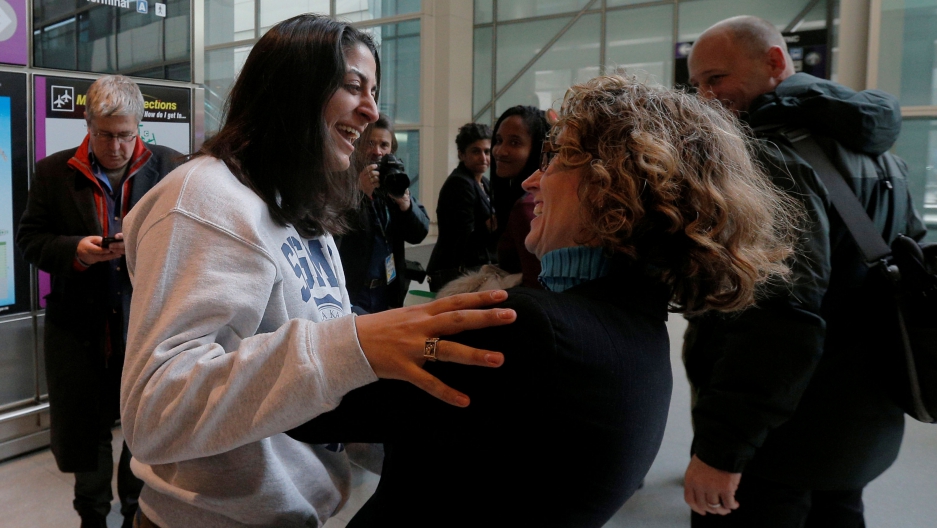 Niki Rahmati, a student at the Massachusetts Institute of Technology (MIT) from Iran, is greeted by immigration attorney Susan Church (R) at Logan Airport in Boston, MA.

President Donald Trump's executive order restricting travel and immigration to the US by people from seven Muslim-majority nations: Iran, Iraq, Libya, Somalia, Sudan, Syria and Yemen has put on hold the lives of thousands of nonimmigrant visa holders.

Upwards of 100,000 visas are issued each year to citizens from the seven Muslim-majority countries — students, workers and immigrants.

Some 72,162 nonimmigrant visas were issued to citizens of a now-banned nationality in 2015. After temporary visas, the most were given to students seeking higher education.

The number of students from the affected countries enrolled in a US college or university has steadily increased over the past five years.

In the 2015-2016 school year, 17,354 international students in the US originated from one of the seven countries on the banned list, according to a survey from the Institute of International Education.

Most students arrived from Iran, which has the highest number of students seeking an education in science and engineering in the US. On the whole, international students disproportionality pursue degrees in STEM and business fields.

Trump’s executive order has caused distress not only for current international students, but for future ones as well.

Zahra Rabinia, an Iranian scientist who applied to Ph.D. programs in the US, was shocked to learn about Trump’s executive order.

Rabinia says she has been spending time and money for years to prepare to study in the US.

“These universities are a dream of many students in my country,” she says. “It was difficult [before] for Iranian applicants, but at this moment, it is not only difficult, it is closed.”

Even for students who have arrived in the US, the future is now uncertain. Rabinia's brother, who is a student at Texas Tech University, has a dream to work at NASA.

But now, he is unsure that it will ever be achieved.