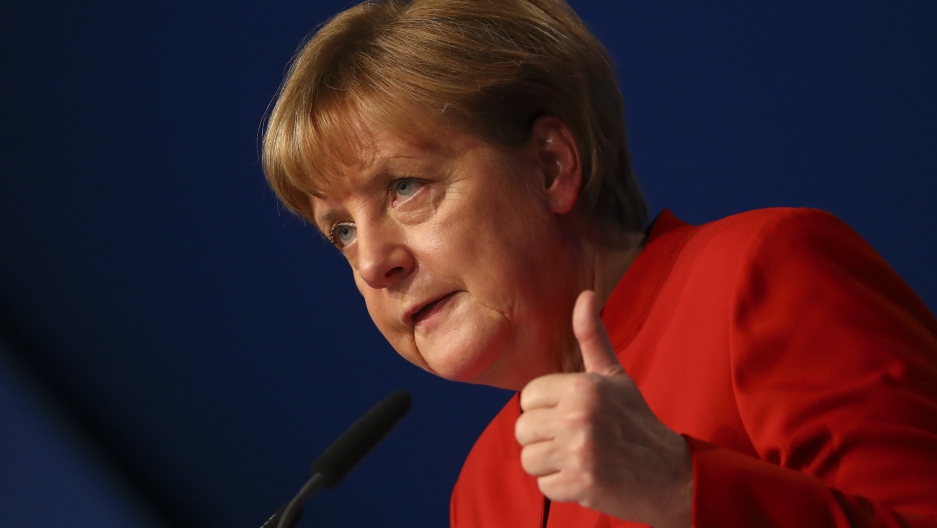 Chancellor Angela Merkel Tuesday lashed populists seeking to exploit Germany's refugee influx, but as she launched into election campaign mode, Merkel set down a tough line on integration — including a ban on the veil worn by many Muslim women.

Outlining a strategy to counter populism that has consumed key allies abroad, Merkel vowed there would be no repeat of last year's record refugee arrivals.

She also stressed it was legitimate for Germany to expect newcomers to integrate, and this included a rejection of the niqab full-face veil.

"The full veil must be banned wherever it is legally possible," she told the annual gathering of her centre-right Christian Democratic Union (CDU).

Next year's polls will "not be a walk in the park" as Germany is deeply polarised, Merkel warned, but urged the population to remain "sceptical about simple answers."

"Rarely is it the simple answers that bring progress to our country," she said, in a clear reference to the upstart anti-Islam and populist AfD, which Merkel had previously criticised as offering no solutions to problems.

'We are the people'

Merkel, who has led Germany for 11 years, last month confirmed she would run for a fourth term but acknowledged that the election would be "more difficult" than any other she has contested.

There have also been questions about whether the 62-year-old has fresh ideas to offer in a world upended by Brexit, the surprise election of Donald Trump and the departure of Italian Prime Minister Matteo Renzi following a crushing referendum defeat championed by populists.

The CDU has suffered setbacks in five consecutive state polls as voters punished Merkel for her liberal refugee policy, with more than a million people seeking asylum in Germany since 2015.

Tackling the hot button issue head-on, Merkel vowed that "a situation like that of summer 2015 can and must not repeat itself."

She also stressed that each asylum request would be examined carefully, and "not all can and will stay" in Germany. Humanitarian groups have praised Germany's intake of refugees.

Merkel's CDU and its Bavarian sister party CSU secured a decisive win of 41.5 percent at the last election in 2013 — its best result since national reunification in 1990, on the back of strong approval for her tough stance on austerity for debt-stricken EU nations.

Three years on, there are rumblings of discontent — even within her own party — following her September 2015 decision to admit refugees fleeing war in mostly-Muslim nations, a move that deeply polarised Europe's biggest economy.

Reflecting the mood, party faithful re-elected on Tuesday Merkel as chief for the next two years, but gave her just 89.5 percent — her second worst score, and the worst since she became chancellor in 2005. Her lowest was in 2004, when she was approved by 88.4 percent.

National media had suggested that a score below 90 percent would be a slap in the face.

Party members are particularly anxious to halt a haemorrhage of support to the AfD, which has gained a firm footing as a protest platform for disgruntled voters.

The upstart party now enjoys around 12 percent support, according to opinion polls. At the last general election it fell short of the five-percent threshold to ensure representation.

Hitting out directly at the populists as well as the xenophobic PEGIDA movement, Merkel wrestled their "we are the people" rallying cry back, declaring to sustained applause: "We all get to determine who 'the people' are — not just a few, no matter how loud they are."

Beyond domestic issues, Merkel also devoted a large part of her address to crises abroad as she noted that in 2016, "the world has not become stronger and more stable, but weaker and more unstable".

She deplored the failure of the international community to alleviate the suffering in Syria's besieged city of Aleppo, calling it a "disgrace."

Merkel said she was shocked to see tens of thousands of Germans hitting the streets to demonstrate against free trade deals but virtually no protests against the bloodletting in Syria.

"There is something wrong there," she said.

She also underlined the importance of holding the European Union together, saying Germany will do well "only when Europe does well too."

In the face of the mountain of challenges, Merkel urged her delegates: "You must, you must, help me."