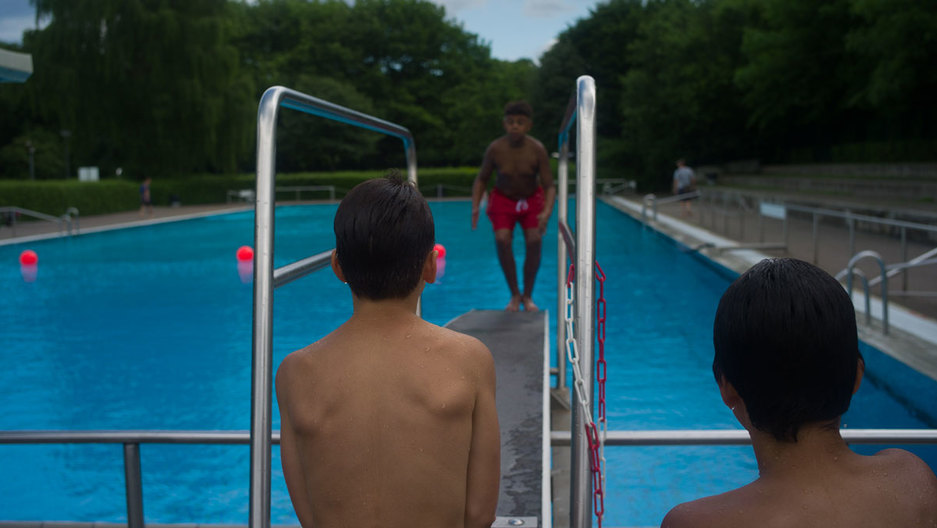 A young swimmer gets ready to leap off of a diving board at Sommerbad Neukolln, a public pool facility in Berlin. It's located in one of Germany’s most ethnically diverse neighborhoods.

German swimming pools are a metaphor for Germany — and for the challenge of integrating newcomers.

Germany is one big swimming pool, trying to integrate the more than a million Middle Eastern refugees and asylum seekers who have arrived in the last couple of years. The most important thing, says social worker Hartmuth Kurzhals, is to make newcomers understand that in Germany, there are rules — and no exceptions.

One of Berlin’s largest pools, on Columbiadamm Street, is near two refugee housing centers, which means new arrivals from places like Syria, Iraq and Afghanistan — and longtime Berlin residents — all swim there together.

Before the start of swimming season this summer, social workers like Kurzhals were bracing for culture shock at the pool.

“[The refugees] don’t know how to behave,” says Kurzhals. “Most of them know. But some of them don’t.”

Kurzhals helps run “Bleib Cool am Pool” (Staying Cool at the Pool), a team of conflict mediators from immigrant backgrounds, who patrol the pool. This summer, the group helped refugees learn about German pool culture. 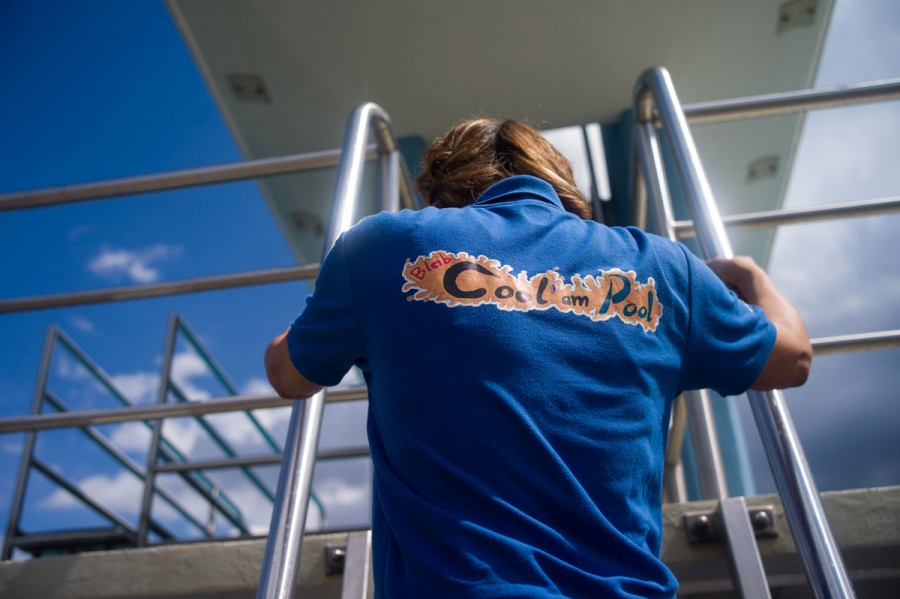 Social worker Nurcan Civelek climbs up to the diving platform at Sommerbad Neukolln in her work uniform. She says she enjoys her work, especially working with young people.

The instructions come in a most German way: friendly cartoons, posted on pool walls and handed out at refugee centers. Some of the rules:

Germans have been concerned about sexual assault by asylum seekers since a notorious incident on New Years Eve in the city of Cologne, when hundreds of cases of harassment were reported.

At least two men have since been convicted. One German town banned adult male migrants from its public swimming pool this winter.

One Syrian refugee at the Columbiadamm Street pool, Jaber Zahraldeen, says Syrians and Germans must learn to respect each other’s body culture.

A 22-year-old woman in a bikini laying next to the pool, who gave her name as Laticia, says she doesn’t mind seeing burkinis, the full-body swimwear devout Muslim women wear for modesty. This is in contrast with France's controversial treatment of burkinis.

“It’s like the culture of their country, so I respect that,” Laticia says. “I don’t judge people.” 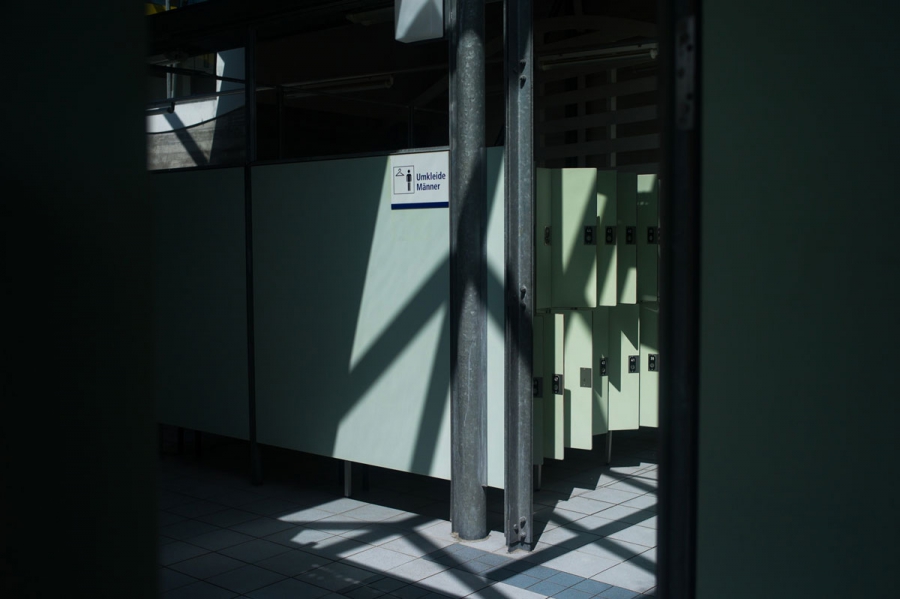 The men’s changing room lit by morning sunlight at the Sommerbad Neukolln. Last season, the biggest challenge for the project “Bleibt Cool am Pool” started here. Many recently-arrived male refugees began arriving to swim wearing only cotton underwear, something other pool guests see as unhygienic. Some Muslim women also waded or swam in the pools wearing full body garments, which were often made of heavy materials that guests and attendants found to be improper for use in the pool.

“Just to explain the rules could sometimes be very difficult,” says Arne Freudenberg, another social worker with Staying Cool at the Pool. “Just to say, ‘At first if you want to go inside a pool, you have to clean yourself.’ They just said, ‘What do you want from me?’ They didn’t understand that at first they have to have a shower.”

Granted, even some of us in countries where public pools require swimmers shower first don't always follow that rule. But aside from washing one's body, Germans are concerned with the cleanliness of clothes that enter the water.

Nurcan Civelek, a mediator of Turkish background with the group, says it’s a problem when Muslim mothers wear long clothing at the pool.

“You’ll have women who will come and hold their kids at the edge of the pool, and their cloth dips into the water,” Civelek says. “You can only imagine how unhygienic that is.”

Unlike in France, burkinis are encouraged for Muslim women in Germany, since they’re made out of swimsuit material, and therefore considered hygienic. But German standards still don't allow for cloth to drag on the floor and then touch the pool water. 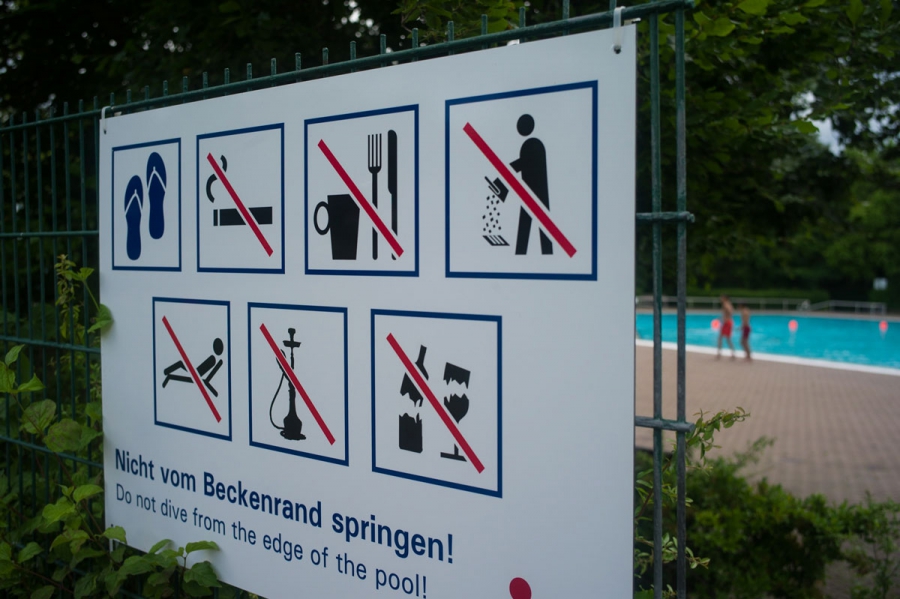 A sign just beyond the edge of the wading pool at the Sommerbad Neukolln advises guests to wear sandals and that the smoking of hookahs is prohibited. It is common in Middle Eastern cultures to smoke hookah while relaxing in the warm weather, but due to the danger of burns and broken glass, the Berlin pool authorities doesn’t allow hookahs in pool facilities.

Many refugees don’t know how to swim, says Civelek, who recently saved a 14-year-old Afghani refugee from drowning.

Syrian refugee Jaber Zahraldeen says he thinks German efforts to enforce swimming etiquette is a very good idea. He’s seen a lot of dangerous jumping at lakes and pools, including by fellow Syrians, he says.

“The Syrians don’t keep the rules,” Zahraldeen says. “They just want to jump anywhere. And this attitude plays a part in the statistics.”

In the last few years, there have been reported cases of refugees drowning in Germany. 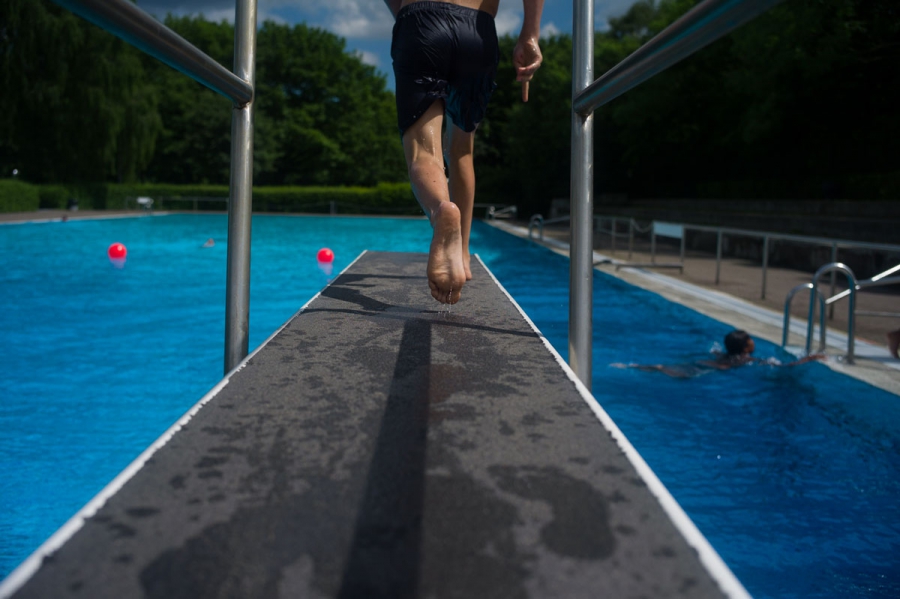 A young swimmer takes a running leap off of a diving board at Sommerbad Neukolln.

Again: In Germany, there are rules — and no exceptions.

Despite pool mediators' concerns about culture clashes at the pools, Freudenberg says the season has been quiet. The main things people at the pool have complained about, he says, are lost property and insect bites.

And only a handful of poolside sexual harassment incidents were reported this summer. Still, this Berlin pool and others employ tough-looking security guards in black uniforms. 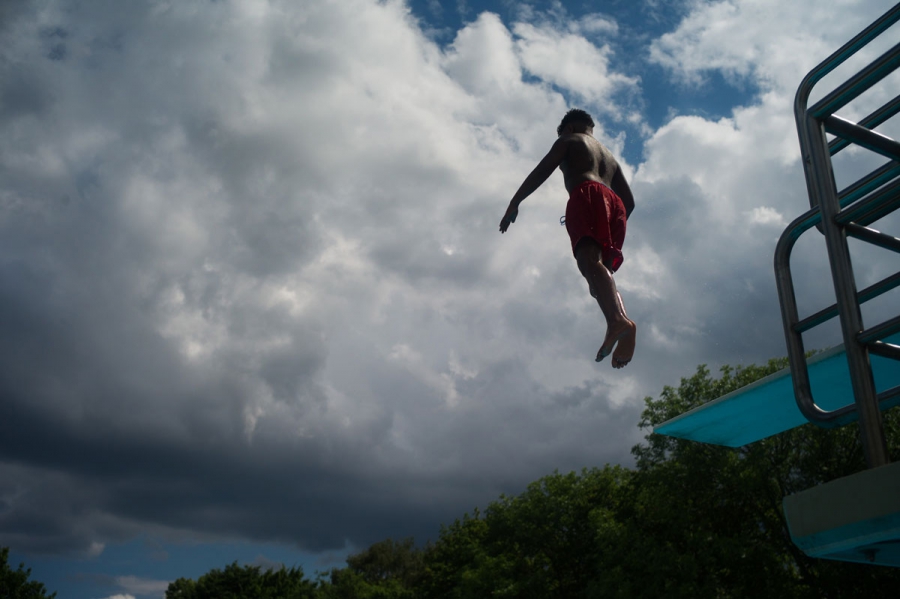 A young pool guest jumps from the diving platform of the Sommerbad Neukolln as storm clouds roll in. The director of the pool says that despite the forecasts, they are expecting a peaceful summer at the facility.