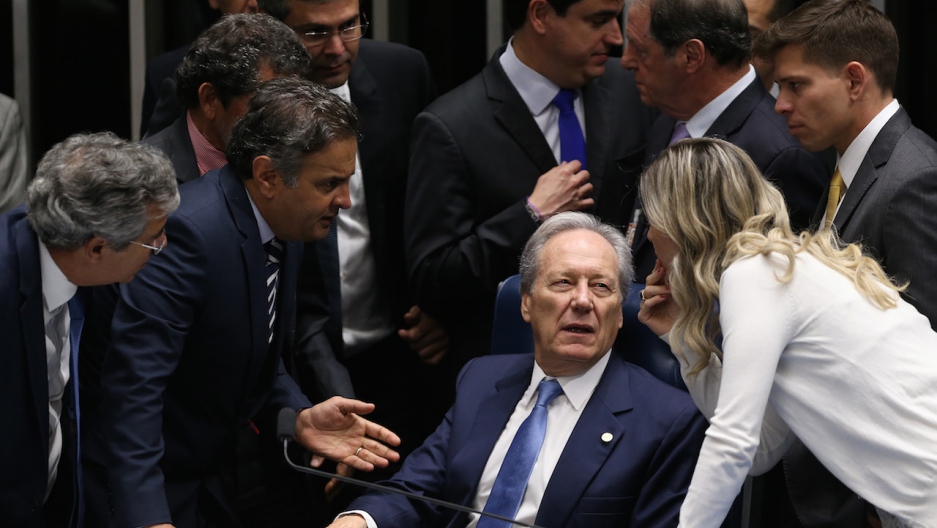 The president of Brazil's Supreme Court, Ricardo Lewandowski (seated), speaks with senators before the Senate votes on whether suspended President Dilma Rousseff should stand trial for impeachment, in Brasilia, August 9, 2016.

While the world focuses on sensational victories at the Rio Games, a different spectacle is playing out in Brazil's capital.

Early Wednesday morning the country’s Senate in Brasilia voted 59 to 21 to put Dilma Rousseff, Brazil's suspended president, on trial for accusations she manipulated government accounts. It's the latest in the impeachment process against Rousseff that has been unfolding since December. A final Senate vote is expected toward the end of August.

The odds aren’t looking good for Dilma, as she is known in Brazil. The final decision needs a two-thirds vote of the senators present. If all 81 senators show up, the magic number is 54. So at least six of the senators who voted for impeachment Wednesday morning would have to either not show up or change their vote in order for Dilma to avoid impeachment.

If she doesn’t survive the vote, acting President Michel Temer will see out her term, ending in late 2018. That's assuming Temer — the former vice president who took over from Rousseff in May — makes it that long. He's also very unpopular and has been accused of wrongdoing.

Temer's short speech at the Olympic Opening Ceremony was drowned out by boos. Then, Temer’s name was splashed across TV screens and social media after police officers were filmed forcibly removing protesters carrying signs reading “Fora Temer” (“Temer Out”) from Olympic venues.

The videos of the removals went viral across Brazil, arguably giving the protesters and their signs far more publicity than they would have otherwise gotten. By Tuesday night, a judge in Rio had ruled that the evictions were unlawful.

The Olympic Games may be exceptional, but it’s been a pretty standard couple of weeks of political turmoil in South America's biggest country. There will surely be more to come.