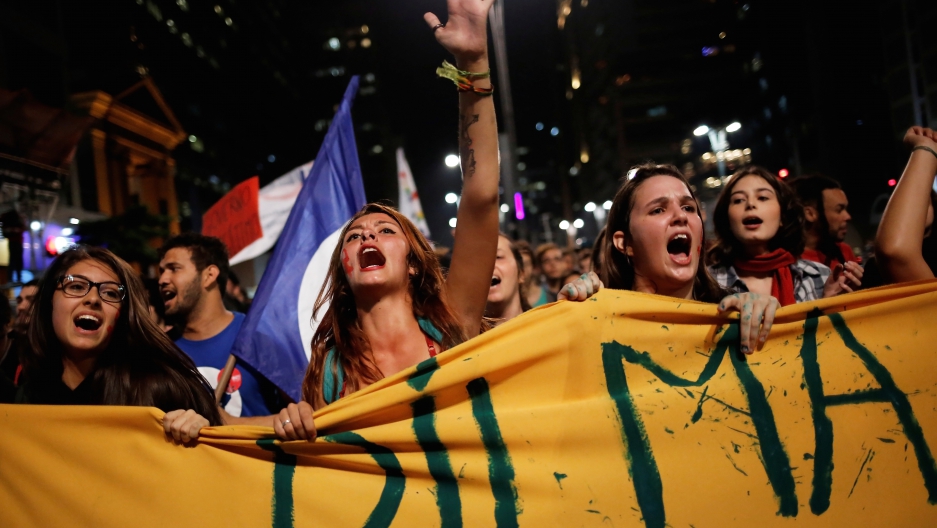 Women shout slogans during a protest against Brazil's interim President Michel Temer and in support of suspended President Dilma Rousseff on Paulista Avenue in Sao Paulo, Brazil, on May 17.
Credit:

Editor's note: This story has been updated with news that a second Brazilian cabinet member, Fabiano Silveira, the anti-corruption minister, resigned after leaked conversations suggested he may not have been so anti-corruption after all.

Firstly, let’s get one thing clear: Brazil's president, Dilma Rousseff, has not yet been impeached.

That may sound a little strange, considering the country is currently being led by somebody else, onetime Vice President Michel Temer, and his new cabinet. But the detail is important. Rousseff has currently stepped down temporarily, and will shortly go on trial for alleged financial crimes.

It’s after that trial — possibly before the Olympics in August — when Brazil’s Senate votes on whether to impeach her. The vote is largely regarded as a referendum on Rousseff herself, rather than a verdict on whether she broke the law.

And that’s where things get interesting. A couple of weeks ago, many political scientists had all but written Rousseff off. But a lot can change in two weeks in Brazil. Temer is deeply unpopular (only 2 percent of respondents said they would vote for him in a recent poll), and has had a wildly inauspicious start to his tenure. He’s been fighting crises, and has already seen two of his cabinet ministers step down after embarrassing, possibly incriminating recordings of phone calls and meetings were leaked to the press.

Does all this mean Rousseff, who has vowed to fight until the bitter end, could actually come back?

Maybe — but it's unlikely, say the analysts who watch Brazilian politics closely.

Riordan Roett, head of Latin American studies at Johns Hopkins University, thinks there's a "60-40" chance the Senate will impeach Rousseff. "Three or four weeks ago, I would have said 70-30," he said. "And we're moving towards a 50-50 scenario."

In order to finally impeach Rousseff, two-thirds of senators will have to vote for impeachment. That’s a very high barrier.

Perhaps the best indication of how that vote will go happened on May 12, when the Senate voted to put Rousseff on trial. Here’s where the numbers become important. That last vote only required 50 percent of senators’ approval. Of the 81 legislators, 55 voted in favor of impeachment, 22 against, and four were absent.

So, the vote easily got the simple majority it needed. But two-thirds of 81 is 54. That means the pro-impeachment camp only got one more vote than the two-thirds needed to oust the president. In other words, Rousseff only has to turn a couple of senators her way during her trial, and she could survive that final impeachment vote.

But Marcos Troyjo, director of the BRICLab at Columbia University, thinks even converting just two senators is beyond Rousseff’s reach at this point. He said she is deeply unpopular in the hallways of power in Brasilia and has used up most of her political capital by now, despite leading the country for more than five years.

And even if Temer’s interim government continues down its disastrous track, Troyjo thinks a more likely scenario than a return of Rousseff is that Brazil’s courts call new elections.

“Even more than favoring impeachment or favoring Temer becoming president, I believe the great majority of the Brazilian population want to see Dilma go,” Troyjo said. “Whether the method to achieve such an end is the impeachment or having the 2014 elections annulled.”

The administration faces other investigations separate from the impeachment charges. Rousseff and Temer are accused in a case before the Supreme Electoral Court of receiving kickbacks to fund their 2014 election campaign.

On Tuesday, there were media reports that disgraced business magnate Marcelo Odebrecht has cut a plea deal with prosecutors in a far-reaching graft case. That deal could have implications for both Rousseff and Temer, said Mauricio Santoro, a political scientist in Rio.

“We’re talking about a guy who financed every major politician in Brazil,” Santoro said. “If he goes public and says there was money from corruption in the re-election campaign of Dilma and Temer in 2014, this isn’t even a case for impeachment, this is a case for revocation of their ticket."

Troyjo said it’s possible the electoral court could decide on this case before Dec. 31, which would force new elections if the president and vice president are found guilty.

Despite the pending case, however, Santoro said people shouldn’t give up on Brazil’s elected president just yet.

Though her popularity sank to record lows in recent years, he believes she still maintains some political power. And Rousseff may just be able to capitalize on events that play into her message that she was ousted by an unconstitutional coup.

“We can’t rule out anything in Brazil,” Santoro said. “It’s not game over for Dilma yet.”