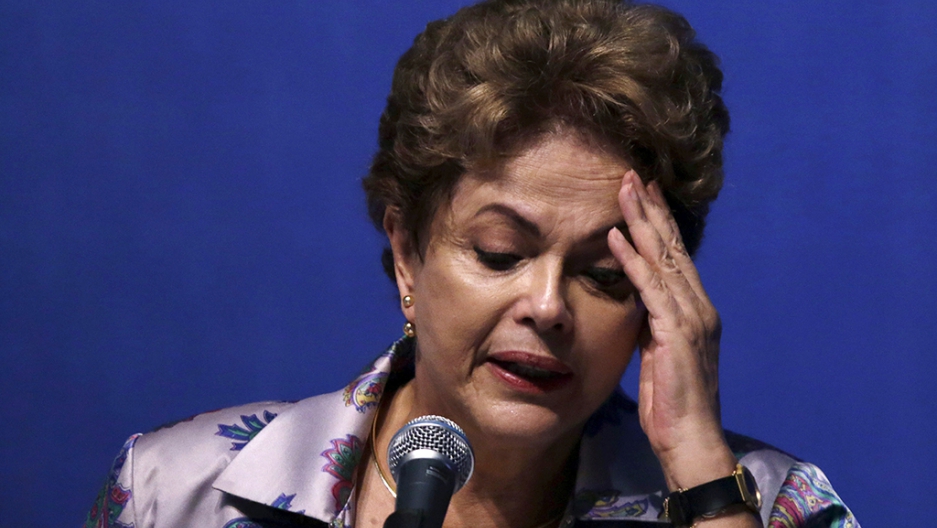 That’s kind of a big deal. Brazil is Latin America’s largest country, the world's seventh biggest economy, after all.

But it also may not be such a big deal. In fact, this whole thing might even be good for Brazil in the long term.

If that sounds confusing, well, it is. There are a lot of messy politics going on in a country a long way away. And the accusations against Rousseff are tricky too.

So let us break it down for you. We’ve put together an idiot’s guide (no offense) to Brazil’s impeachment, handily packaged in five questions you were too embarrassed to ask.

On Dec. 2, a powerful conservative congressman opened impeachment proceedings against moderate leftist President Dilma Rousseff. What that basically means is Brazil’s Congress is going to investigate allegations of corruption against her, personally. Then Congress will vote on whether to remove her from office.

The proceedings are long, tedious and complex, and will likely last at least several weeks. But, essentially there are three main phases:

a) A congressional committee spends a few weeks investigating the president's alleged corruption. Rousseff has several chances to respond to those allegations and defend herself. Then the committee votes. A simple majority (more than 50 percent) in favor of impeachment means we move to phase b).

b) The lower house of Brazil’s Congress looks at what the committee has come up with and takes a vote. If two-thirds of this house votes for impeachment, we move to phase c), and Rousseff must take a leave of absence.

c) The upper house, the Senate, also takes a vote. Again, two-thirds of senators need to vote for impeachment for it to happen.

Want more details on that? Go read this excellent explainer on the nitty-gritty of how this process works.

2. What, exactly is the president accused of?

This is probably the trickiest part of this whole thing. For one thing, a third of the lawmakers picked for the impeachment committee face criminal investigations themselves, according to congressional news site Congresso em Foco.

For our purposes, suffice to say that Rousseff is accused of allowing her government to play a sort of shell game with government funds. Known as “fiscal pedaling” or “backpedaling,” this accounting trick enabled government accounts to look healthier than they actually were. She denies breaking any budgetary rules.

For more nuts and bolts on this, read this story.

Impeachment has happened here before. The first president elected after Brazil’s dictatorship was impeached for corruption in 1992.

Rousseff's rivals have been threatening to remove her for a while. The country’s in the middle of a dismal recession and is dealing with huge scandals that keep getting bigger. After winning re-election last year, Rousseff has become extremely unpopular.

But there are plenty of people who think Rousseff will come out of this just fine. While the allegations against her still need to be looked into, at the end of the day many experts think this is really all about politics and power.

A two-thirds vote for impeachment in both houses of Congress will be tough to get. Rousseff’s ruling coalition controls a significant majority in the legislature. In other words, there will have to be some pretty incriminating evidence that comes out in phase a) to convince her party to mutiny.

Rousseff’s leftist coalition also needs to stick together. On Friday one of her cabinet ministers, who belongs to another party that's a main coalition partner, resigned — a significant setback.

However, the smart people over at the Eurasia Group, a political risk consultancy, think Rousseff is probably going to survive this just fine. They’ve given her at least a 60 percent chance of seeing out her term, which ends in 2018, and have made the point that if she does dodge impeachment, she’ll be seen as much stronger.

Eurasia Group also pointed out that Friday's resignation of the aviation minister could be bad news for Rousseff. All eyes will be on her coalition to see if there are any more defections.

4. What happens if Rousseff is, indeed, impeached.

If the impeachment against Rousseff succeeds, her vice president, Michel Temer, takes over until her term ends in 2018.

Want to know more about Temer? Go read this New York Times story about him.

5. So why should I, or anyone outside Brazil, care?

On the one hand, this may look like some esoteric political shenanigans on the other side of the world.

Sure, everybody wants a happily stable nation for the 2016 Rio Olympics, but there's got to be other reasons, right?

Go back to this story's opening: Brazil is a world power. Its economy is bigger than that of India, Russia and Canada. And while Rousseff has a good chance of surviving impeachment, if she doesn’t, that would almost certainly lead to even more bad news economically and politically.

Economists are saying this will be the worst recession here since the 1930s. And Brazil is the economic powerhouse of the region.

If the problems keep piling up, and the president gets booted, Brazil gets closer to economic and social chaos. That won’t be good for the region, and it won’t be good for America and Europe’s trade partners. An economically and politically destabilized Brazil means a lot more than just cheap caipirinhas at Copacabana. It could have far-reaching and, let’s face it, unknown, repercussions in the long term.