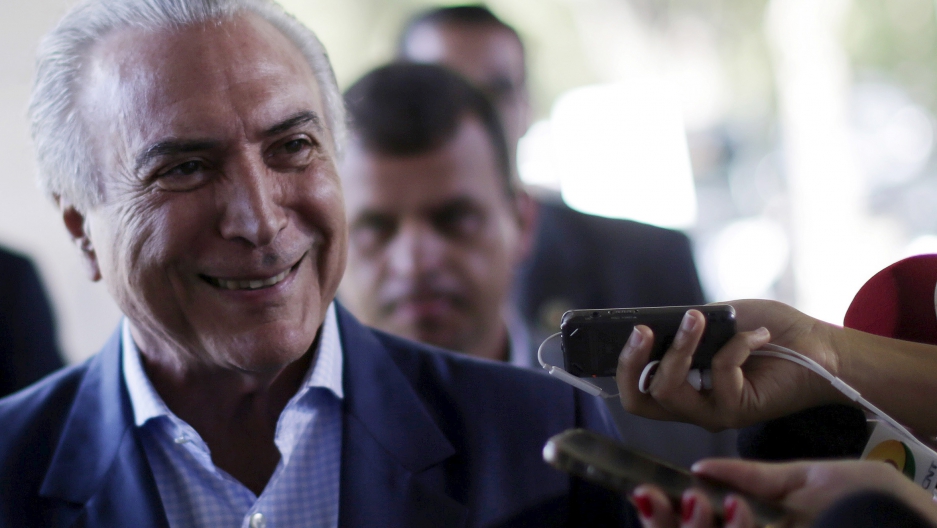 Brazil’s Senate just voted to put President Dilma Rousseff on trial for impeachment for breaking financial rules, a move that has pushed her out of office, at least temporarily.

After lawmakers debated more than 22 hours into early Thursday, Rousseff now has to step down for up to 180 days while senators investigate her. Then the Senate will hold a final vote on whether she should be impeached.

Rousseff is accused of using state bank money to hide holes in the national budget, which critics say was an attempt to make government accounts look healthier for her 2014 relection victory. She denies any wrongdoing and calls the impeachment effort a “coup.”

Here’s the thing, though: Temer is accused of doing the same things as Rousseff. Last month, a high court judge ordered lawmakers to discuss impeachment proceedings against him, too. If Rousseff is guilty of crimes, his accusers say, then so is he.

That means the new acting president could be impeached, too. Yeah, seriously.

That’s not all. Like Rousseff, Temer is named in a case filed with the Supreme Electoral Court that alleges political parties took illegal contributions for their 2014 campaigns. The case is part of a massive corruption scandal embroiling politicians, businesspeople, and the state oil company, Petrobras.

Temer, age 75, is also under investigation for receiving $1.5 million from a construction company, which he claims were legal campaign donations.

And, to top it all off, Temer was also just fined for exceeding campaign contribution limits and has been banned from running for office for the next eight years by a regional court in São Paulo.

That’s right: The man who just became de-facto president of Brazil will not be allowed to run for election.

Temer denies any wrongdoing. But the guy is on pretty thin ice.

At least in theory.

As the last few months in Brazil have shown, however, details of purported crimes seem to be less important than plain old politics. Last month, the lawmakers voting to impeach Rousseff named a whole bunch of reasons — from “peace in Jerusalem” to “my unborn daughter” to “my mother Lucimar.” There was very little mention of the actual misdeeds that are supposedly the basis for impeachment.

Many commentators view Rousseff’s ouster as a political, rather than a legal gambit.

And the politics is really messy. Something you don’t see in the United States — though they ran the government together, Rousseff and Temer belong to different parties, the Workers' Party (PT) and the Brazilian Democratic Movement Party (PMDB) respectively. Their coalition fell apart as Rousseff became more unpopular and her impeachment more likely. Since the split, the two have become mortal political enemies.

Brazil-based journalist and lawyer Glenn Greenwald has fumed that the impeachment is an antidemocratic conspiracy designed to bolster elites.

The Financial Times recently wrote: “Ms Rousseff's mistake was to allow her popularity to fall to the lowest levels of any president. She also mishandled conflicts in congress with her coalition partner, the PMDB. This opened the way for her enemies to look for excuses to impeach her.”

The political dynamic in Congress therefore is ultimately more significant than whether or not Temer signed off on the same fiscal practices while acting as president in Rousseff’s absence, analysts say.

And, unlike the ostracized Rousseff, Temer is starting out with “a very oversized governing coalition” in Congress, the Eurasia Group consultancy says, plus the support of businesses anxious for reform.

There’s also an outside chance the Senate investigation won’t result in Rousseff being finally impeached, Borges said. Impeachment requires a two-thirds vote of the Senate, and if she is found innocent, Rousseff would get her job back, he said.

The last time a Brazilian president was headed for impeachment, he resigned before the Senate even began its trial. Rousseff, however, has vowed to fight her impeachment to the bitter end.

“I may have made mistakes, but I have never committed crimes,” she said Thursday after the Senate vote.

There’s also another slim chance the political tide turns against Temer and in favor of Rousseff during the trial, Borges said. A lot now rests on how Temer fares in his first few months in office, he said, and how this country fares on the whole while Rousseff is out of the picture.

“Who knows what’s going to happen in 180 days?” Borges said. “Let’s suppose this country explodes and everything goes down the drain; or Temer is forced out by people in the streets; or some scandal happens, [Rousseff] may actually come back!”