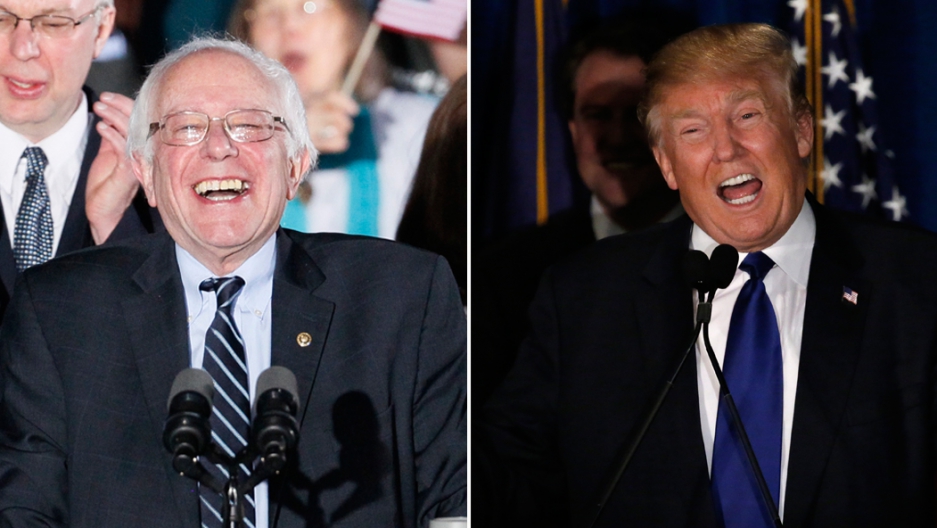 While some Americans muse about migrating to Canada if this year's election results don't please them, other Americans are already experiencing the election-cycle spectacle from abroad. And that comes with lots of questions.

Londoners want to know why our primary elections are so complicated, says Stacy Hilliard, a Republican from Texas living in London. She voted absentee for Sen. Marco Rubio in her home state's primary.

“That’s always a big question,” she says. “But I’ll tell you what: I have friends over here [in London] who probably know more about the delegate selection system than friends and family back home in the US.”

The other main question is just one word: Trump?

“That’s kind of how they leave it and you have to answer,” she says.

Gary Younge, a columnist for the Guardian, answers the question often. He says, "People would ask me, 'They're not serious, right? This isn't really gonna happen?'"

Younge covered the American political scene for more than a decade and recently returned to the UK. He says he saw many politicians who reminded him of Donald Trump.

"Marine le Pen just endorsed Donald Trump," he says. "Not that it will get many votes from France, but nonetheless I think they all play to the same anxieties, which is a group of white, working class and lower middle class people who feel left behind by the world."

"It scares them a bit [to think of him as president]," says the political science PhD student. "The rise to power of Donald Trump parallels the rise they fear in Europe."

RELATED: Bernie Sanders wants us to be more equitable like Sweden. Could it work?

"It's the same trend that we're seeing in the US," he says. "They like that he is not part of the establishment, they like that Sweden can establish relations with a fresh president and not another Clinton or another Bush."

Higham says he will be voting for Hillary Clinton in the Pennsylvania primary from a cafe in Stockholm. He says he doesn't meet many Americans there, and the ones he does meet tend to be Democrats.

"You don't really meet Republicans living in Scandinavia," he says. "It's pretty rare for them to want to live in a country with such high taxation."

Back in London, Hilliard paints a different experience for Americans during election season. She says she's been cornered at parties to talk politics, or just hear a Brit spout off commentary about American politics.

Once she threw a party, and an American friend showed up with some beer. But before he could put it away, another man came up to him and lectured him nonstop for about 20 minutes about George W. Bush.

“He responded by saying, 'Hi. I’m Ted. And I’m going to go put my beers in the fridge, and I voted for Bush. It was nice meeting you,’" Hilliard recalls. "And the other guy says, ‘Oh! I’m so sorry.’”

So maybe Europeans have strong opinions about American Republicans, and maybe especially strong opinions this year. Younge, the columnist, says this election year is different from 2008, when he was still stateside.

"I remember in 2008, I think her name was Gayle Quinnell who got the mic from John McCain and said, 'You know, I don't support Obama because he's an Arab,'" Younge recalls. "And then John McCain took the mic from her and said, 'No, ma'am, no ma'am, he's not. He's a decent American citizen with whom I have fundamental disagreements."

And while Higham in Stockholm thinks Swedes view America as more conservative than Europe, he says they also see it as more of a melting pot — "more open to integration, and so for that [anti-immigrant, especially anti-Muslim] rhetoric being reproduced in the US by Donald Trump is shocking for them."