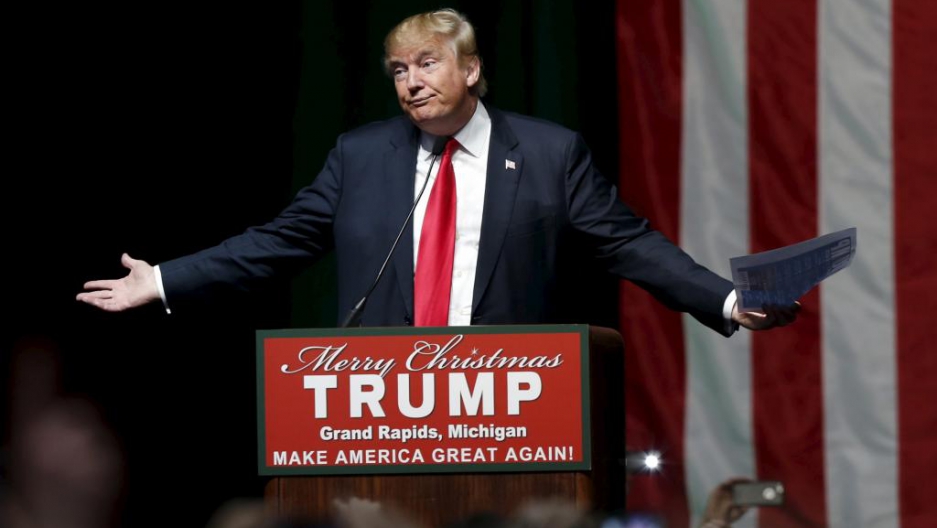 For many Europeans, Donald Trump is a figure of fun: the bling, the wacko comments, the name — which is British children's slang for “fart” — and of course, the hair.

Yet Europe has its own breed of right-wing populists, and their seemingly inexorable rise toward the continent's corridors of power, like Trump’s toward the US Republican presidential nomination, is no joke.

From nationalists wooing mainstream voters in France to barely disguised neo-Nazis scoring votes in recession-racked Greece, the radical right is on the march in a Europe where terrorism and the unprecedented refugee influx have added to the destabilizing effects of a long economic crisis.

The rightists don't form a united movement, though, and many issues divide them.

More from GlobalPost: 14 unbelievably racist things European (and Canadian) politicians are saying about the Roma

In the Netherlands, the Freedom Party is hawkishly pro-Israel, while members of Hungary's second-largest party Jobbik are openly anti-Semitic.

While many on Europe's radical right share Trump's admiration for Vladimir Putin's leadership qualities, Poland's new ultra-conservative government is deeply suspicious of the Russian president and pushes NATO to strengthen defenses against Moscow.

Still, the new rightists have much in common: simplistic solutions to economic problems; loathing for the European Union; hostility toward migrants and minorities; and promises of muscular security measures to allay voters’ fears over terrorism.

Here's a look at five of the most prominent Trump-ettes making noise in today's European politics: 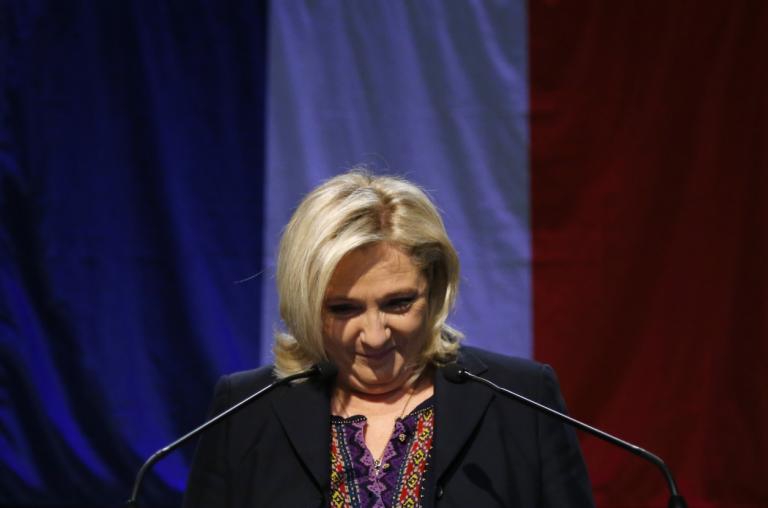 From the wine towns of Burgundy to resorts along the Riviera, more than 6 million French voters gave Le Pen's National Front (FN) their vote in the first round of regional elections held Dec. 6, less than a month after the deadly terrorist attacks in Paris that killed 130 people.

The FN was France's biggest winner in those polls, coming first in seven of the 13 regions. "The people have spoken, and France is again holding its head high," Le Pen told supporters as the results came in.

Spooked by the scale of the FN's success, moderate voters turned out in force to ensure the far-right was defeated in the second round. It worked: the FN ended up winning nowhere, a setback that denies Le Pen any regional power base from which to launch an assault on presidential elections scheduled for 2017.

More from GlobalPost: What would happen in a region ruled by France's far-right?

Yet Le Pen won't go away. Her supporters denounced a stitch-up between the traditional parties. "They have sabotaged democracy, but we will redouble our efforts," declared Marion Maréchal-Le Pen, the leader’s niece and a youthful candidate who came close to winning the Riviera region in the south.

Marine Le Pen is famously anti-immigration, but even she thinks Trump went a bit too far with his call to ban Muslims from entering the United States. "Seriously, have you ever heard me say something like that?" she told a TV interviewer earlier in December. Not that she's afraid of making controversial statements on migrants: Her campaign team last month put out a statement calling for the "eradication of bacterial immigration," claiming that migration was causing an "alarming presence of contagious diseases." 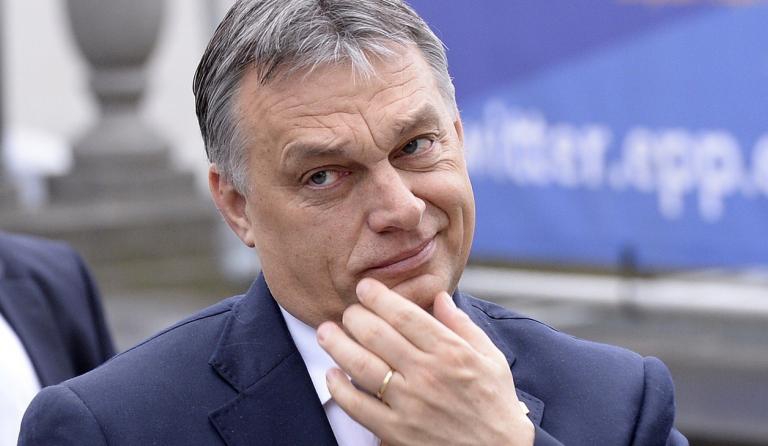 Hungary's prime minister doesn't line up with radicals like Le Pen. His Fidesz party sits in the European Parliament with mainstream center-right parties like those of German Chancellor Angela Merkel or Spanish Prime Minister Mariano Rajoy.

But when it comes to whipping up alarmist language over Muslim migrants, Orban can teach Trump a thing or two. "If you allow thousands or millions of unidentified persons into your house, the risk of … terrorism will significantly increase,” he said in a recent interview with Politico, adding that "all the terrorists are migrants."

Orban says refugees represent a threat to Christian Europe and he built a massive fence along Hungary's border to keep them out. He denounces liberal democracy, praises Putin, and accused Merkel of "moral imperialism" for seeking a more welcoming European response to refugees.

More from GlobalPost: Why refusing to accept Syrian refugees in the US is a terrible idea

Since his election in 2010, Orban has been accused of setting up an authoritarian state, jiggling with electoral laws, placing cronies in the judiciary and media, and squeezing funding for critical groups.

Hungarians love him. Orban was reelected in 2014 with more than double the combined vote of the next two candidates.

Mainstream politicians are critical of Orban, but they also know the alternative is even less attractive — Hungary's second-largest party is Jobbik, a far-right group so extreme even the likes of Le Pen refuse to work with it. 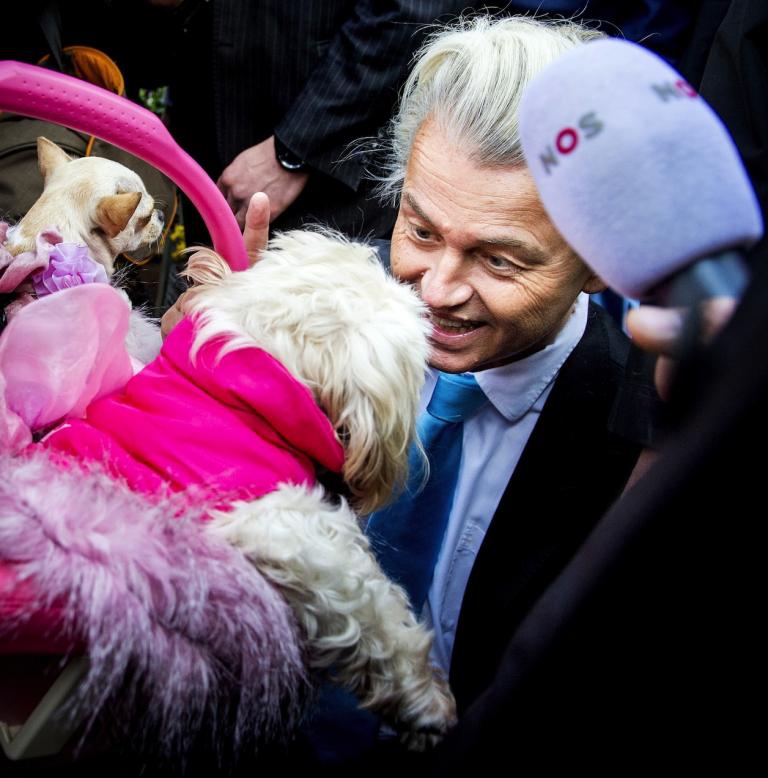 In this 2014 photo, Geert Wilders greets a little dog at a market in The Hague during campaigning.

The leader of the Dutch Freedom Party (PVV) is perhaps the European politician who comes closest to Trump, at least if we’re talking hair.

Renowned for his blond mane, Wilders was celebrating his award earlier this month as "Politician of the Year" by viewers of a popular TV current affairs program — the third time he's picked up the title.

Wilders is a Trump fan. "I hope @realDonaldTrump will be the next US President. Good for America, good for Europe. We need brave leaders," he tweeted on the night Trump made his call to bar Muslims from entering the United States.

I hope @realDonaldTrump will be the next US President. Good for America, good for Europe. We need brave leaders. pic.twitter.com/FWJSaQdClM

Wilders is fiercely anti-Islam and surged in 2015 opinion polls thanks to the refugee crisis and the attacks in Paris. All polls from September to December put the PVV in front with over 30 percent of the vote, double its score in the last elections held in 2012. Wilders is looking like a prime contender for the next parliamentary election, due by March 2017.

He says the refugee crisis is "an Islamic invasion," warning of "masses of young men in their twenties with beards singing Allahu Akbar across Europe."

More from GlobalPost: Even in election defeat, Europe's anti-immigrant movements are growing stronger

In December he caused outrage in Turkey — which is a NATO ally just like the Netherlands — in a video claiming Islam is incompatible with human rights and democracy. "You are no Europeans and you will never be. An Islamic state like Turkey does not belong to Europe," he said in the video, which ran in English with Turkish subtitles. "We do not want more but less Islam. So Turkey, stay away from us. You are not welcome here." 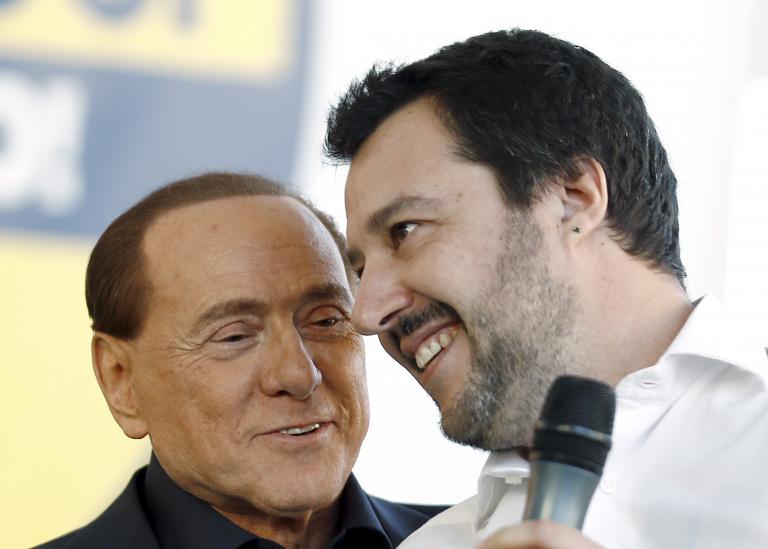 In post-Silvio Berlusconi Italy, the neatly bearded Salivni is a rising star. His Northern League party made significant gains in 2015 regional elections and has consolidated its role as the leading force on the right, ahead of the Let's Go Italy Party of former Prime Minister Berlusconi, whom Trump has also been compared to.

Salvini has succeeded in building support by putting his party's traditional demands for secession for Italy's wealthier northern regions on the back burner while he focuses on voters' refugee worries.

The man who regards Trump as “a heroic and colorful person" says the Italian navy should drive back the refugee "invasion." He warns of refugees bringing in disease and adds that those with scabies should give "a big hug" to the country's center-left Prime Minister Matteo Renzi. Once he suggested Italians should renounce their nationality and then apply for refugee status so they could be paid benefits.

The politician, whose stunts have included posing naked on a magazine cover (with a strategically placed duvet), even took on Pope Francis. "We don't need to be forgiven ... how many refugees has the Vatican taken in," he told his party radio in response to Francis' call for forgiveness for those "who shut the door on refugees." 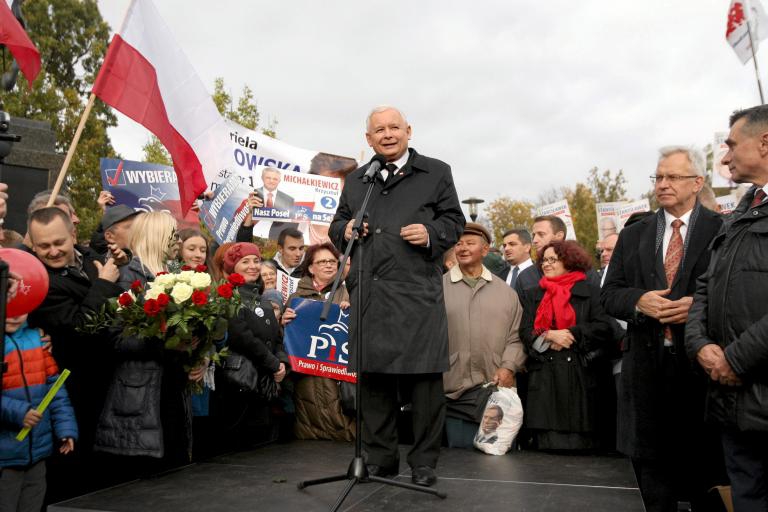 Jaroslaw Kaczynski, leader of Poland's main opposition party Law and Justice (PiS), speaks on the last day of campaigning ahead of parliamentary elections in Lublin on Oct. 23, 2015.

The conservative nationalist government that swept into power in Poland in October hasn't taken long to raise alarm bells in Europe.

"What is happening in Poland is dramatic and has the character of a coup d’etat," said Martin Schultz, speaker of the European Parliament. Luxembourg's foreign minister Jean Asselborn, who is serving as head of the EU Ministerial Council, warned basic European values were at risk of being "upended" in Warsaw.

Kaczynski is not in the government, but is the driving force behind the ruling Law and Justice party (PiS), which has triggered concern by seeking to increase its influence over the constitutional court, civil service, intelligence agencies and the media since taking office just months ago.

More from GlobalPost: A Polish town council rejected Winnie the Pooh as its playground mascot because he's a 'hermaphrodite'

The new Polish authorities are impressed with the way Orban runs Hungary — including his attitude toward refugees. Kaczynski is another who fears those fleeing war in Syria are a threat to Europe's health. "Various parasites, protozoa that are common and are not dangerous in the bodies of these people, may be dangerous here," he said on the campaign trail in October.

Poland has been a rare European economic success story in recent years. It’s the only EU member that avoided dropping into recession after the financial crisis of 2008. Yet growth was uneven and conservative rural areas often felt left out, fueling discontent with the center-right, pro-EU forces that had run the country since 2007.

When it comes to Putin, Kaczynski disagrees with Trump and many European rightists. The new government is pushing for a tougher NATO line on Moscow. Kaczynski's brother Lech was killed in 2010, when he was Poland's president, in a plane crash over Russia. Many PiS supporters suspect Putin had a hand in the accident.