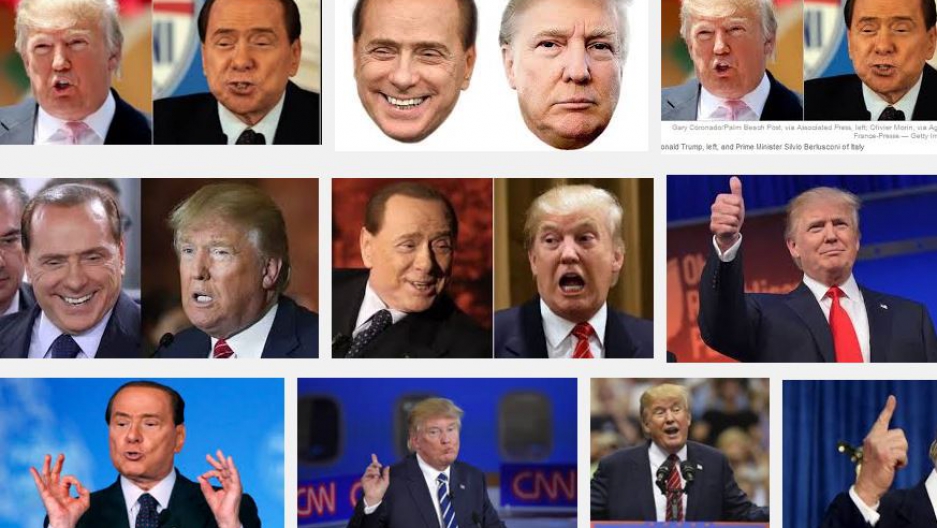 Is Berlusconi like Trump? Is Trump the American Berlusconi?

Presidential candidate Donald Trump continues to sit high in the poll, despite his controversial comments about immigrants and women. Before this campaign, we knew Trump as a TV personality and real estate mogul. Not as a politician.

So if trying to imagine him as President Trump is hard, or even inconceivable, well, just look to Italy to get an idea of what could be.

“Of course, a lot of people say like, Is Berlusconi like Trump? Is Trump the American Berlusconi? And a lot of people are making the comparisons these days," says Gianni Riotta, a columnist with the Italian newspaper La Stampa.

He's referring to former Italian Prime Minister Silvio Berlusconi. There are some big differences between Berlusconi and Trump to be sure. On the books, Berlusconi is richer even than the Donald, and looms larger over his country's political scene.

But Riotta says the two controversial political figures also have a lot in common.

“I think that there is something that's really similar in the campaign of Donald Trump and the old campaigns of Silvio Berlusconi. It’s that the mainstream media, including the average educated news anchor or columnist, find these guys buffoonish and crass and don’t want anything to do with them, while the real Italian and the average American can bond with these guys. So of course I find the rhetoric and thespian style of Donald Trump very dangerous. I find it really unsettling that he’s managing to be so successful. Clearly Trump taps into the anger of the white middle class and very often the mainstream media fails to connect with this constituency.”

Let’s say we do end up with President Trump and he continues to say things like he’s been saying. How did Berlusconi’s bravado and in-your-face style serve him once he was in office?

“I don't really think that Trump will be elected, but to follow your game and imagine this possibility, see what Berlusconi did. He was elected three times and he, let’s say, ‘died’ in the last election in 2013. Did he manage to make Italy rich again? He failed. Is Italy better off than it was in 1994 when Berlusconi took power? It’s worse off.  Did Berlusconi by magic renovate the Italian economy, transform Italian schools? No he didn’t. Why? Because to have the right agenda and to tap into the anger of the voters can make you an excellent campaigner, but then when you have to be a political leader and negotiate, it doesn’t work like that.”

Funny thing is that as alike as Berlusconi and Trump are, the two don’t seem to have ever met face to face. You can almost imagine a SNL skit with the two powerful men in one room.

“I think that they’d try to best each other. ’I have more money than you, I’ve had more wives than you, and I have more followers than you!’ It’s very difficult when you have two egos of that size in the same room.”