A group of five Uyghur mothers stood next to a United Nations building in Ankara, Turkey, on Wednesday, holding signs bearing images of their missing children.

These mothers say they were separated from their families by the Chinese government’s campaign of forced labor camps and surveillance, which has targeted the ethnic Uyghur minority living in the Xinjiang autonomous region since 2017.

The women insist that they will wait there until Turkish officials agree to a meeting with them — they want the country’s leaders to pressure China to help find their kids. China’s foreign minister is visiting with Turkish officials this week, and the mothers said they plan to participate in protests with the Uyghur community there.

Related: ‘All of us have been arrested at least once’: Kurdish press in Turkey walk a fine line

The women, who began their sojourn to the capital city of Ankara on foot from Istanbul on March 8 — International Women’s Day — walked for two weeks before being picked up by police and driven to Ankara this past Saturday.

“We can’t stay home, doing nothing. We feel that we have no choice.”

“We can’t stay home, doing nothing. We feel that we have no choice,” said Kalbinur Tursun, who has had no news of her five eldest children in almost five years.

In addition to getting help reuniting with their children, the women hope that by putting their message out in a public way, their children will know they were looking for them.

Many Uyghurs living in the diaspora have heard no word from their relatives in China since 2017, when people who made calls or sent messages abroad began receiving harsh prison sentences.

The US, Canada and the European Union have designated China’s treatment of the Uyghurs a genocide, and imposed sanctions on several high-level government officials this week.

China’s crackdown on the Uyghurs was billed to the rest of the world as a fight against domestic terrorism, known as “Strike Hard.” It quickly became clear that isolated incidents of violence by Uyghur nationalists were being used to justify arbitrary detentions, torture and invasive, high-tech surveillance techniques to control Xinjiang’s predominantly Muslim Uyghur minority.

Turkey, bolstered by refugees who have fled in recent years, hosts one of the largest Uyghur diasporas in the world. Local nonprofits estimate at least 50,000 Uyghurs live in the country. Many families, particularly those with several children, were forced to arrive in Turkey separately. Often, one parent would stay behind to sell a home or acquire passports for younger children while the others fled to safety. In the process, relatives say, the family members remaining in China were sentenced to reeducation camps or forced labor programs, their children’s whereabouts unknown.

The issue in Turkey is so dire that a boarding school in Istanbul houses and educates dozens of unaccompanied Uyghur children whose parents were arrested in China.

Informal groups of Uyghurs often gather with others from the same hometown, sharing any news they have heard from relatives still in the country. Dozens of parents say their minor children remain in China, and have spent the past years begging the Turkish government to help locate them.

“I’ve been fighting for [my daughter] for a year, and nothing has happened,” said Fatima Emir, whose daughter was 18 months old when she left her in the care of relatives to leave for Turkey. “I can’t believe that in 2021, I can’t get any information. I’m tired.”

Separated from family members in China

For many of the mothers, their decision to move to Turkey began not with Strike Hard, but with China’s family planning policies. In most cases, Chinese couples are permitted to have two children, but one or two more are permitted if the family lives in a rural area or is a member of an ethnic minority. This is a relaxation of a previous rule, which allowed most families to have just one child before 2015. 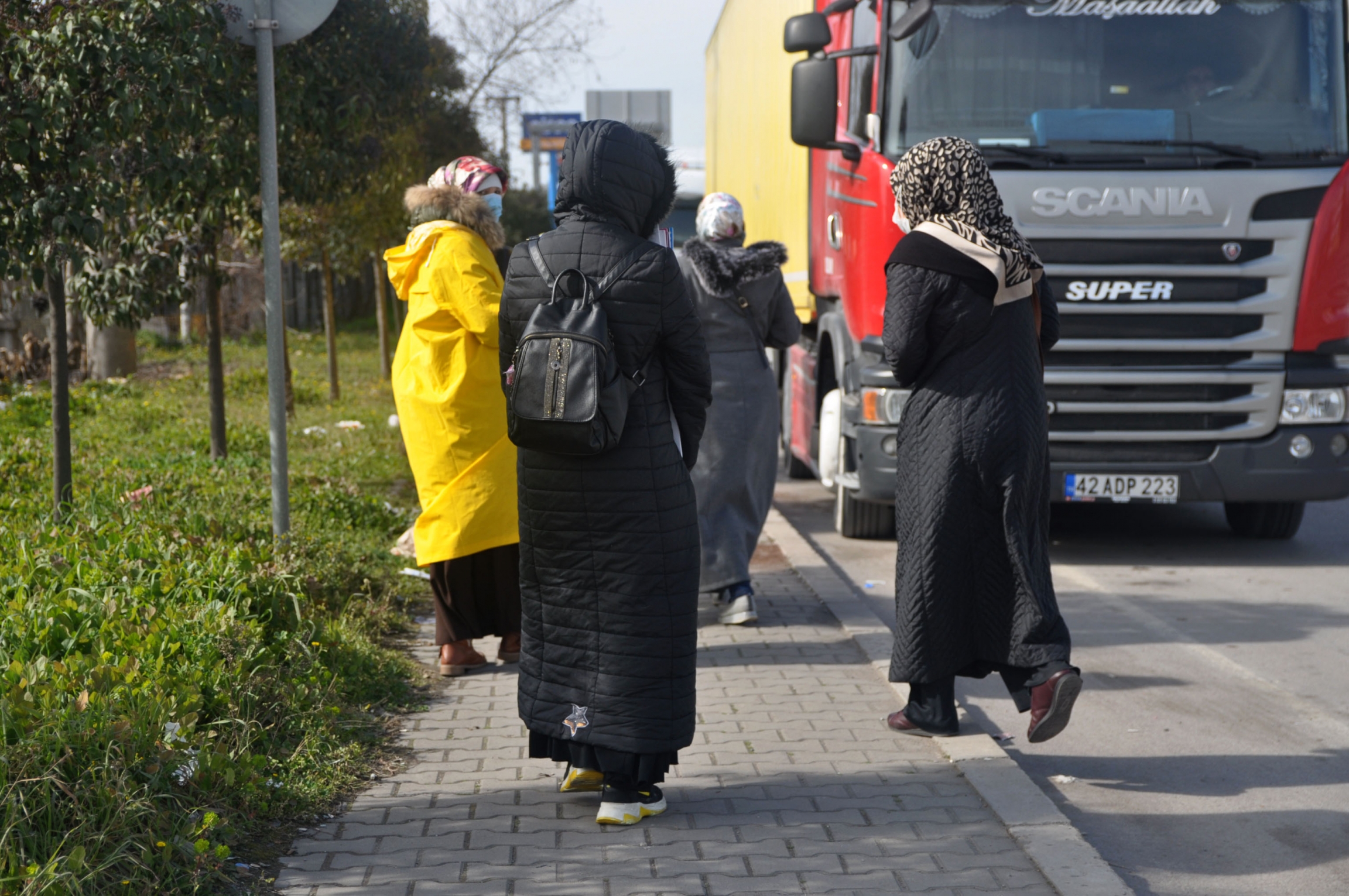 These mothers say they were separated from their families by the Chinese government’s campaign of forced labor camps and surveillance, which has targeted the ethnic Uyghur minority living in the Xinjiang autonomous region since 2017.

While living in a rural part of Xinjiang, near Turpan, Meryem Ablimit, 47, said she complied with these policies, terminating eight pregnancies in all.

“I cooperated with the government. They threatened that they would take our land. But the doctor told me that if I had another abortion, it would threaten my life.”

“I cooperated with the government. They threatened that they would take our land,” Ablimit said. “But the doctor told me that if I had another abortion, it would threaten my life.”

So, Ablimit decided to move to Turkey. She arrived in Turkey in February of 2016 with her two youngest children. She was pregnant with her fourth. Her husband stayed behind with their eldest daughter. But after Ablimit left, her husband and daughter’s passports were revoked, and they were stuck.

According to an investigation by The Associated Press, a campaign of pregnancy checks, forced abortions and sterilizations made birth rates plummet in predominantly Uyghur areas of China by as much as 60% between 2015 and 2018.

Chinese officials rejected the claims, saying birth control measures in China are more lenient toward ethnic minorities and that women who told the AP they had been forcibly sterilized were hired actors.

But Kalbinur Tursun, who is among the protesting mothers, remembers that in her hometown of Kashgar, women were required to use an IUD and have their doctor check it every month. Having more than two children in an urban area required official permission and the payment of a fine.

“For us, it was a humiliation. Why should we have to go and get permission to give birth?” she recalled.

Tursun and her husband, both deeply religious, decided they wanted more than just two kids. She hid her third pregnancy, only leaving the house at night in a car with tinted windows. And then, she had her fourth. And a fifth. In all, she and her husband have seven children together.

“As a Muslim, we could feel our Islamic culture, our values were under pressure. I wanted to have more children and educate them, and raise them with our Islamic values. To keep our identity,” she said.

It was almost a way of affirming herself as a person — through motherhood. But the children would have to be split between family homes in Xinjiang’s largest city of Urumqi, and the family’s hometown of Kashgar.

“We couldn’t live as a family together,” Tursun said. “It wasn’t a life for us.”

This also meant that sometimes, she’d have to leave her older children home alone.

One day in 2015, Tursun’s 13-year-old son went out playing with his friends, fell into a lake and drowned. The grieving parents were wracked with guilt.

“I felt like I couldn’t even protect my son,” Tursun said. “So, when I got pregnant again, I felt it was my duty to come to Turkey.”

Tursun and her husband decided that she would move to Turkey first, while he waited behind to secure passports for all of their children. She made the journey with her youngest son while she was seven months pregnant — giving birth alone at a hospital in Istanbul.

Not too long after that, she learned that her husband in China had been arrested.

“The police came and arrested him, put a bag on his head as if they were kidnapping him right from his shop,” Tursun said.

Relatives told her he was given a 15-year prison sentence for trying to send money out of China — something that isn’t unusual for most of the country’s citizens but can trigger an arrest if you’re Uyghur.

Related: An American journalist was murdered in Turkey. Why didn’t the US investigate?

Tursun’s in-laws took the kids back home to keep them safe. The news came intermittently, but it grew more and more alarming. Massive reeducation camps were being built on the edge of town, and people were being detained for offenses as mundane as making a phone call abroad.

“The last time I spoke with my sister-in-law, she said that there were new rules,” Tursun said. “She would have to clean the street in front of the house, and the inside of the house every day, and government officials would come to check. Her husband was going to a mandatory reeducation course from morning until night.”

A walk to beg for information

Kalbinur has spent four years trying to get the Turkish government to help her locate her children in China, and get them back. She’s written letters to the United Nations and asked Turkish businessmen traveling to China to try to get information. And, she’s scoured social media apps like Douyin, China's local version of TikTok, hoping for glimpses of what’s going on.

She’s convinced she found a video of her daughter, Ayşe, in a boarding school for children whose parents have been detained. She shared her story with WIRED, hoping it would help her find her kids.

“For me, right now, the big thing is just knowing that they’re alive,” she said, as she and the other protesting mothers walked along a highway near Gebze, an industrial district just east of Istanbul.

After sitting on a patch of grass for a light lunch of bread and raisins, the women explained why they had to leave China without their children. The walk to Istanbul had been an exhausting ordeal — their feet were swollen and there had been several days of cold rain. They donned bright yellow knee-length rain jackets and continued on.

“I cannot bear it anymore,” said Amine Muhemmed, 30, of Hotan. “The pain of missing my children is not like any other kind of pain.”

She left her three eldest children, ages 13, 11 and 9, with their father when she left for Turkey in January of 2017, she explained. She had become pregnant again, and feared that officials would force her to terminate the pregnancy, which had happened to her cousin.

“It’s a very normal thing in Hotan. If they find out that you’re pregnant more than you’re allowed to, they’ll force you to have an abortion,” Muhammed said.

When she begins to speak, her voice quickly grows into a long, emotional tirade, finally cutting off when she can’t stop crying. Her husband, she says, was sentenced to 15 years in prison after her departure.

Her youngest children who are in Turkey with her, she says, keep asking where their father is.

“They ask me why everyone has a father except for them,” she said. “It breaks my heart into pieces.”

Correction: An earlier version of this story misspelled the name Fatima Emir. It has been updated.