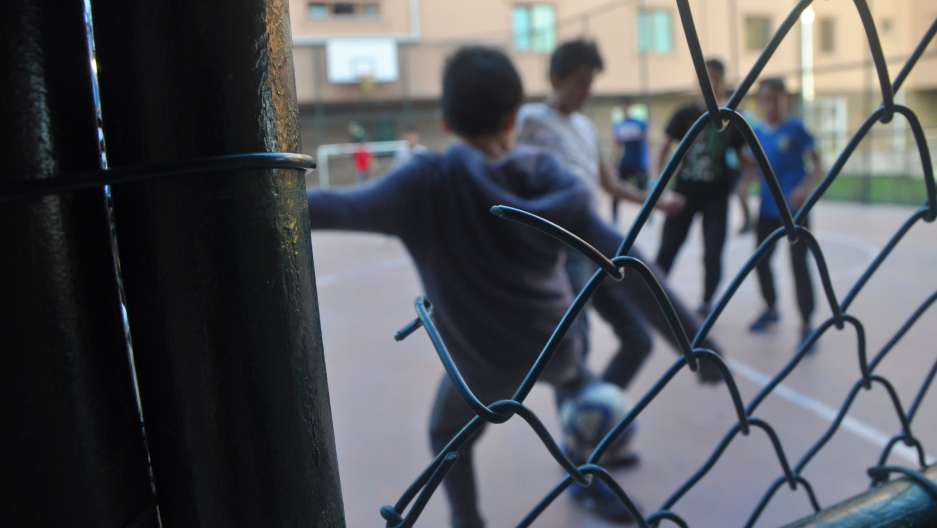 Students play a soccer game on a basketball court at a boarding school for Uighur children on the outskirts of Istanbul, Turkey.

On the outskirts of Istanbul, a recently opened boarding school cares for dozens of Uighur children whose parents are imprisoned in China’s northwestern Xinjiang province.

In the dormitory, they sleep four boys to a room on bunk beds. A list of chores is taped to the wall. But heavy on the students’ minds is the fate of their parents, who are caught in China’s widespread system of forced labor and "reeducation" camps that have detained more than a million members of a predominantly Muslim ethnic minority.

The school’s teachers are told to avoid the subject, but the children know what’s going on.

“Sometimes they isolate themselves and get really sad,” said Mohammed Izatullah, a counselor tasked with caring for their daily needs. “I do everything I can, but I don’t really know what to do. And it happens a lot.”

Community leaders say up to 400 Uighur children are living without their parents in Turkey, often in the care of a relative or family friends. In the most common separation cases, families first arrived in Turkey from China within the past five years. Perhaps they were visiting relatives, or one member of the family caught the eye of Chinese authorities and decided to leave temporarily.

Meanwhile, China’s efforts to crack down on so-called “religious extremism” mounted. In 2016 and 2017, Uighurs living in Turkey who had access to a relatively uncensored internet witnessed an unprecedented acceleration of arrests in Xinjiang. Realizing the situation was deteriorating rapidly, Izatullah explains, one or both parents returned to China to get their affairs in order to prepare for a permanent move to Turkey. They left their children behind.

In these cases, the parents traveling back were often detained upon their return to China, or their passports were confiscated, he said.

“They decided to leave their children with someone they knew and go back. Try to sell their homes, their business, collect their value and come back. But they never came back.”

“They decided to leave their children with someone they knew and go back. Try to sell their homes, their business, collect their value and come back,” said Izatullah, whose own wife and daughter are still in China, barred from joining him in Turkey. “But they never came back.”

The children, still in Turkey, have been unable to speak to their parents directly, receiving news from intermediaries, instead. No one knows when — or if — the families will be reunited.

The school, called Oku Uygur Bilig Yurdu, opened last year. These 33 boys were the first to attend as boarding students because their living situations were considered the most unstable.  A wing to house female students remains unfinished. 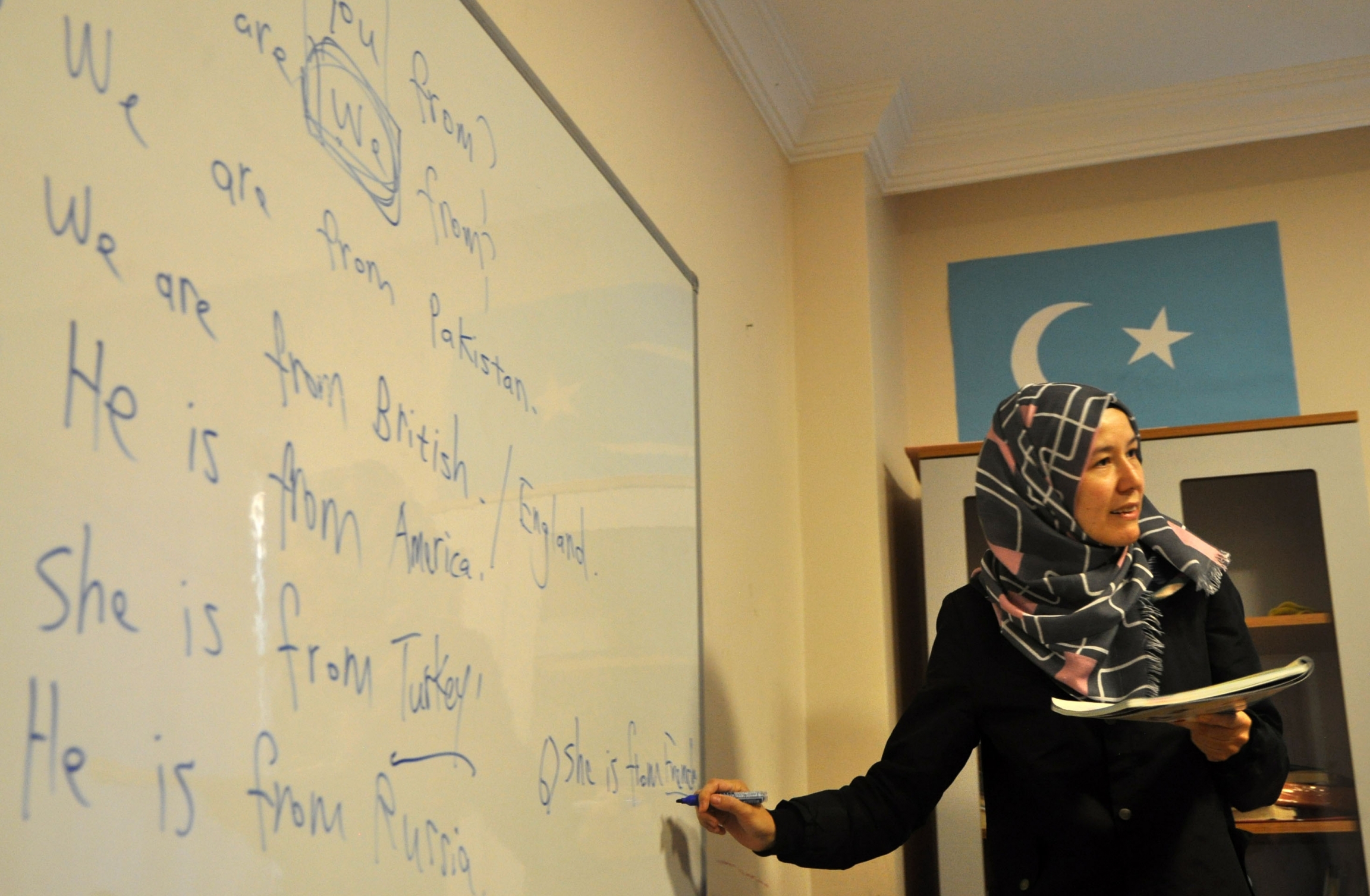 Through a combination of visa regulations, family ties and a perceived shared cultural history, Turkey has rapidly evolved into a destination for Uighurs leaving China. Many say they’ve fled arrest and surveillance in Xinjiang, where even a mild form of religious expression of one’s Uighur identity can catch the eye of the authorities.

“People in our homeland are fighting for survival,” said Rushan Abbas, the executive director of the US-based Campaign for Uighurs. “What’s happening in Turkey is a direct result of this.”

Observers believe the system of detentions has imprisoned at least 10% of Xinjiang’s Uighur population, as well as introducing policies such as forced “homestays” and the collection of personal genetic data. The Chinese government’s internal rationalization for the crackdown, as well as its meticulous planning, was detailed in a New York Times investigation this week, based on more hundreds of pages of leaked documents.

Related: As families are lost to China’s ‘reeducation camps,’ US Uighurs are split 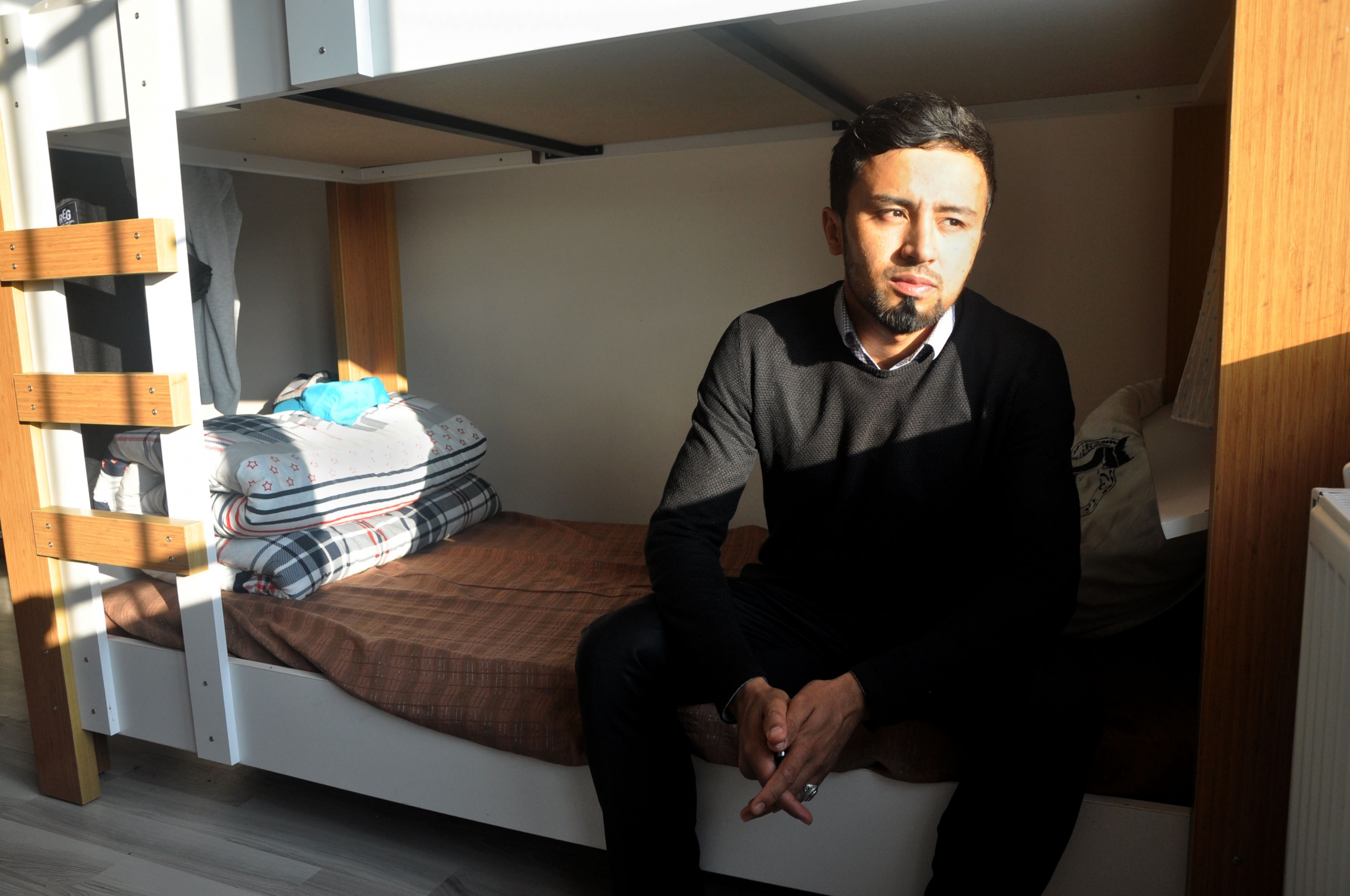 Mohammed Izatullah, 30, sits on a bunk bed in the dormitory.

One of the school’s students is an 11-year-old boy with a slight frame, but a wide smile. Drawing is his favorite part of the school day; chicken and noodles are his evening meal. But when asked to introduce himself, the first thing on his mind is a much more serious matter.

“I wish [for] freedom for my country, and I want to fight for the freedom of my country,” the boy said in Uighur, as his classmates crowded in a circle around him on the carpet.

He calls his homeland East Turkestan, a name Uighurs in the diaspora use to describe China’s Xinjiang region, as well as their hopes for its independence.

Izatullah said he does his best to distract the students from thoughts about their parents. Usually, he takes them aside and tries to kick around a ball. If all else fails, he takes them to the mall — for ice cream, a new toy. Anything.

As the sun sets, a group of girls plays a duck-duck-goose game with a teacher. About 100 children at the school are non-boarding students who take Uighur classes in the evenings. They live with relatives nearby.

“They like it, they like the teachers and the Uighur friends,” says Iman Yakob, 52, who sends his grandchildren to the school for evening classes. “Especially because we aren’t able to help them with their homework from their Turkish school.”

His 8-year-old granddaughter says she likes both schools. Once, she says, her Uighur teachers took the students to the beach.

“I like to play with my friends. We do homework together and play together,” she said. 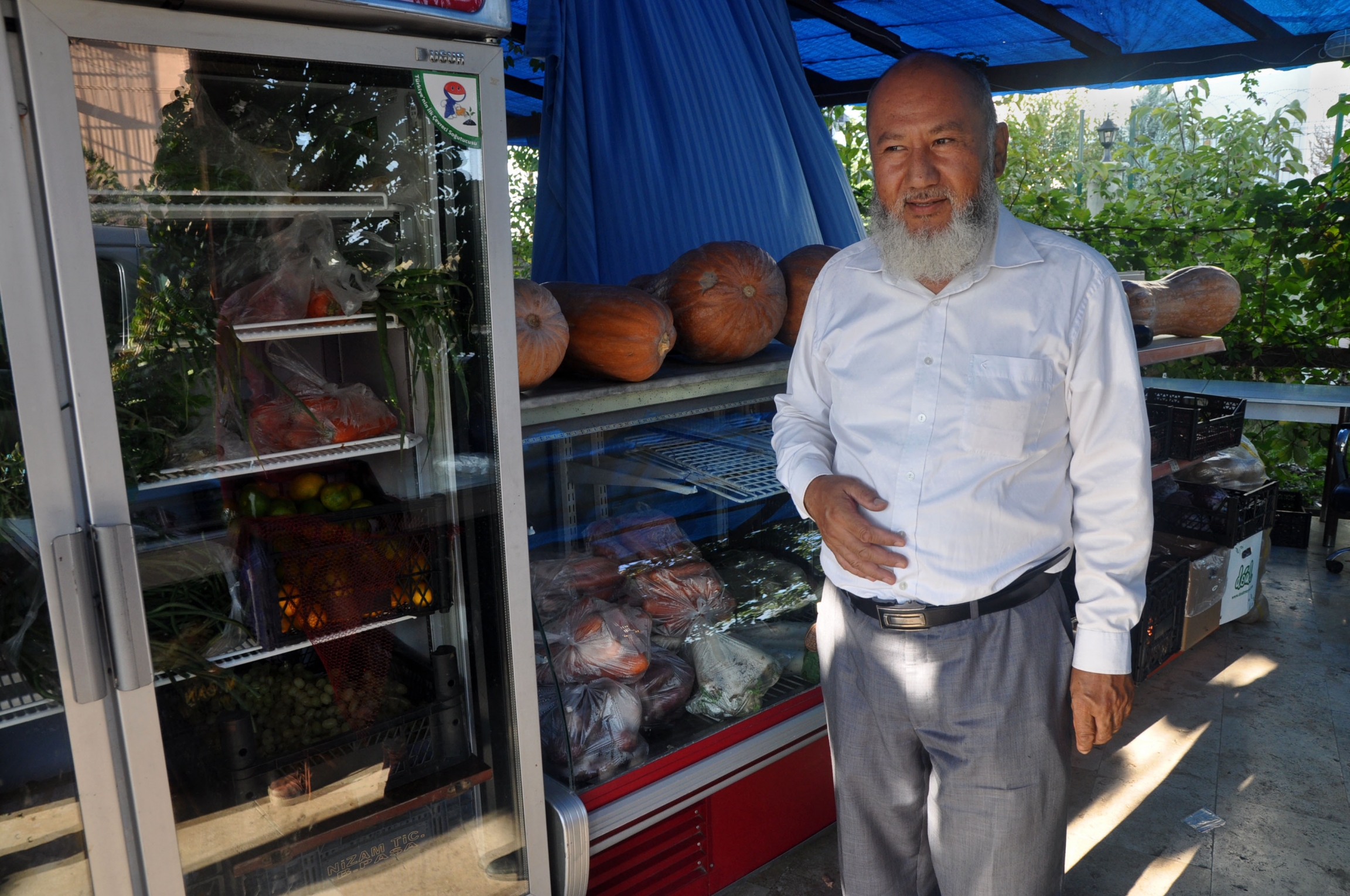 Imran Yakob is raising four of his grandchildren in Istanbul, supporting them with the proceeds of a small roadside shop.

Yakob arrived in Turkey in February of 2018. Now, he’s raising two of his grandchildren on the proceeds of a small shop. He sells fruit and vegetables that are hard to come by in Turkey, such as Chinese long beans and chives.

“We try to take care of them, but of course we can never do the same as their parents,” he said.

The children’s parents and two younger brothers are still in China, he explained. They’ve been unable to make contact since their father was arrested and taken to a detention camp.

“We have never told them the full, true story,” Yakob said. “We always try to tell them there’s an issue with their passport, one day they will come here. Don’t worry.”

Uighur community leaders say that as far as they know, this boarding school is the only one of its kind.

“We’ve been helping the orphans for six years as a support service,” said Munavver Ozuyghur, director of the Istanbul-based East Turkestan Nuzugum Culture and Family Association. “Not all of their fathers are dead, but there is no communication in the camps.”

A Turkish nongovernmental organization provides financial assistance to 20 students equivalent to $22 per month, Ozuyghur said. For the rest of the students, she’s hoping to arrange for a legal status that would establish that they are unaccompanied minors.

The school stays afloat with donations from a group of Uighur businessmen that the director, Habubulla Kusemi, prefers not to name. As for the children themselves, he worries about their safety all the time.

“We know there have been statements by Chinese police, that wherever Uighurs are in the world, they will reach them and put them back in jail,” Kusemi said. “So we worry. We do everything we can to keep them safe.” 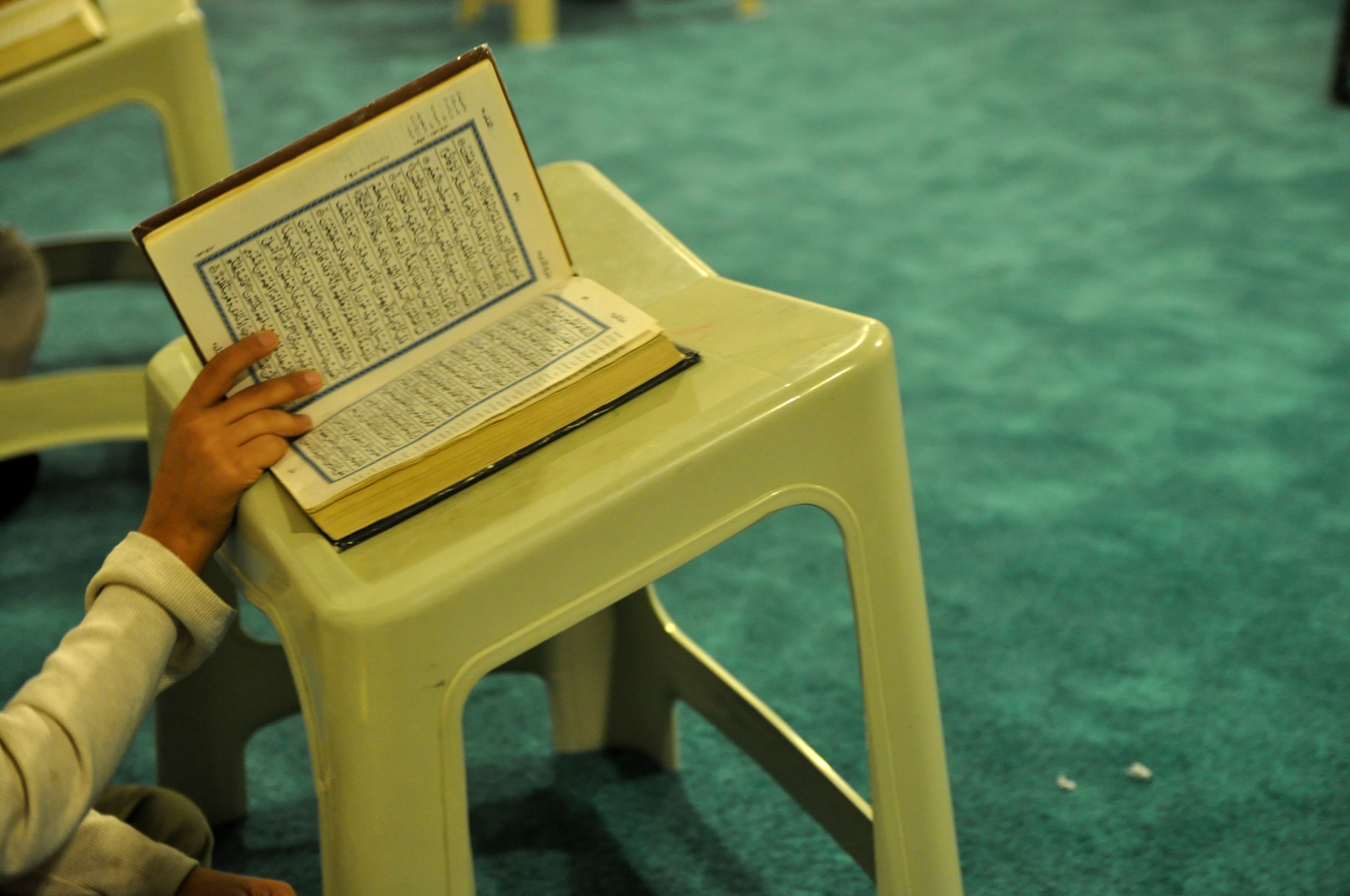 A student recites from the Quran during an evening religious class. In China’s Xinjiang region, the open practice of Islam is often used as grounds to place citizens in "reeducation camps."

It’s impossible to keep something like this a secret, he said. The location of the school, the identities of the kids. They have to assume the Chinese government knows everything.

Most of the children here know that their parents are detained in camps, Kusemi says. In some cases, they’ve received word that their parents have died in custody. And that puts a big question mark on their future. Without their parents, they are living alone in a foreign country. What are their options?

As the kids gathered for dinner one recent evening, Kusemi said his goal is to keep the students housed and cared for until they can go to university.

“We have a responsibility to the nation to keep our identity. And language is the most important element to keep our national identity,” Kusemi said.

Otherwise, he fears, their Uighur identity will cease to exist.