The Istanbul office of Turkey’s largest Kurdish news agency is on the top floor of an old building. The location of Mesopotamia Agency isn’t exactly a secret — but the doorbell isn’t marked, either.

It’s not easy being a journalist in Turkey where accusations of colluding with a terrorist organization is only a byline away. Being Kurdish only deepens the pressure.

Related: An American journalist was murdered in Turkey. Why didn't the US investigate?

“All of us have been arrested at least once. ... There’s even a joke saying that every Kurd will be arrested once in his life.”

“All of us have been arrested at least once,” said Sadık Topaloğlu, a journalist who leads the Istanbul bureau. “There’s even a joke saying that every Kurd will be arrested once in his life.”

Coverage by the Kurdish press of Turkey’s longtime struggle against the Kurdistan Workers Party (PKK) — a designated terrorist group angling for Kurdish autonomy in the southeast — often places them at odds with the government’s narrative about the conflict.

At the same time, it makes their work a crucial voice in an increasingly homogeneous media landscape. Occasionally, the Mesopotamia Agency will break stories that other outlets refuse to touch.

Now in its third year of existence, this digital news agency employs about 100 journalists in eight bureaus around Turkey, covering a mixture of politics, human rights and general news in three languages: Turkish, Kurdish and English.

Related: Report on murdered Saudi journalist to be released

The agency largely functions as a wire service — Kurdish newspapers throughout the country reprint their stories — but they also reach readers directly through social media, YouTube broadcasts and direct-messaging apps like Telegram. 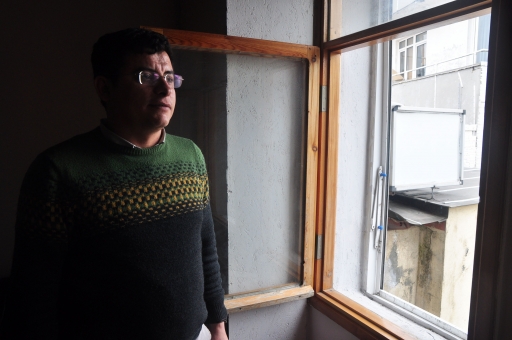 Sadık Topaloğlu stands in the Istanbul office of the Mesopotamia Agency, where he serves as bureau chief.

“Our system is similar to the other media outlets, except that the hierarchical structure is not so sharp for us,” Topaloğlu said. “Every day starts with meetings about the day’s agenda, and we discuss how to prioritize them.”

Occasionally, judges will issue a decision to block the website, an echo of state closures of Kurdish papers in the 1990s. But in today’s digital age, they simply copy their content over to a new URL to buy themselves more time. So far, they’ve done this 29 times.

“We’re advocating for democratic and individual rights of the Kurdish people and the working class. ... The Kurdish media gets more pressure, because it exposes what the government doesn’t want to be seen.”

“We’re advocating for democratic and individual rights of the Kurdish people and the working class,” Topaloğlu said. “The Kurdish media gets more pressure because it exposes what the government doesn’t want to be seen.”

Facing the 'consequences of the news'

This tension came to a head in September when two Kurdish men were captured during a military raid on their village in the eastern district of Van as the Turkish army sought out PKK suspects. They were then thrown to the ground from a military helicopter. One of the men died after several weeks in intensive care. Another survived, but barely. It was a horrifying reminder of torture methods used during anti-PKK operations in the '90s.

Officials refused to comment for several days. The mainstream Turkish press hardly covered it. But the Mesopotamia Agency was there to interview families and gather witness testimony and medical reports.

“We have a publishing policy. We are not focusing on the consequences of the news, we are focusing on its accuracy. ...Because the smallest manipulation, the smallest error — that gives the government a chance to create propaganda against us.”

“We have a publishing policy. We are not focusing on the consequences of the news, we are focusing on its accuracy,” said Sedat Yılmaz, Mesopotamia Agency’s editor-in-chief, from his post in the largely Kurdish city of Diyarbakir. “Because the smallest manipulation, the smallest error — that gives the government a chance to create propaganda against us.”

Related: Ressa: Duterte's 'weaponization of the law' is a threat to democracy

“Whether we are punished or arrested is not a priority for our agency,” he added.

Four of his colleagues were detained over their coverage of the helicopter story: Two from the Mesopotamia Agency, and two from an affiliated agency staffed entirely by women. Their homes were raided, and police searched the Mesopotamia Agency office in Van. Co-workers brought them sweaters and blankets in prison.

In the words of the prosecutor, Cemil Uğur, Andan Bilen, Şehriban Abi and Nazan Sala were accused of being members of a terrorist organization and making propaganda for an illegal organization. They denied the charges.

“I work as a journalist,” Uğur told the prosecutor. “There is no crime and concrete evidence in the file. Most of the scope of the file is newsworthy.”

Weeks later, Turkey’s Minister of the Interior, Suleyman Soylu, publicly accused the surviving victim of hosting PKK members at his home, saying the government had records of his guilt. But the minister provided no explanation of why it was necessary to throw a suspect from a helicopter.

Tensions have been particularly high lately for Kurdish journalists as Turkey continues a military campaign against the PKK in northern Iraq.

An effort to make peace with the PKK under the new Justice and Development (AKP) government collapsed in 2015, after the assassination of two Turkish policemen in the town of Ceylanpınar. Nine suspects were later acquitted of the murders in 2019.

The situation has only gotten worse. Last month, a failed operation to rescue Turkish hostages in northern Iraq led Turkish President Recep Tayyip Erdoğan to vow an expansion of military operations as he criticized Western allies for turning a blind eye.

Turkey’s government sees the United States as tangentially responsible for ongoing PKK attacks due to its support of Kurdish-led militias in the war against ISIS.

“The Turkish government does not want to solve the Kurdish issue. It wants to govern by polarizing society."

“The Turkish government does not want to solve the Kurdish issue. It wants to govern by polarizing society,” said Eren Keskin, a longtime human rights activist who worked as an attorney for Özgür Gündem, a Kurdish newspaper, at the height of violence between the PKK and the Turkish military in the 1990s.

“The distribution of the newspaper was banned, and children were distributing it illegally in the neighborhoods and streets,” Keskin recalled. “Three of those children were murdered, they were all between the ages of 9 and 11. Their killers were never found.”

Turkey’s struggles with the PKK are entrenched in popular memory. Leaders from both sides of the political spectrum have tried and failed to bring peace. They’ve also failed to reconcile with Turkey’s approximately 16 million Kurdish citizens, many of whom want more political autonomy and cultural freedom.

Kurdish media in Turkey has come a long way in the past 30 years, Keskin said. Those years of normalized violence, murders on the street, and people who going missing are largely in the past, but they’ve been replaced by political pressure, arbitrary detentions and lawsuits that drag on for years. Keskin herself faces a 26-year prison sentence, which she’s appealing.

“For the sake of those times, and the people who were murdered, I’m still keeping up my fight,” Keskin said.

While the current Turkish government sees the PKK as a dangerous and unpredictable nonstate actor, the Kurdish press tends to view it differently.

The Mesopotamia Agency, for example, does cover the violence of PKK attacks, but they also devote a fair amount of coverage to hunger strikers protesting the jail conditions of PKK’s imprisoned leader.

Some Kurdish journalists say it’s hard to stay neutral when the state sees you as an enemy.

“When they see the press card of Mesopotamia Agency, they see us as anti-state reporters, and either push us out [of a protest] or arrest us. ... Sometimes we pretend that we’re from a Turkish media outlet, so we won’t get arrested or beaten up.”

“When they see the press card of Mesopotamia Agency, they see us as anti-state reporters, and either push us out [of a protest] or arrest us,” said Semra Turan, a reporter. “Sometimes, we pretend that we’re from a Turkish media outlet, so we won’t get arrested or beaten up.”

The hardest stories to write, Turan said, are the ones where she interviews people who have lost family members during the conflict. There’s a war going on in Turkey, she said, and both sides are losing their lives. When she sees their mothers at a funeral, it breaks her heart.

“It takes me so long to write about those funerals,” she said. “Thinking about how I can write it so that those mothers don’t have to live through it again.”