Since the fire that engulfed Moria camp on Lesbos island nearly two weeks ago, more than 500 of the 12,000 displaced migrants and refugees have been taking shelter at a center run by Team Humanity, a nonprofit humanitarian organization.

“Now, it’s the time for them to go to the new camp,” said Emad Baghlani, one of the group’s coordinators, as he helped migrants pack and load their belongings into a bus that would take them to a new campsite co-managed by the Greek government and EU agencies.

These migrants were among the last of the more than 12,000 displaced still trickling into the new site on Sunday. Many who have already moved into the camp, a former military firing range, say conditions are inhumane, and they worry their new home will turn into the next Moria — a camp notorious for its squalid and overcrowded conditions.

“I hope to [leave] the new camp as soon as possible, to go to another country. I want to be free.”

“I hope to [leave] the new camp as soon as possible, to go to another country,” said Javad, a 13-year-old asylum-seeker from Afghanistan, who has been on Lesbos for 14 months with his parents and two siblings. “I want to be free.” 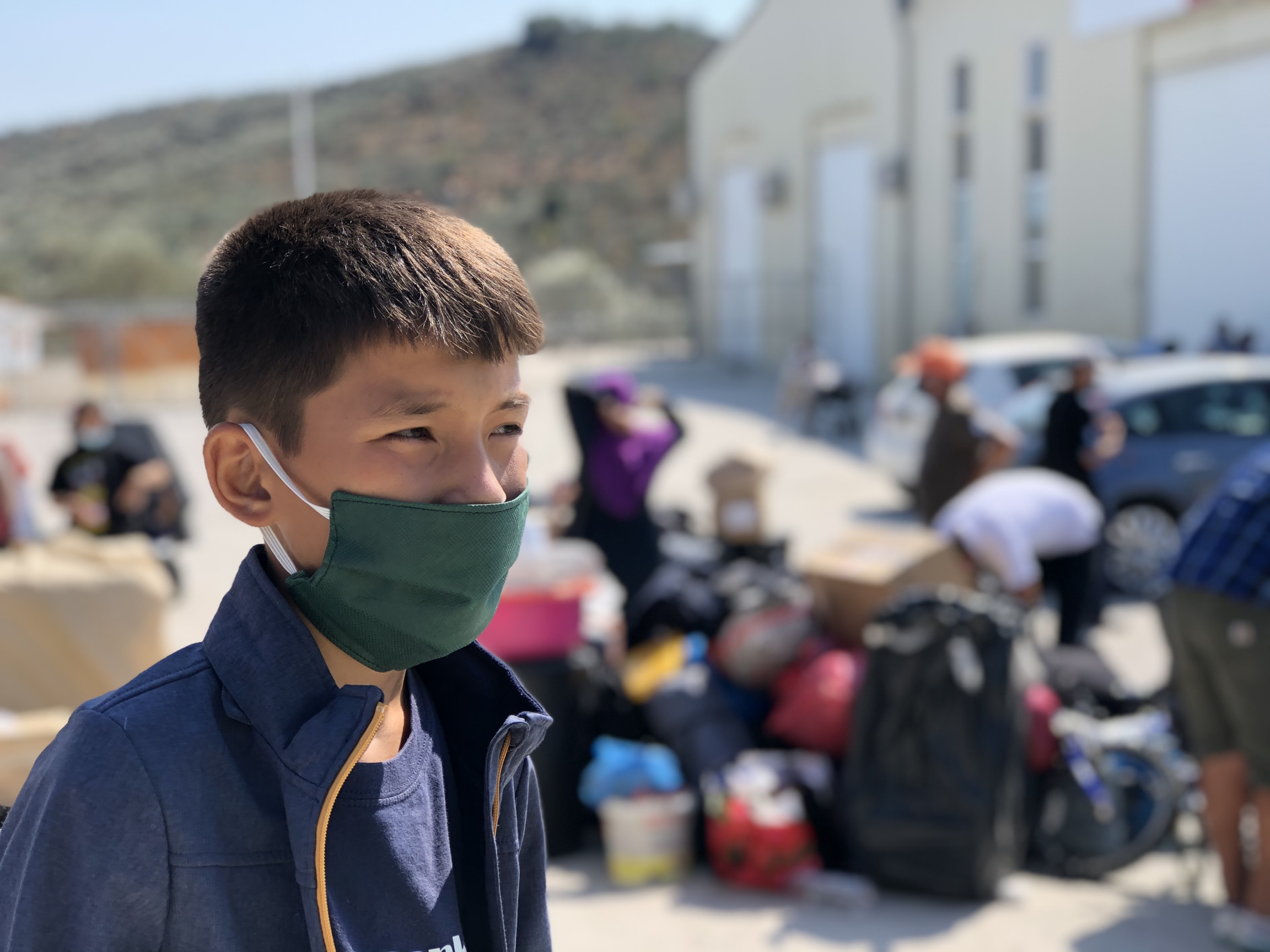 Javad, a 13-year-old Afghan asylum-seeker who’s been on Lesbos for 14 months with his two siblings and parents, says he doesn't want to be put in another camp.

A few feet away, a young Afghan asylum-seeker named Mohammad sat in the middle of a pile of black trash bags containing his and his family’s belongings, cradling a collared cat. Mohammad found the cat about six months ago while he was living at Moria camp, and named it Kuchulu, which roughly translates to Little. After hearing rumors that pets were not allowed into the new camp, he worried he would not be able to bring his feline friend along. 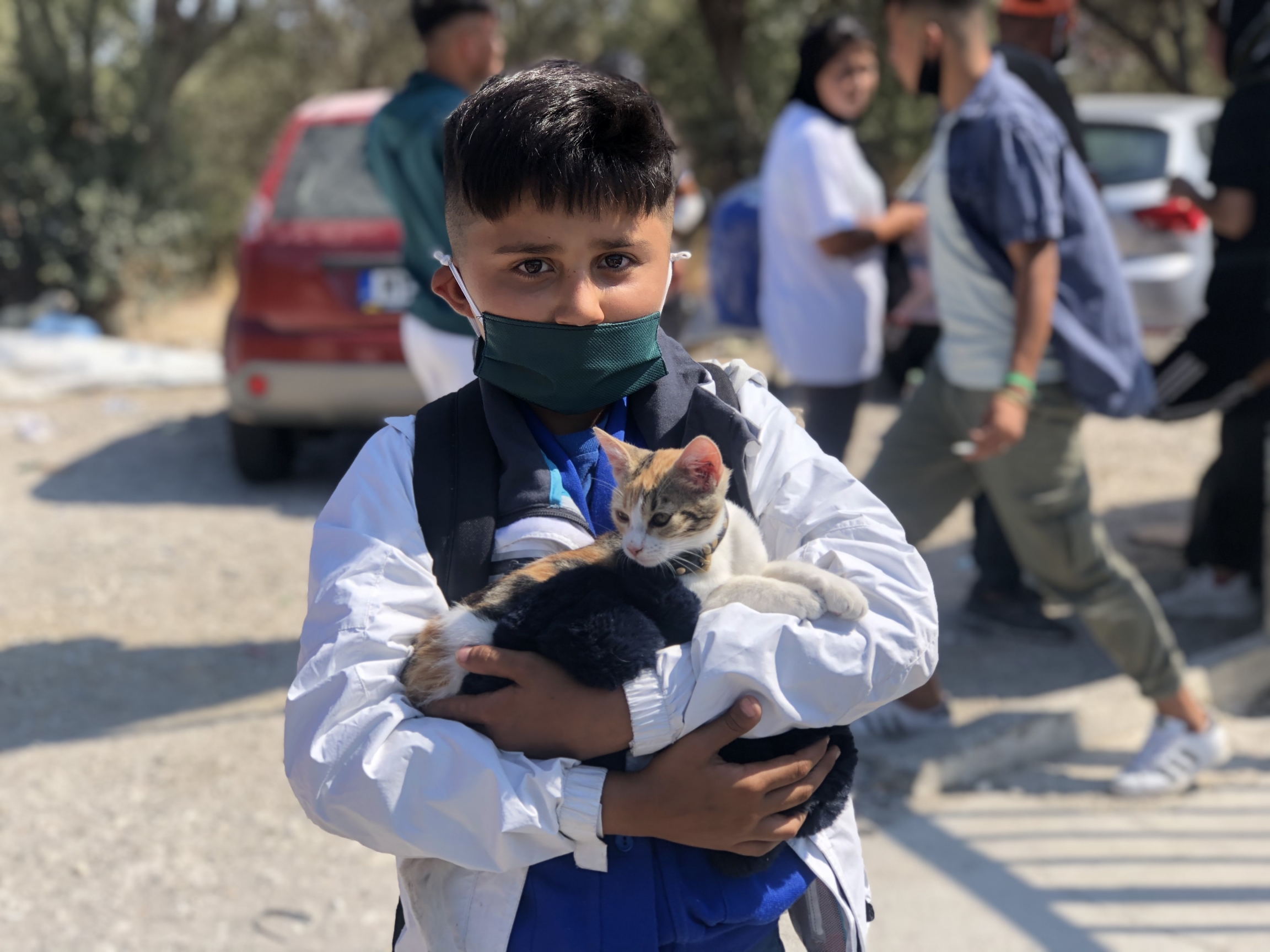 Mohammad, a young, Afghan asylum-seeker, found a cat he named Kuchulu while at Moria. He worries he won't be able to bring his feline friend into the new camp.

Nazanin, a 14-year-old, Afghan asylum-seeker, has already relocated to the new camp.

Nazanin says conditions inside the new camp are poor. There are too few port-a-potties and not enough pumps with running water for the thousands already inside the camp. Garbage was already starting to pile up due to a lack of adequate garbage bins and trash cans.

“It’s very crowded,” Nazanin said, adding that two families were being housed in each tent, regardless of the number of family members.

“I’m really worried that it will be Moria again.”

“I’m really worried that it will be Moria again.”

Related: Greece and Turkey sail toward a crisis of sea borders

Sources inside the camp told The World that single men are being packed into larger mega tents — about 150 men in each tent, and many are concerned about a COVID-19 outbreak under the circumstances. Currently, there are nearly 200 confirmed cases of COVID-19 inside the new camp, according to Greek authorities. Those who tested positive upon entering the camp were placed in a quarantined area walled off by barbed wire near the entrance of the camp.

A source inside the new camp just sent me this photo of mega tent where he and other single men are sleeping tonight. According to my source there are 8 such tents in the camp & 140-150 men are being crammed in each one. pic.twitter.com/A1cpdawGT0

Some migrants are also reporting issues with food distribution, which happens once a day. Some in the camp say there often is not enough food for everyone inside, forcing migrants to venture out into town to buy their own supplies. (Migrants are currently allowed to leave the premises between 8 a.m. and 8 p.m.) 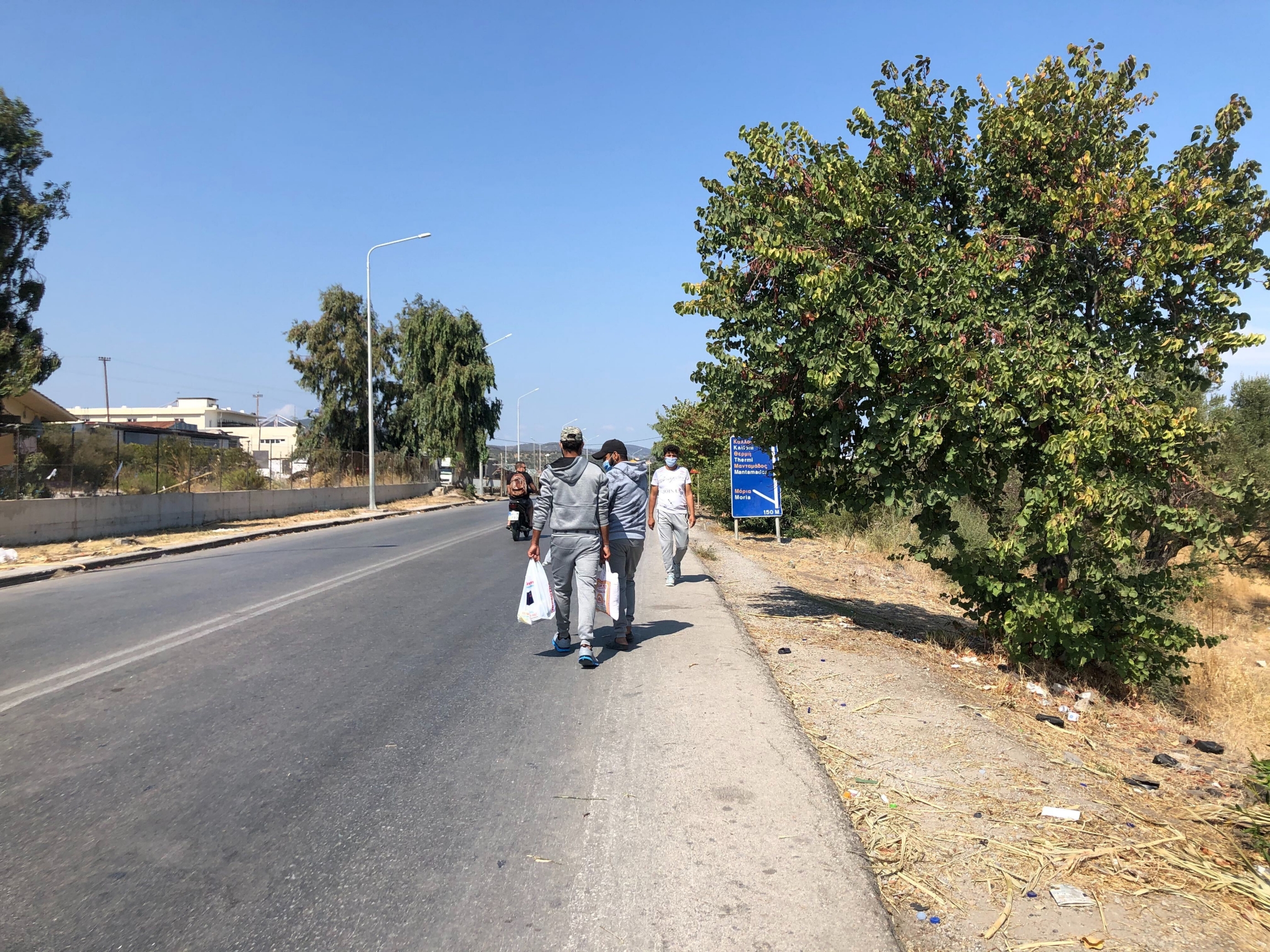 Two Syrian asylum-seekers return from a shopping trip to the port city of Mytilene, where they picked up rice, tomato sauce and other food. They say the food being distributed at the camp is not enough.

Because it’s right by the sea, some advocates say the camp is highly floodable and they’re worried about the safety of people come wintertime.

“Afghanistan is war. As you know it’s attacks and wars,” Nazanin said of her home country. “Because of that all we come here, come to Europe to have a good living. But [even] Afghanistan ... is better than this.”