Fatima, a 66-year-old grandmother from Afghanistan, spent a year living in Moria refugee camp in the Greek island of Lesbos. She felt stuck as she waited for her asylum claim to be processed.

It was overcrowded and filthy, she said in Dari, and sometimes there wasn’t enough food. But at least there, she had a roof over her head. Fatima asked The World to only use her first name to protect her identity.

After being displaced from her war-torn home country, Fatima finds herself displaced once more — this time, by a massive blaze that destroyed the entire camp early Wednesday morning.

After being displaced from her war-torn home country, Fatima finds herself displaced once more — this time, by a massive blaze that destroyed the entire camp early Wednesday morning, swallowing the basic shelter where she stayed with her family.

On Thursday she sat on a blanket spread out over dirt on the side of the road, crying as she cradled her 1-month-old grandchild. They are among the thousands of asylum-seekers on Lesbos who will be forced to spend another night on the streets. 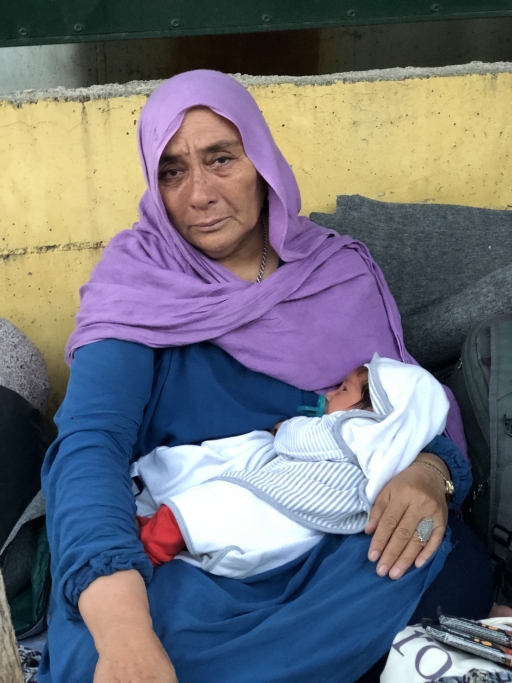 Fatima, a 66-year-old asylum-seeker from Afghanistan, cradles her 1-month-old grandchild after they were displaced by a fire in Lesbos' Moria camp.

Ever since the overnight fire, approximately 12,000 people — including thousands of children — have been taking shelter in areas surrounding the now-burned-down camp.

Migrants have laid down blankets, and a few have set up small tents on the streets, in parking lots and even in a cemetery. Most, like Fatima, came from Afghanistan.

Related: This beloved school gave migrants on Lesbos a chance to escape. A fire turned it to rubble.

The destruction of the camp worsened an already dire situation for refugees and asylum-seekers on the island. Many lost the little they owned in the blaze and are now stranded with little to no access to food, water and electricity. And that came on top of an outbreak of the coronavirus in the camp that prompted Greek authorities to implement a quarantine, preventing people from leaving.

The Greek government has said it believes the fire was set deliberately by Moria residents upset by the quarantine measures. Others have set it was set by fascists who do not want the asylum-seekers on the island.

Greek authorities are now taking steps to move some of the asylum-seekers — particularly unaccompanied minors — to the mainland. And representatives from some European countries, including France and Germany, are now stepping up to accept some of them, too.

In the meantime, the majority of those displaced from Moria are trying to fend for themselves. People who managed to save any of their belongings from the fire are hiding them wherever they can — inside dumpsters and plastic crates.

Some say Greek police have blockaded several parts of the island — an effort aimed at restricting their movement. But the blockade also prevents them from accessing supplies they critically need, such as food and medication.

Greek authorities are distributing food and water. But many of the migrants and refugees say it’s not enough.