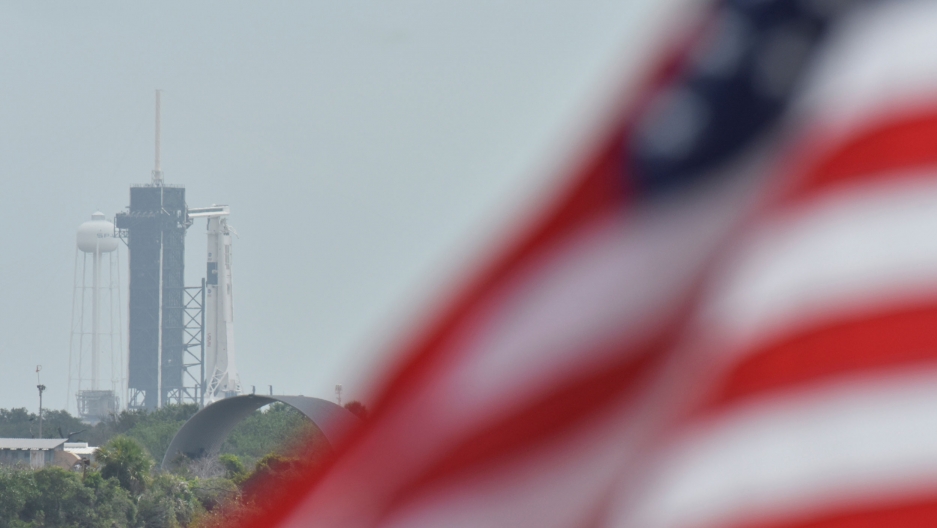 A US flag flutters in the breeze as the SpaceX Crew Dragon on a Falcon 9 booster rocket sits on Pad39A at the Kennedy Space Center in Cape Canaveral, Florida, May 27, 2020.

Stormy weather thwarted a landmark moment for private rocket company SpaceX and NASA on Wednesday, forcing launch directors in Florida to postpone what would have been the first flight of US astronauts into orbit from American soil in nine years.

The countdown, made especially suspenseful by shifting weather conditions, was halted just 16 minutes and 54 seconds before the SpaceX Falcon 9 rocket had been due to launch astronauts Doug Hurley and Bob Behnken on a 19-hour ride to the International Space Station.

From 2015: Why the SpaceX rocket landing is great for NASA

Hurley, 53, and Behnken, 49, had been strapped into their seats for a little over two hours before the launch was called off. Technicians in black suits and face masks then escorted the two astronauts back down the 265-foot-tall launch tower for the return trip to their quarantine-holding facility. SpaceX will make a second attempt on Saturday afternoon to launch the astronauts aboard its newly designed Dragon Crew capsule.

The astronauts were to have blasted off from the same launch pad used in 2011 by NASA's final space shuttle flight, which was piloted by Hurley. Since then, NASA astronauts have had to hitch rides into orbit aboard Russia's Soyuz spacecraft.

For Elon Musk, the chief executive officer of SpaceX and electric carmaker Tesla, the first manned SpaceX launch represents another milestone for the reusable rockets his company pioneered to make space flight less costly. SpaceX, founded by Musk in 2002, and formally known as Space Exploration Technologies, has never previously flown humans into orbit, only cargo.

Margaret Weitekamp, head of the space history department at the Smithsonian National Air and Space Museum, spoke with The World's Marco Werman about the future of US space flight.

Marco Werman: What do you make of this shift to privately-owned spacecraft?

From 2011: SpaceX rocket launch marks the beginning of the private era in space

Are there problems with decentralizing it that way?

I think that what they are looking forward to is being able to have different companies approaching the same kind of problem. And so the hope really is that by having SpaceX have its solution and Boeing have its solution, then you have an increased number of ways that you can support the International Space Station, which is still being supported by international partners.

Since 2011, US astronauts have been hitching rides to space with Russia. Most agree it's been a pretty fruitful partnership between the two superpowers. How do you see the shift to private American companies affecting the US-Russian space collaboration?

Being able to add private companies providing not only cargo but crew service to the International Space Station removes, at some level, the overreliance on the vagaries of geopolitics. And it also then — I think NASA is hoping — opens up their options in terms of turning their attention to exploration, going back to the moon, perhaps onto Mars, and also then being able to put the focus on international collaborations in terms of planetary science and astronomy.

From 2015: 'Welcome back, baby.' SpaceX rocket lands safely back on Earth.

So finally, this historic flight — it's slated to happen in the midst of the coronavirus pandemic. What special precautions were taken to ensure the safety and health of the astronauts and crews? And do you think they should have delayed for a few months or even a year to lessen the odds that the virus would not end up onboard the International Space Station?

I know that they have stepped up the crew isolation in anticipation of the launch and additional precautions were taken about trying to make sure that there was no transmission of the virus to the International Space Station. I think the biggest loss is how many of us would have certainly made a trip to Florida to make sure that we were able to see this historic launch in person will instead be collectively having the experience of watching it online or on TV.