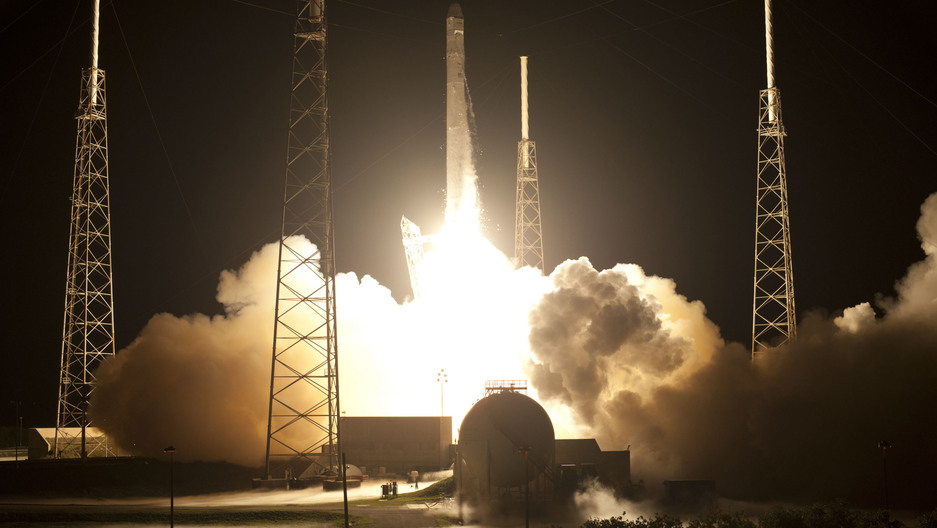 The International Space Station has previously only received spaceships flown by government agencies from the United States, Russia, Japan and the European Union. (Photo courtesy of NASA.)

The United States, Russia, Japan, the European Union and SpaceX could very soon all be members of a very exclusive club.

If all goes smoothly over the next few days, each entity will have successfully, and at some point historically, brought a vessel to the International Space Station.

On Tuesday, SpaceX’s Falcon 9 rocket and its unmanned Dragon capsule lifted off en route to the space station, marking the first ever flight of a commercial spacecraft to the space station. The flight could open up a new, private, entrepreneurial era in space.

“It was a big moment and sort of just one more step, but a very important one,” Lopez-Alegria said.

The privately funded SpaceX Falcon 9 private sector launch vehicle made its first flyby of the ISS on Thursday, while the old U.S. launch vehicles, the space shuttle fleet, were being delivered to various museums.

“The space shuttle did a lot of things for a lot of people and that made it very complicated, and ultimately, actually very dangerous. There was no crew escape system on the space shuttle. The fragile return vehicle was downstream of debris, which came off the fuel tank, thus that gave us Columbia,” O’Brien said.

“This vehicle is very specific. It’s very simple. It will have crew escape eventually and the vehicle is on top of the stacks,” he noted.

For the time being, the cargo and the crew destination are both the International Space Station. Lopez-Alegria said the space station is very involved with the program a procurement standpoint, but it is much less involved in the development of the program and vehicles.

“The difference between having SpaceX or Orbital design these cargo vehicles, and what you might think when you think of a space shuttle or a space station is that the government wasn’t very involved in the details of the development. They did provide some seed money, but they stayed out of the decision-making process,” he said.

Lopez-Alegria said the private sector space business is a combination of a cargo delivery, satellite delivery and tourism.

He said currently, the program is focused on taking cargo to the International Space Station. The next step is to try to extend its services to the commercial crew world by taking astronauts, NASA, and other partner astronauts to the ISS, a service that is currently being provided by the Russians.

“We would like to bring that service back to the U.S., launching folks on U.S. hardware from U.S. soil, on hardware built by American labor,” Lopez-Alegria said.

“There’s a guy by the name of Bigelow out in Las Vegas, who actually has vehicles orbiting the earth right now — inflatable vehicles, which he would one day like to turn into hotels. These are private destinations for the ultimate tourist."

He said it is difficult to predict the future of this new entrepreneurial era of space.

“Think of the people who designed and created what was then called ARPANET versus the entrepreneurs of today, Facebook and others, that give you the Internet. It’s a good analogy — the government engineers versus the entrepreneurs who are exploiting what the government has laid the groundwork for,” O'Brien said. “We’re in the transition from ARPANET to the Internet in space right now. I think having the private enterprise component injected into space, will lead us places we cannot predict."

O'Brien said, though there is always going to be a role for government in space, NASA should focus on heading toward Mars because there's not much demand to travel there.

"There’s not much of a business case to get to Mars at least right now, just because the cost to get there is so high. But we’re getting to the point where lower orbit is a place where hopefully, as the flight rate goes up, the prices go down, the demand goes back up, which drives the flight rate up, which drives the prices down. That virtuous cycle is what we’re after," he said.

The capsule cleared a series of tests and maneuvers Thursday in preparation for its docking attempt on Friday. If successful, it could change the future of private exploration in space.

“Obviously going to space involves a whole other host of risks. But, it’s about managing the risks, and certainly, people are going into it with their eyes open, we hope," O'Brien said.