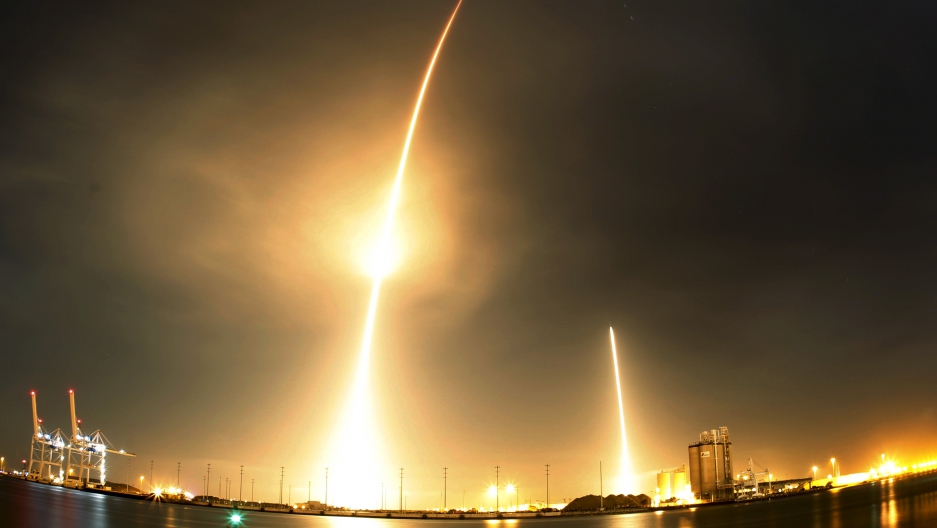 A long exposure photograph shows the SpaceX Falcon 9 lifting off (L) from its launch pad and then returning to a landing zone (R) at the Cape Canaveral Air Force Station in Cape Canaveral, Florida, December 21, 2015.
Credit: Mike Brown
Share

Using a rocket to propel commercial satellites into orbit and then safely returning that rocket to a small landing pad in Cape Canaveral, Florida doesn't sound quite as thrilling as, say, putting an astronaut on Mars. But it's a huge deal for the future of space exploration and for the private aerospace company that just pulled off the feat Monday night: SpaceX.

It's also a huge deal for NASA.

The reason is pretty simple: Getting to space is really expensive — and wasteful. If NASA and its private aerospace partners can reuse more of the equipment necessary to launch satellites, cargo, and humans into space, government budget sheets start looking a lot brighter. Hence SpaceX's quest for a reusable rocket and the government contracts that will come with it. And hence NASA's embrace of a form of private enterprise, which might look at first glance like a hostile takeover of space endeavors that were once the pride of the US government, but which actually liberates the American space agency more than it replaces it.

"If you had to buy a new plane every time you flew somewhere, it would be incredibly expensive," SpaceX founder and CEO Elon Musk told the BBC in 2012.

"A 747 costs something like $300 million and you'd need two of them to do a round trip. And yet people aren't paying half a billion dollars to fly from LA to London, and that's because that 747 can be used tens of thousands of times... You need to be in the position where it is the cost of the fuel that actually matters and not the cost of building the rocket in the first place." 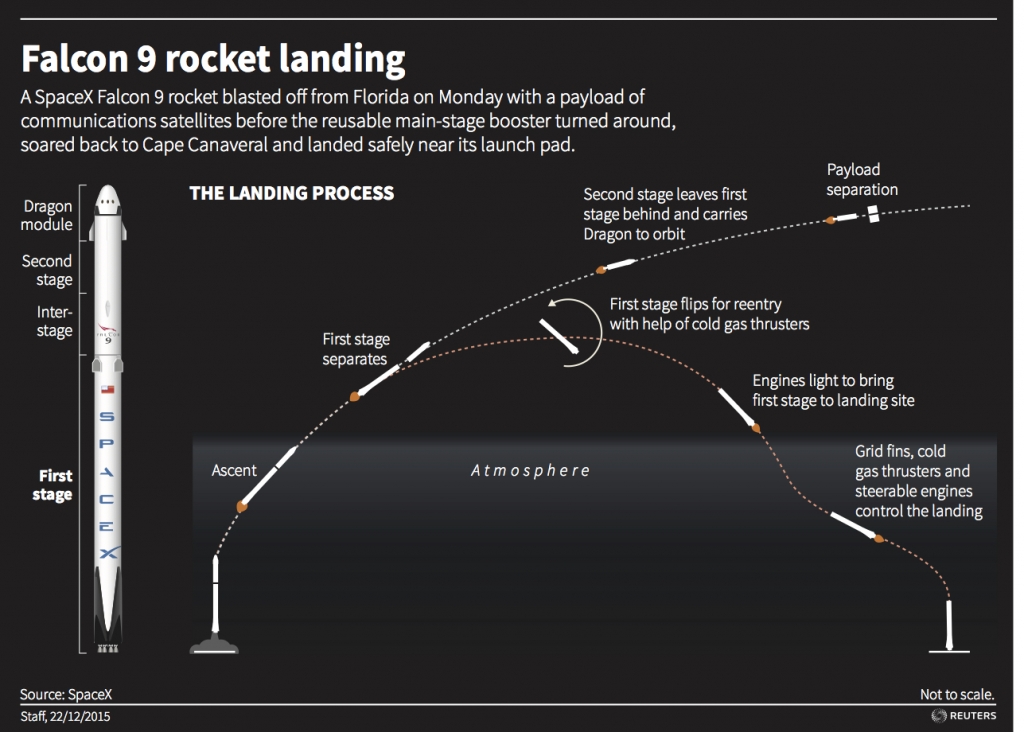 The rocket Musk is hoping will fit the bill is called the Falcon 9. A launch of the Falcon 9 failed back in June, destroying with it a load of supplies destined for the International Space Station. But Monday's successful launch and landing is raising hopes that the dream of a reusable rocket isn't far off.

SpaceX's current version of the Falcon 9 costs around $54 million to make, according to Quartz. But it only costs $200,000 to fuel. If you can reuse a Falcon 9 the way you reuse a 747 airplane — well, you don't need a calculator to know that shooting stuff into space could get a whole lot cheaper.

That's great news for a government agency, NASA, that's constantly hustling to keep Congress from cutting its budget even more than it's already done since the space program's heyday in the late 1960s and early 1970s.

And the Falcon 9 rocket could prove as politically useful for NASA as it would be financially. SpaceX is an American company working on a rocket that would help NASA regain some of its autonomy when it comes to space travel. Since the Space Shuttle program ended in 2011, NASA has had to pay Russia's space agency to carry American astronauts to the ISS aboard Russian Soyuz spacecraft. Those trips cost more than $70 million per astronaut, costing NASA a total of $1.2 billion between 2011 and 2015. Considering NASA's allocated budget for 2015 was $18 billion, those are some very expensive Uber rides.

Let's face it, many US lawmakers and their constituents aren't exactly thrilled by a NASA that once landed on the Moon transforming into an agency that pays Russia billions of dollars to ferry astronauts to space, where they do science-y things that aren't as symbolically exciting as planting an American flag on an extraterrestrial object. Just consider the words of Republican presidential candidate Donald Trump, who, when a 10-year-old boy in New Hampshire asked him about NASA, responded: "You know, in the old days, it was great. Right now, we have bigger problems — you understand that? We've got to fix our potholes. You know, we don't exactly have a lot of money."

Spending significantly less money on the boring but very necessary task of shooting cargo and humans into space would free up NASA resources for the types of projects that do get Congress and the American public excited. (And that presumably get NASA scientists excited, too.)

We saw some of that Space Age thrill this year with NASA's New Horizons mission. That mission to Pluto and its moons took 10 years and cost around $700 million dollars. It collected lots of data that scientists will care about, of course. But it also generated enormous excitement, thanks largely to the dazzling high definition photos of the dwarf planet that NASA distributed through social media.

New Horizons turned into perhaps the biggest science story of 2015. Then, on Dec. 16, Congress released the final version of its spending bill for 2016. It allocated $19.3 billion for NASA — $1.3 billion more than the 2015 budget and $700 million more than the Obama administration had requested for the agency.

Is it a coincidence that NASA got very happy budget news after capturing the world's attention with its Pluto mission? Doubtful.

When you see the Falcon 9 launch and landing, then, you're likely not seeing the death of NASA. You're probably witnessing its future.

You can check out SpaceX's full launch webcast here, or you can skip to the big finale, which you've got to admit, is totally mind-blowing: