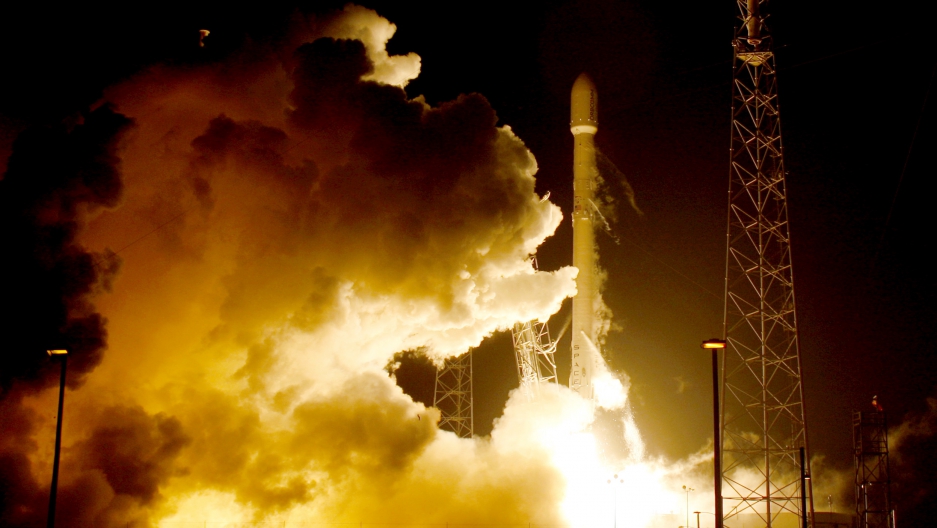 A remodeled version of the SpaceX Falcon 9 rocket lifts off at the Cape Canaveral Air Force Station on the launcher’s first mission since a June failure in Cape Canaveral, Florida, December 21, 2015. The rocket carried a payload of eleven satellites owned by Orbcomm, a New Jersey-based communications company. The first stage returned to land following launch.

The SpaceX employees were celebrating what many consider to be a historic moment for private space exploration.

The company had managed to successfully launch a rocket called Falcon 9 and return it safely back to Earth on Monday night.

Falcon 9, which was carrying 11 satellites, landed in an upright position in Cape Canaveral, Florida.

Scientist Monica Grady says the news of the landing of Falcon 9 makes her very excited. “This means that space exploration for ordinary people is one step closer — and a big step at that,” she says.

Grady, who teaches planetary sciences at the Open University in UK, explains that the fact that the rocket landed safely means that it could be used for future missions.

“This means that we’ll be able to reuse bits of rocket which means prices will come down,” she says, although that might be a few years away.

In addition, she says, this is a step toward making space travel more accessible to ordinary people. “When people first flew across the Atlantic or down to Australia it was only the very wealthy people who could do that. Now anybody can do it,” she says.

This is not the first time that a space rocket has successfully landed upright.

About a month ago a space startup called Blue Origin, founded by Amazon’s Jeff Bezos, managed to safely bring back a smaller rocket from a suborbital flight.

Grady says that Blue Origin’s rocket “went nowhere near as high as the SpaceX Falcon 9 rocket.” But, she adds, it had a capsule designed to take people into space, which makes it an important achievement.

All these private companies investing and experimenting with space travel makes Grady happy. She explains that these companies have taken on what governmental space agencies can’t.

“NASA or the European Space Agency or any other space agency can’t possibly start developing space exploration travel for people because they don’t have sufficient resource,” she says, “whereas private companies do have that resource.”

“The current rivalry between these companies is great,” she adds, “because that’s how progress is made.”