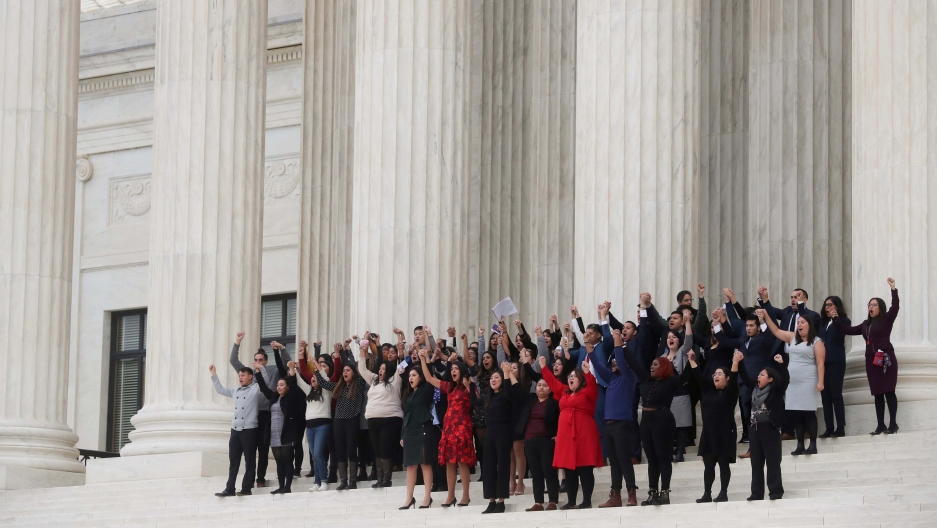 DACA plaintiffs walk arm-in-arm down from the US Supreme Court after justices heard oral arguments in the consolidation of three cases before the court regarding the Trump administration’s bid to end the Deferred Action for Childhood Arrivals (DACA) program in Washington, DC, on Nov. 12, 2019.

Update 6/18/20: In a 5-4 decision, the US Supreme Court ruled against the Trump administration's attempt to cancel Deferred Action for Childhood Arrivals, or DACA. The majority opinion, authored by Chief Justice John Roberts, called the Department of Homeland Security's attempt to end the program "arbitrary and capricious." The ruling allows DACA to stay in place for now, ending some of the uncertainty faced by more than 650,000 undocumented immigrant beneficiaries who were brought to the US as children.

One of the most anticipated rulings of the Supreme Court’s 2019-2020 term concerns the future of Deferred Action for Childhood Arrivals, or DACA. The Obama-era program grants qualified undocumented immigrants who entered the country as minors two-year periods of deportation deferrals and eligibility for work permits. It does not offer a path to citizenship.

Former President Barack Obama’s administration created the program in 2012 in response to the failure of Congress to pass legislation to protect “Dreamers,” as DACA recipients are also known.

The Trump administration rescinded DACA in 2017, prompting multiple lawsuits from supporters of the program who wanted to keep it alive. The Supreme Court heard oral arguments on DACA in November. A decision is due out anytime before the court ends its current term in June.

The crux of the Supreme Court case is whether it was legal for the Trump administration to end DACA. As of June 2019, there were about 660,000 DACA recipients in the US.

Here’s a timeline of the program and the litigation around it.

June 2012: The Obama administration creates the DACA program. In a memo, Homeland Security Secretary Janet Napolitano announced a policy of exercising “prosecutorial discretion” for “certain young people who were brought to this country as children for undocumented immigrants who were brought to the US as children.” The Department of Homeland Security memo defers immigration enforcement action for “for a period of two years, subject to renewal.” To qualify, undocumented immigrants must have come to the US before they were 16; continuously resided in the US for the past five years; be enrolled in school or graduated from high school; and have not been convicted of a felony. DACA recipients are also given work authorization. More than 700,000 people came forward and qualified for the program.

November 2014: In President Barack Obama’s second term, Homeland Security Secretary Jeh Johnson issues a new policy expanding DACA and creating a new program called Deferred Action for Parents of Americans, or DAPA. It would have extended temporary relief to some 4 million undocumented immigrant parents of US citizens and legal permanent residents. Twenty-six states, led by Texas, challenged the policy in federal court. All had Republican governors.

February 2015: A federal district judge in Texas issues a nationwide injunction barring DAPA from taking effect, saying the plaintiffs were likely to prevail. A Fifth Circuit judge later upheld the lower court judge’s decision, paving the way for the case to reach the Supreme Court.

June 2016: An eight-justice Supreme Court ties 4-4 on the case, affirming the Fifth Circuit court’s decision on DAPA and effectively halting the program. The decision casts the fate of DACA recipients — and the 11 million undocumented immigrants residing in the US — as a key issue in the 2016 presidential election.

September 2017: The Trump administration rescinds DACA, saying the Obama administration bypassed Congress in its decision to create the program and that it is illegal. Citing Attorney General Jeff Sessions, Acting Homeland Security Secretary Elaine Duke calls DACA “an open-ended circumvention of immigration laws” that “was an unconstitutional exercise of authority by the executive branch.” Multiple lawsuits are filed around the country challenging the Trump administration’s move. Trump gave Congress until March to find a legislative solution.

January 2018: A federal district court judge in California blocks the Trump administration’s repeal of DACA and requires the program to continue as legal challenges go through the courts. Judges in New York and Washington, DC, later issued similar injunctions. DACA renewals are allowed to continue, but new applicants are no longer allowed to apply.

January 2018: The Congressional battle over the DACA program leads to a three-day government shutdown. Negotiations do not resolve the issue.

Related: DACA recipients at the center of the spending bill debate in Congress

March 2018: A federal district court judge in Maryland departs from other federal court rulings and finds the Trump administration’s rescission of DACA is valid. The ruling is overturned on appeal. The Trump administration later asks the Supreme Court to review the decision. The case touches on whether the federal government can share information it receives from DACA program applicants for immigration enforcement purposes. To date, there is no decision in this case.

May 2018: Texas and six other states file a lawsuit challenging the lawfulness of the DACA program and asking for a preliminary injunction. The case opened a new legal front in the battle over DACA. The judge rejected their injunction request, and the case has been stayed pending a decision from the Supreme Court on the Trump administration’s termination of DACA. Other injunctions remain in place that allow current DACA recipients to renew their statuses, but no new applicants may apply.

January 2019: The fate of DACA recipients becomes central to the longest government shutdown in history. Trump demanded a $5.7 billion fund for a border wall in exchange for temporary protections for “Dreamers.” The shutdown ended with no border wall funding and no legislation on DACA.

June 2019: The Supreme Court agrees to hear cases on the Trump administration’s termination of the DACA program. Three lawsuits were combined into one: Department of Homeland Security, et al., v. Regents of the University of California, et al. Oral arguments are set for November.

November 2019: On Nov. 12, the Supreme Court hears oral arguments on the Trump administration’s termination of the DACA program.

March 2020: Supporters of DACA holders seek the Supreme Court’s permission to file a supplemental brief. The brief states that DACA recipients — especially those who work in the health care industry — are vital in battling the coronavirus pandemic and that the Trump administration’s effort to end DACA should be blocked. The court agreed to consider the brief. A decision in the case is still forthcoming.

June 2020: In a major blow to the Trump administration, the Supreme Court ruled 5-4 that the rescission of DACA in 2017 was "arbitrary and capricious." The ruling allows DACA to continue and provides some relief to the approximately 650,000 undocumented immigrant beneficiaries who were brought to the US as children.

In the majority opinion, Chief Justice John G. Roberts Jr. writes that the Trump administration did not provide enough justification for ending the program. Roberts wrote: "We do not decide whether DACA or its rescission are sound policies .... We address only whether the agency complied with the procedural requirement that it provide a reasoned explanation for its action. Here the agency failed to consider the conspicuous issues of whether to retain forbearance and what if anything to do about the hardship to DACA recipients. That dual failure raises doubts about whether the agency appreciated the scope of its discretion or exercised that discretion in a reasonable manner. The appropriate recourse is therefore to remand to DHS so that it may consider the problem anew."

The Court seems to leave open other ways for the Trump administration to end the program, but it must provide adequate reasoning for doing so.

Meanwhile, in a dissent, Justice Clarence Thomas said the ruling makes way for political battles to be fought within the court rather than the executive and legislative branches. Thomas writes: "Under the auspices of today’s decision, administrations can bind their successors by unlawfully adopting significant legal changes through Executive Branch agency memoranda. Even if the agency lacked authority to effectuate the changes, the changes cannot be undone by the same agency in a successor administration unless the successor provides sufficient policy justifications to the satisfaction of this Court."