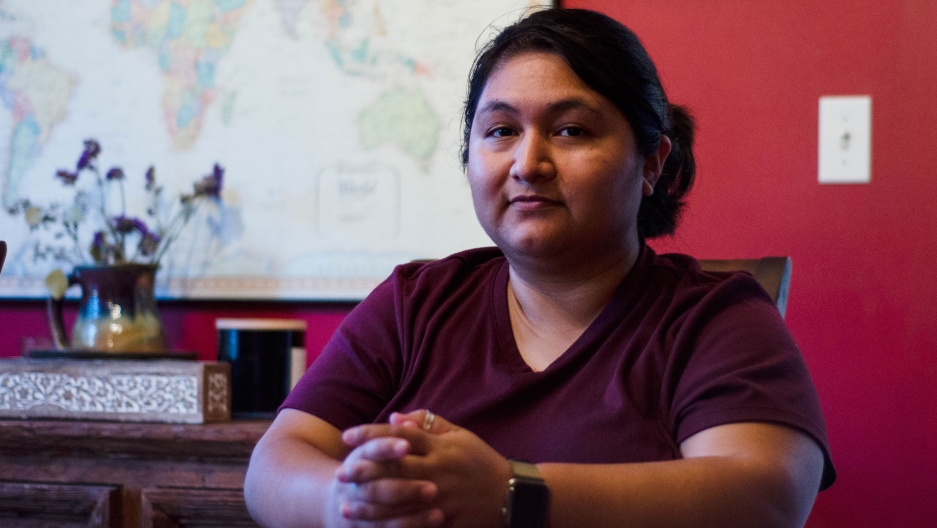 Norma Ramirez, an undocumented immigrant and beneficiary of the DACA program, is suing the Trump administration for rescinding DACA.

Growing up in Las Vegas, Norma Ramírez set her sights on attending an Ivy League college. The daughter of Mexican immigrants, Ramírez excelled at school and thought she had a shot at Harvard or Yale.

But as she was planning her future, her father told her to forget college. Ramírez didn’t have legal status in the United States, he reminded her. At five years old, she had arrived from Mexico without a visa, a country she barely remembered.

The reality of being undocumented in America came crashing down on Ramírez, then a high school senior. Her dreams of a prosperous future tanked. While no federal law prevents undocumented students from attending college, access to financing or scholarships is almost impossible.

Yet today Ramírez is on a path she never thought possible, thanks largely to an Obama-era immigration program known as DACA (Deferred Action for Childhood Arrivals). At age 29, she is a mental health therapist and PhD candidate in clinical psychology at Fuller Theological Seminary in Pasadena, California. She is also one of 11 plaintiffs suing the Trump administration for ending DACA. The US Supreme Court will hear the case on Nov. 12.

“Nowhere in my life, in my narrative, was there ever like, one day, I’m going to sue the president. Nobody ever has that as a dream.”

“Nowhere in my life, in my narrative, was there ever like, one day, I’m going to sue the president,” said Ramírez, who has been a DACA recipient since 2012. “Nobody ever has that as a dream.”

When she thinks about the court challenge ahead — the fact that so many DACA recipients will be watching the outcome closely, pinning their hopes to her and the other plaintiffs’ success — she feels both hopeful and anxious.

“It’s a lot. I [have] started to feel it,” Ramírez said. “I feel kind of scared, because no one like me should be in the Supreme Court.”

The case, Regents of the University of California, et al. v. United States Department of Homeland Security, et al., hinges on whether the Trump administration acted lawfully in ending the DACA program in September 2017. The outcome could affect hundreds of thousands of people who are often called “Dreamers” — many of whom, like Ramírez, were brought to the country without proper authorization as children.

US President Barack Obama created the DACA program with an executive order in 2012. It gave recipients relief from deportation and permission to work for two years at a time. The status was renewable but provided no path to citizenship. It helped a generation of undocumented young adults go to college and get jobs, health insurance and driver’s licenses.

On the campaign trail, US President Donald Trump repeatedly promised to end DACA and said President Obama’s action was an abuse of power. In rescinding the program in 2017, then-Attorney General Jeff Sessions said it “denied jobs to hundreds of thousands of Americans by allowing those same illegal aliens to take those jobs.” Since then, lower courts have kept DACA alive temporarily. Activists, college presidents and business leaders nationwide have voiced their support for DACA recipients.

Related: DACA recipients won't go back into the shadows quietly

The plaintiffs in the Supreme Court case argue that the Trump administration did not follow the correct process before ending DACA. The government contends it did, and that it did not need to seek public comments or publish notice before ending the program. The future for DACA may be unclear no matter which way the justices rule. 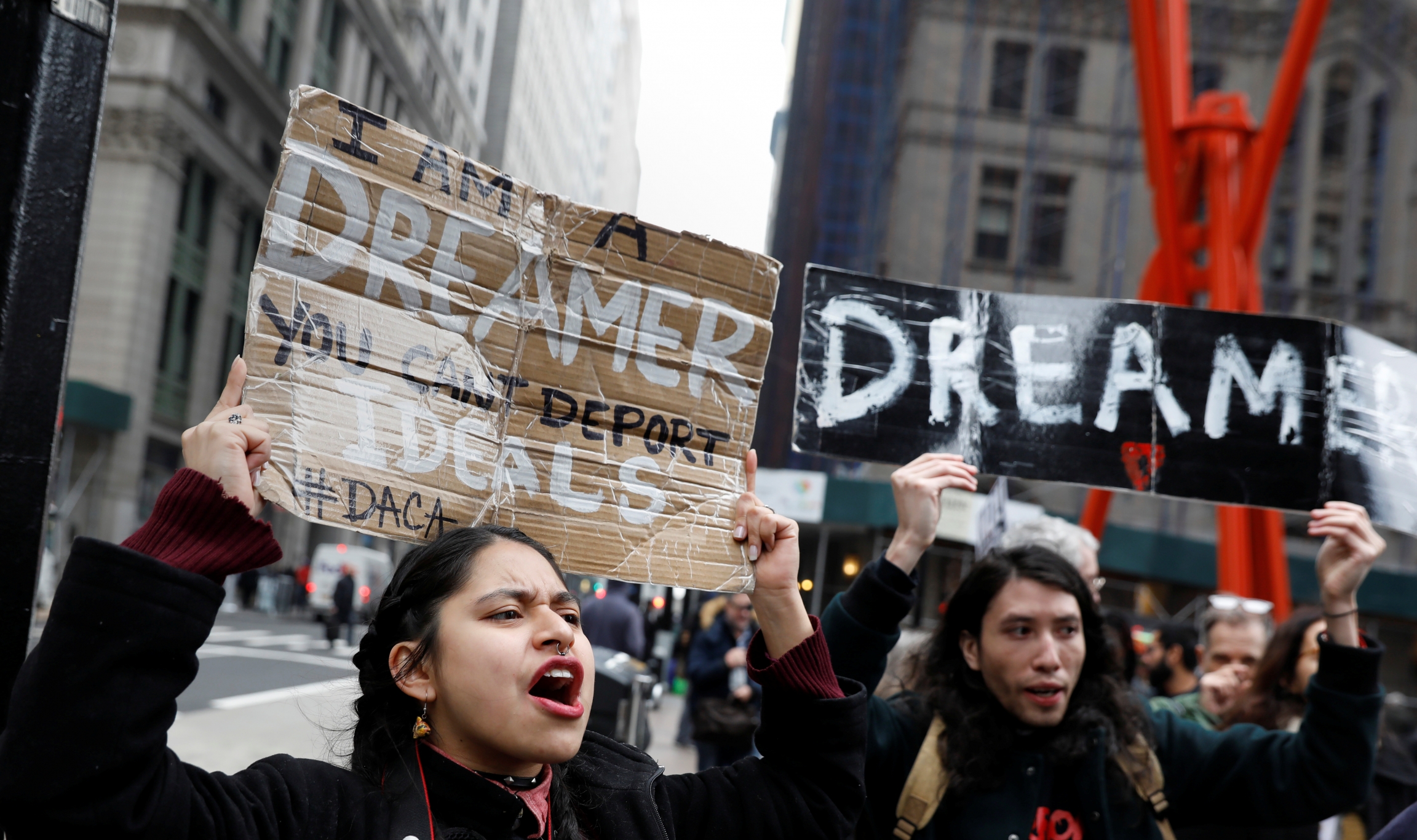 Activists and DACA recipients march up Broadway during the start of their "Walk to Stay Home," a five-day, 250-mile walk from New York to Washington, D.C., to demand that Congress pass a "clean" Dream Act, in Manhattan, New York, February 15, 2018.

‘You live a very suspended life’

Ramírez has never been an activist on immigration issues. But she was thrust into the spotlight when she agreed to be a plaintiff in this case. She agreed to take part, she said, because she believes “our immigration status shouldn’t matter.”

Life as a Dreamer is hard, she said: “You live a very suspended life. You can’t plan a month or a year in advance.”

The other plaintiffs range from a third-year law student at the University of California, Los Angeles, preparing to take the California bar exam to a middle school teacher.

In many ways, Ramírez’s immigration status has altered the course of her life. She said her career path in clinical psychology was inspired by her own mental health struggles after she realized her immigration status meant she would face challenges attending college.

“All of a sudden, all the things I had worked for, there was no point,” she said. “That was a really hard time.” “I mean, it breaks you, and then you have to find a way to still keep going.”

Ramírez also realized that other members of her Latinx community — a group Trump routinely targets — might also need help overcoming fears, anxieties and even anger.

“I see it within my family the way we were broken apart and how we’re trying to figure out how to come together,” Ramírez said.

Related: DACA recipients saw their mental health improve. Now, advocates fear its end will have the opposite effect

She went to therapy herself but had some awful experiences. One therapist told her she could relieve her anxieties by simply going back to Mexico to attend college. It became clear to Ramírez that therapists needed to be more sensitive to the needs of the communities they served.

So Ramírez applied to study clinical psychology at Fuller Theological Seminary in Pasadena, California. And with DACA, she could study and work without worrying about her immigration status.

“My hope is to be able to provide mental health resources, primarily therapy services at a low cost to Latino undocumented families,” Ramírez said.

After Trump was elected, and immigration fears spiked in the Latinx community, mental health therapy became even more necessary for that population, she said. Ramírez is now working on a project that aims to measure the mental health needs of immigrants in the Los Angeles area.

“Our communities need more folks that are well informed about mental health,” said Lisseth Rojas Flores, a leader in the field of trauma and mental health therapy, and a professor at Fuller Theological Seminary. “[Ramírez is] learning, as a future psychologist, the tools to be able to provide support for our communities.”

“Norma is a very brave and inspiring woman,” she added.

The cost of ending DACA

The case the Supreme Court will hear is a consolidation of three cases brought in California, New York and the District of Columbia. The high court will consider whether the Department of Homeland Security followed the Administrative Procedure Act when it ended the immigration program.

One of the lead attorneys for the plaintiffs in the California case, Mark Rosenbaum of Public Counsel, a public interest law firm, said DACA was ended unlawfully.

“Rule number one is that reasoned decision making underlies the decision, and rule number two is that the president has to consider cost. In this case neither principle was followed.”

“Any president is free to change the policy of a prior administration, but there are rules to follow,” Rosenbaum said. “Rule number one is that reasoned decision-making underlies the decision, and rule number two is that the president has to consider cost. In this case neither principle was followed.”

In ending DACA, he said, the Trump administration failed to consider the economic cost to communities that stood to lose the labor of some 700,000 DACA recipients who would lose their work permits if the program ended. He points to the California plaintiffs, such as Ramírez.

“A lawyer, a special education teacher, a teacher in a hard-to-staff school, a social worker and a therapist,” he said. “They didn't even show they have considered this cost to the community of [them] losing their jobs.”

The Department of Homeland Security did not respond to The World’s request for comment.

In a legal brief to the Supreme Court, the Justice Department said DHS “correctly, and at a minimum reasonably, concluded that DACA is unlawful.” It further argued none of its actions were “arbitrary or capricious,” as the plaintiffs contend and lower court judges agreed.

With weeks to go before the hearing, Ramírez is doing her best to take time for herself. Hiking is one stress-relief remedy she favors. On a recent fall morning, she met her friend, Sonia Luginbuhl, at the base of a canyon a short drive from her Pasadena home. Luginbuhl will accompany Ramírez to Washington, D.C., next month.

Ramírez shuns the idea that she is a good and deserving immigrant, someone who should be able to stay at the expense of others. In deals that have involved DACA in the past, further enforcement and stepped up deportations have been the bargaining chips. Ramírez tells Luginbuhl she is conflicted about the way the movement that won DACA has made people like her parents the bad guys.

“DACA became such a big thing that everyone’s like, ‘DACA, DACA.’ What about people that don’t have DACA? What about our parents? They’re criminalized,” Ramírez told Luginbuhl.

“No,” she continued, “my parents are the reason I am where I am, and they need to be respected.”

A decision is not expected until next spring or early summer. Ramírez said she simply hopes “something good” will come from the case.

Editor's Note: A detail from this story has been removed to protect one of the people involved in the case.