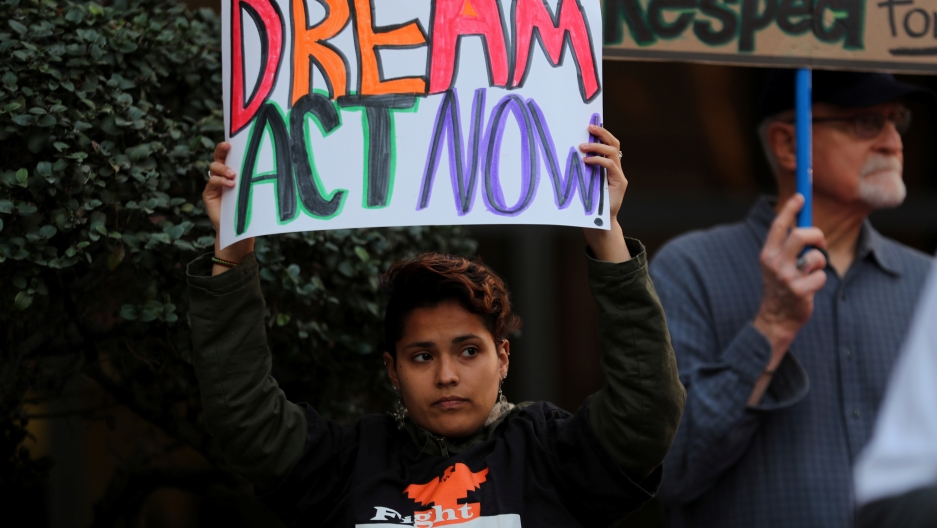 A women demanding action by the federal government on the Deferred Action for Childhood Arrivals (DACA) protests with a group in downtown San Diego.

Less than two weeks from now, the federal government could shut down unless Congress can pass a spending bill. But the status of undocumented immigrants brought to the US as children has once again become a point of contention.

The Trump administration ended DACA, or the Deferred Action for Childhood Arrivals program, on Sept. 5. Since then, immigration advocates have been pushing Congress to pass a bill with protections for DACA recipients.

But President Donald Trump said over the weekend that any immigration deal would have to include plans for a border wall with Mexico.

Several Democrats, including Sens. Elizabeth Warren, Kamala Harris and Bernie Sanders have promised to vote “no” on any version of a spending bill that doesn’t protect DACA recipients. But the party is divided — some Democratic members of Congress don’t want to risk a government shutdown.

“When it comes to the numbers game, Republicans need Democratic support in the Senate to actually pass any kind of spending bill,” says Sanaa Abrar, policy and advocacy manager with the immigrant advocacy group, United We Dream.

The organization is trying to convince politicians on both sides of the aisle to demand a spending bill that includes protections for DACA recipients, despite concerns about the 2018 midterm elections.

You can hear more about the spending bill debate in Congress above.