US Secretary of State Mike Pompeo took a lightning trip abroad Wednesday, spending less than a day in Israel meeting with leaders. The unofficial focus of his talks with Prime Minister Benjamin Netanyahu was Israel’s plans to annex large parts of the West Bank.

In the months leading up to the visit, Netanyahu said the plans were subject to US agreement, while Pompeo said it's up to the Israelis to decide. Both sides are pushing to move forward on the issue. But reports this week suggested the goal of Pompeo’s trip was to caution Israeli leadership against moving too quickly.

Most of the world is not aligned on the annexation. Governments in Europe and the Arab world are solidly against it, with some European leaders saying they might consider imposing economic sanctions on Israel if it moves ahead with annexation. Meanwhile, Palestinians, some 2.8 million of whom live in the West Bank, consider it the heartland of their future independent state.

A key territory included in the plan for annexation is the Jordan Valley, a long and narrow strip of land that comprises about a third of the West Bank and is home to roughly 8,000 Jews and 52,000 Palestinians, of whom 4,400 reside in the part of the Jordan Valley that Israel intends to annex, according to separate figures from Israeli and Palestinian official surveys.

As Israeli plans for annexation have yet to be fully drawn up, it remains unclear what status will be granted to the Palestinians living there today once implemented.

As Israeli plans for annexation have yet to be fully drawn up, it remains unclear what status will be granted to the Palestinians living there today once implemented.

At approximately 1,300 feet below sea level, the Jordan Valley is the lowest valley on earth. It is bisected by the famous Jordan River, which serves as a natural dividing line between Jordan and the West Bank.

Its fertile soil has made this place an agricultural breadbasket going back thousands of years. The Palestinian population living in this area is sparse, spread out over dozens of communities of shepherds and small villages.

Noor Ebbaya is a 43-year-old Palestinian mother of seven who lives in the village of Fasayil. It’s right in the center of the Jordan Valley, near the Palestinian city of Jericho. On an overcast, warm afternoon in late February, she watched over her flock of sheep on a rocky hilltop while her husband prayed in the nearby mosque.

“When I was growing up, my family raised sheep here,” she said. “And after I got married, my husband and I now are raising sheep.” 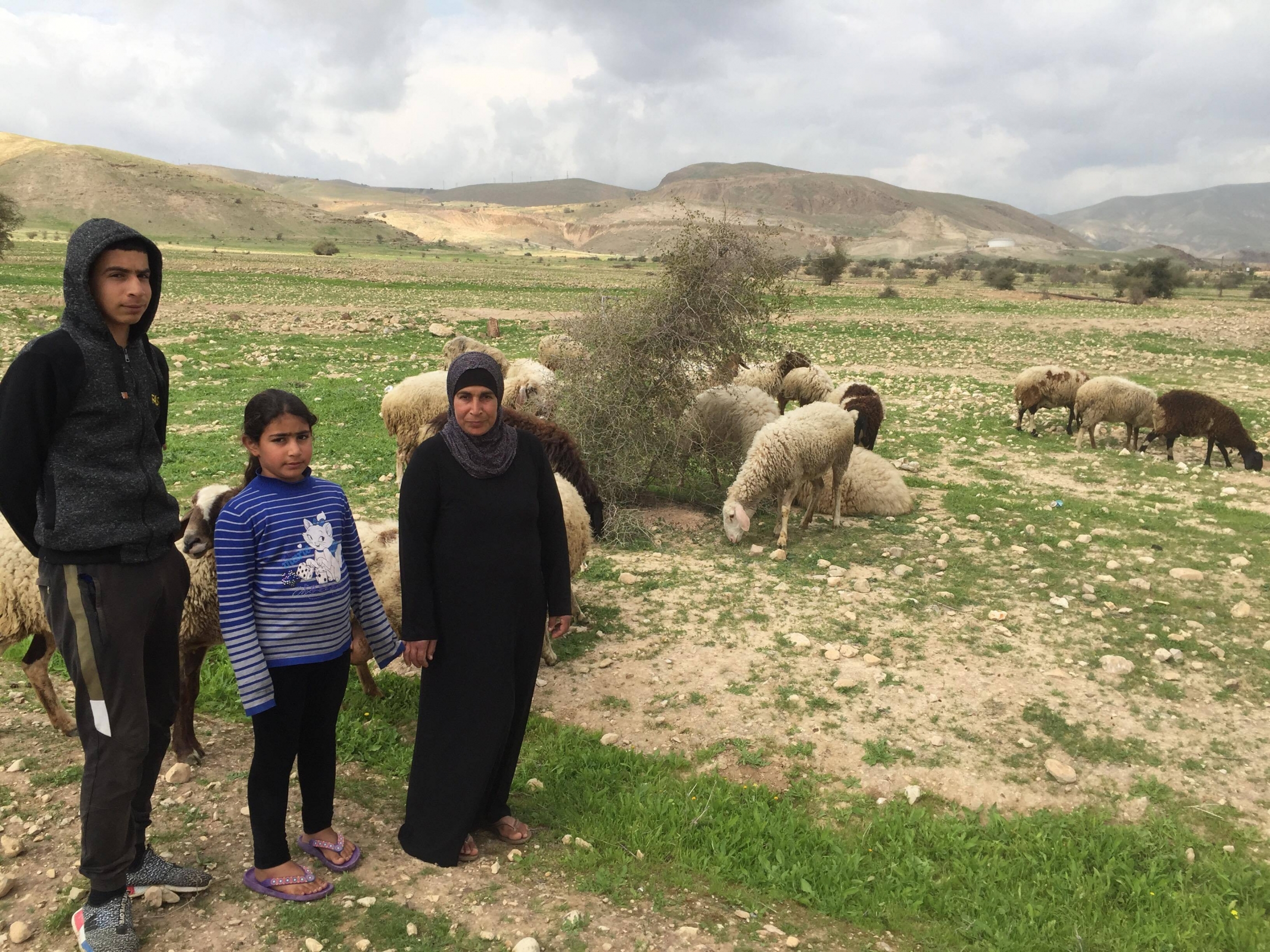 Iyad Ebbayat, left, his younger sister, and his mother, Noor Ebbayat with their sheep in the Palestinian village of Fasayil.

But the lack of infrastructure, limited job opportunities and low wages have taken a heavy toll on Ebbayat and her family, along with hundreds of other families living in the area. “Our life here in Fasayil is hell,” she said. “In the summer, there’s no electricity and hardly any water. Our situation is very difficult.”

Since 1994, roughly 90% of the Jordan Valley has been under full Israeli control. Under the Oslo Accords, signed between Israel and the Palestinians, the West Bank was divided into three separate territories: areas A, B and C.

Fasayil and most of the Jordan Valley are classified as Israeli-controlled area C. But parts of it are located in area B, which is under Palestinian administrative control. But the village of Fasayil straddles two zones. Half of it is on area C, the Israeli administered land, while the other falls under the Palestinian Authority.

Ibrahim Ebbayat is the head of the village council in Fasayil. He explains that new construction in the village is essentially banned by Israel. And it gets worse.

“There are currently more than 60 house demolition orders,” he said. He pulls out a letter to show that includes his own home.

Despite reporting to the Palestinian Authority, Ebbayat says he doesn’t care who officially rules over the area.

“We don’t care what government is in charge, we will stay here. The important thing for the people of Fasayil is to remain on our land. Palestinian identity is embedded in our hearts.”

“We don’t care what government is in charge, we will stay here,” he said. “The important thing for the people of Fasayil is to remain on our land. Palestinian identity is embedded in our hearts.”

Most Palestinians living in the Jordan Valley work in Israeli settlements. A few minutes’ drive from Fasayil is the settlement of Nativ Hagdud. Reuven Cohen, 69, has been living there for 45 years. He’s a farmer who runs a packaging factory that employs 30 Palestinians.

Cohen says he and his wife, Mimi, came to the Jordan Valley because of ideological reasons regarding security. He explains that at the time, the Israeli government told them they needed to be here to help defend Israel from the Arabs, essentially helping establish a line of defense from Jordan in the aftermath of the 1973 Yom Kippur war.

But times have changed. Now, right-wing Israelis — including many of Cohen’s neighbors in West Bank settlements — support annexing the Jordan Valley and making it part of the State of Israel.

Despite that support from Israeli citizens, the current security threat on Israel’s eastern border may not require it to resort to annexation, according to Oded Eran, a former Israeli ambassador to Jordan and chief peace negotiator with the Palestinians during the Clinton administration.

“It has been quiet for quite a number of years,” said Eran, now a senior researcher at the Institute for National Security Studies in Israel (INSS). “And assuming that the current regime continues to rule in Jordan for years to come, from the security point of view, I’m not so sure that this is a priority for the Israeli government.”

“There are arrangements that fall short of annexation. It’s absolutely unnecessary.”

“There are arrangements that fall short of annexation,” he said. “It’s absolutely unnecessary.”

Palestinian leaders see Israel imposing its sovereignty over the West Bank, including the Jordan Valley, not only unnecessary but as a red line that must not be crossed.

"We have informed the relevant international parties, including the American and the Israeli governments, that we will not stand hand-cuffed if Israel announces the annexation of any part of our land,” Palestinian President Mahmoud Abbas said last month. “We would regard agreements with Israel and the United States completely null and void."

Opponents of Israeli annexation say it would just bring more violence. On Tuesday, in a different part of the West Bank, a 21-year-old Israeli soldier was killed during a raid.

It was the first fatality for the Israeli military this year. Prime Minister Netanyahu vowed that "Israel's long arm will reach the terrorist and hold him accountable." The Palestinian militant group Hamas praised the killing, saying that annexation will be met with more violent resistance.

Cohen says all the talk of annexation is simply empty political rhetoric.

“Politicians are politicians. Can you believe a politician?” Cohen said. “I remember from the movie ‘The Good, the Bad and the Ugly,’ the guy says, ‘If you want to shoot, shoot.’ If you want to talk, talk. You know, to talk doesn’t cost any money. So I don’t know.”

For Cohen, what is truly important is a peaceful resolution to the conflict. He says he fought in a war in 1973, and his son has fought in a war too. So, enough already, he says.

“I believe in peace. I want to make peace with the Arabs. Really, I want to emphasize this. I don’t want to control their life.”

“I hope that my grandson will not be in the war,” Cohen said. “I believe in peace. I want to make peace with the Arabs. Really, I want to emphasize this. I don’t want to control their life. I prefer not to do it. I hope that in the future, but probably it won’t be in my future.”

Cohen isn’t the only one worried about the future. Back in the Palestinian village of Fasayil, Ebbayat’s oldest son, 18-year-old Iyad, joins his mother to help look after the sheep. He left school two years ago to help provide for the family.

“Work is my future,” Iyad said. “To grow peppers in the fields of Fasayil. But I know that it’s pointless.”

His mother explained there is no motivation for the local youth to stay in school. She says they’ve seen how educated teens all end up working for Israeli farmers in the area.

“So why study, they say,” she said. “Why worry about getting an education? They’ll just end up working in the settlements anyway.”

When asked what he dreams to become one day, Iyad simply laughed. “Nothing," he said. "I have no dreams.”