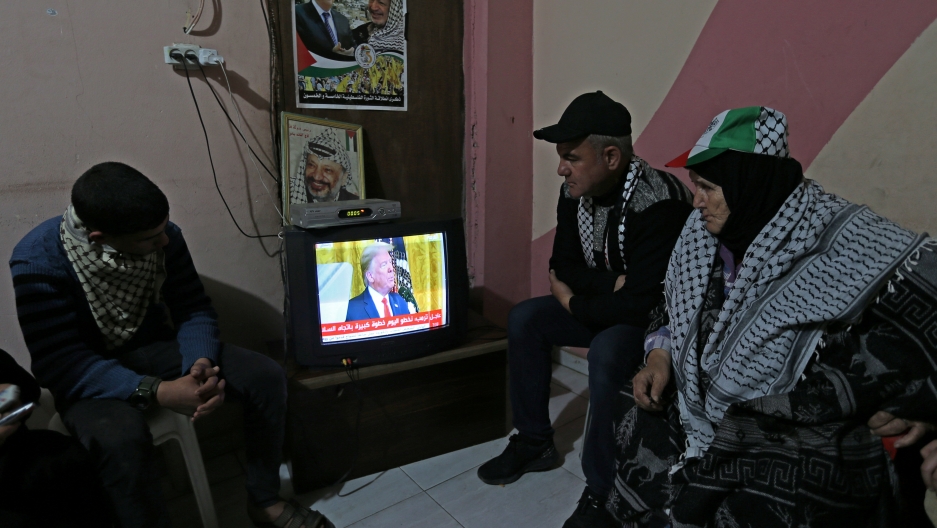 Palestinians watch a television broadcasting the announcement of a Middle East peace plan by US President Donald Trump, in the southern Gaza Strip on Jan. 28, 2020.

US President Donald Trump on Tuesday proposed the creation of a Palestinian state with a capital in eastern Jerusalem, dependent on Palestinians taking steps to become self-governing, in an attempt to achieve a peace breakthrough in a decades-long conflict with Israel.

Trump announced the plan, billed as the "deal of the century," in Washington, DC, alongside Israeli Prime Minister Benjamin Netanyahu. Under its terms, the United States will recognize Israeli settlements in the occupied West Bank. In exchange, Israel would agree to accept a four-year freeze on new settlement activity while Palestinian statehood is negotiated.

Missing from the announcement, however, were Palestinians — who preemptively rejected the proposal, citing pro-Israel bias.

A copy of the 80-page plan released by the White House detailed how the plan might work. Among its key points: Israel would be allowed to annex the majority of Israeli settlements, which have been declared illegal under international law; the Jordan Valley, which comprises about one-third of the West Bank’s territory, would be recognized as a part of Israel; Jerusalem would be seen as the “undivided” capital of Israel, while the Palestinians will have their capital in eastern Jerusalem, which includes the outer suburbs of the municipal boundaries, excluding the old city; and Palestinians would be offered a path to statehood but with no army or armed militias, and with Israeli security control on its borders.

This is what a future State of Palestine can look like, with a capital in parts of East Jerusalem. pic.twitter.com/39vw3pPrAL

“Today, Israel takes a big step towards peace,” Trump said in his announcement. “I was not elected to do small things or shy away from big problems.”

Palestinian President Mahmoud Abbas, who was not present at the announcement and did not participate in the negotiations, addressed Trump afterward: "Trump, Jerusalem is not for sale. Our rights are not for sale. Your conspiracy deal will not pass."

Abbas said that in unveiling the peace plan, "Trump and Netanyahu declared the slap of the century, not the deal. And we will respond with slaps." He stressed that the position of the Palestinian leadership has not changed. "We say a thousand times over: No, no, no."

Nour Odeh is a Palestinian political analyst in the West Bank, in Ramallah. She spoke to The World’s Marco Werman on Monday prior to the plan’s unveiling.

Marco Werman: What do you expect to hear in Trump's announcement?

Nour Odeh: We will basically expect to hear the perfect dream of the Israeli settler movement coming to life, an okay for annexation, which is a crime under international law, a complete endorsement of the Israeli right-wing agenda of abandoning the two-state formula of offering Palestinians some sort of farcical self-rule over populated cities and towns while Israel maintains its permanent control over their lives, over their borders, over their skies, just as it is now, as an occupying power. And that explains why Palestinians have already said that the Trump team has excluded not just the Palestinian leadership, but the Palestinian narrative and the Palestinian rights from this process, which has taken three years.

Two years ago, the Palestinians did cut themselves off from direct contact with Washington. So they've not been involved in hammering out any details of this plan. Will this plan essentially be foisted on the Palestinians without any input If the parties approve it?

Well, I mean, what parties? If Israel and the US are negotiating about bilateral relations, it would be fine. But to think that you can impose permanent surrender on an entire nation is absolutely outrageous. And that's basically what Trump and Netanyahu think they can do. The fact is, the team that worked on this plan never had any interest in hearing the Palestinian narrative.

Can you imagine a Palestinian state as a series of disconnected islands in the West Bank that are demilitarized?

Of course not. And then the issue is not whether the Palestinian state will be militarized or not. Believe me, that is the least of the Palestinian people's concerns. The issue is whether the state is viable. What we've heard so far is Mickey Mouse states, isolated islands of population centers. So why call it the peace plan? Why not call it something else? Call it what it is. It's a scam.

Palestinian leaders have condemned this plan. Palestinian factions in Gaza, in the West Bank, are calling for a day of rage when the plan is presented. But if you ask the average Palestinian in the street about it, what is their take? What's their sentiment towards this deal?

Palestinians overwhelmingly feel disappointed, not necessarily by the American administration. This is a very politically astute population. They're very aware of where Trump stands. So they're not surprised that he's endorsing the Israeli settlement agenda. This is about a nation that has been trying and struggling to get its freedom for over 100 years. And now you have a bully in the White House who says, "Well, no, that's off the table and you're going to get the leftovers. You have to live with that. Otherwise, I'm going to smash you into submission." That's basically how Palestinians view it. And it is enraging in all aspects.

Related: Veteran Palestinian negotiator Hanan Ashrawi is denied a visa to the US

I know Palestinians are looking for support from Arab leaders in the region. But we haven't heard much resistance from Arab leaders to this impending plan. King Abdullah of Jordan will be involved in how the deal is enacted. King Abdullah said this: "Our position is very clear and it is clear to the world." So tell us what is his position and how are other surrounding Arab nations viewing this deal?

He said it's a no that is known to the rest of the world. King Abdullah is in almost an impossible position. And you have a historic relationship between Jordan and Palestine. The king of Jordan cannot afford to be seen as party to the permanent occupation and annexation of Palestine. He cannot be seen as abandoning Jerusalem because Jordan has guardianship over the holy sites in Jerusalem. The legitimacy of the monarchy in Jordan hinges on its very clear, pro-Palestine position in its defense of its role in Jerusalem. And it cannot have that position and support what Trump is proposing. At the same time, these things are simply incompatible.