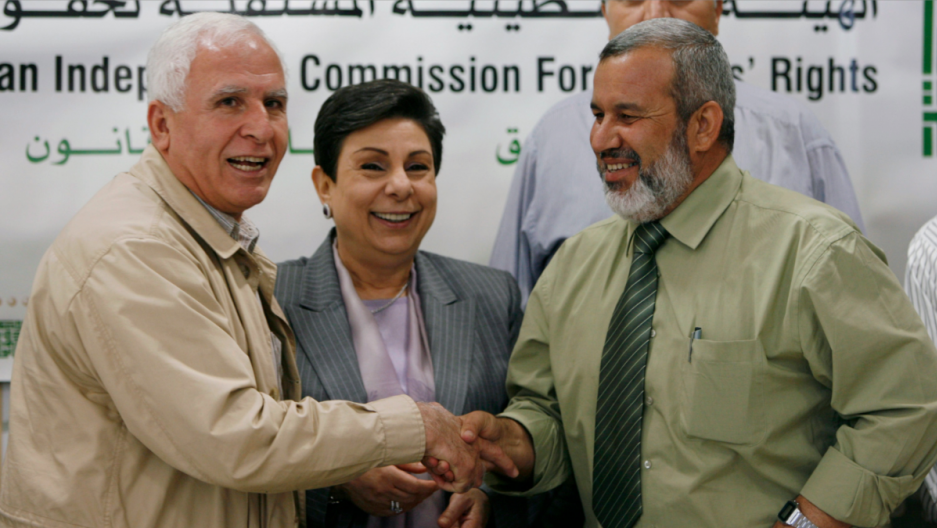 Palestinian parliament members (from left to right) Azam al-Ahmad of Fatah, Hanan Ashrawi and Hatem Qafesha from Hamas, shake hands during a meeting in the West Bank city of Ramallah on July 12, 2007.

For decades, Hanan Ashrawi has been a high profile figure in Palestinian politics. As an executive committee member of the Palestine Liberation Organization, she's negotiated with United States secretaries of state and met with Democratic and Republican US presidents.

This week, Ashrawi’s application for a US visa was denied for the first time. Ashrawi says she viewed the denial as retaliation for her criticism of Israel and the Trump administration’s policy toward Palestinians.

Ashrawi says US officials didn't offer a reason for rejecting her request. The World reached out to the US State Department for a comment on the denial of Ashrawi’s US visa. A spokesperson responded that visa records are confidential under US law, therefore, the State Department cannot discuss the details of individual visa cases. US law does not authorize the refusal of visas based solely on political statements or views if those statements or views would be lawful in the United States.

Hanan Ashrawi: After they asked for all sorts of details and minute questions about the last 15 years of my life and where I've been, then they asked for a new itinerary and when we tried to get it to them they said: "Never mind, the visa application has been rejected."

Marco Werman: You've applied for a US visa before, right?

"... denying me a visa is nothing other than being symptomatic of a very petty approach to politics."

Yes, I studied in the US, I travel there every year. I join negotiations in Washington. This is the first time this has happened anywhere. This kind of rejection is bizarre because it comes in the context, actually, of a very vicious attack against the Palestinian leadership by the Trump administration and, of course, a total assault on all the core issues that are the basis of any negotiations. So compared to what they have done to Jerusalem and the refugees and the two-state solution, denying me a visa is nothing other than being symptomatic of a very petty approach to politics.

Well, despite that aggressive approach to the Palestinian people, the Trump administration's Middle East envoy Jason Greenblatt wrote on Twitter in February to say that you, Hanan Ashrawi, had an open invitation to DC. Have you reached out to him?

Yeah, he said that I have an open invitation, but without the visa, it would be very difficult to get to the White House. They've really smashed the negotiating table to smithereens. 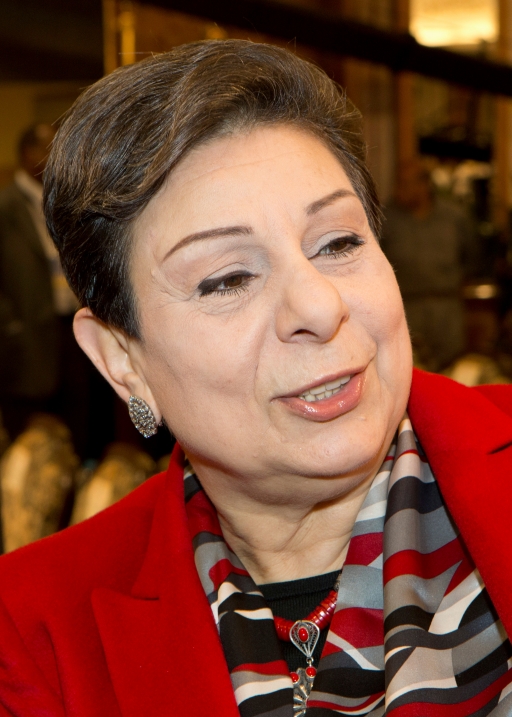 How will this inability to travel to the US impact you both politically and personally?

Politically, of course, I won't be able to attend many meetings because I am on [the] board of several institutions in the US. Of course, we also meet with Congress and so on. This is one way of having dialogue that is candid, that is honest, that is direct.

This separation of families has been symptomatic of the occupation all along and now the US is a part of that as well.

But at the same time, something that really hurts me is the fact that I have grandchildren in the States. I have my daughter and her husband and family, I have my sister, I have nephews and nieces. My daughters lost their IDs because Israel decided to cancel their Jerusalem IDs, so they had to live outside. Now [they] are not allowing me to go to the States to see my daughters.

I guess we'll have to look for a third place to see each other. This separation of families has been symptomatic of the occupation all along and now the US is a part of that as well.