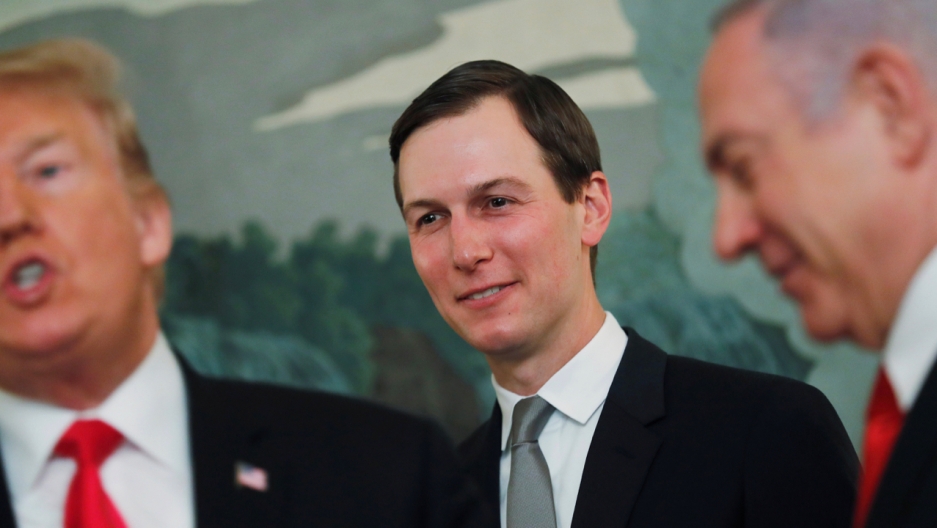 It’s what American presidents do.

For decades, US presidents to one extent or another have stepped into an active role as Middle East peace broker in an attempt to help secure an enduring diplomatic deal between Israel and the Palestinians.

Related: New leak: Jared Kushner says there may be ‘no solution’ to the Israeli-Palestinian conflict

Now, it’s Donald Trump’s turn to try pulling off a “deal of the century” between Israelis and Palestinians.

Some experts say the Trump plan might never see the light of day; others see its chances of success as slim to none.

Taking the lead is President Trump’s son-in-law and senior adviser, Jared Kushner, who’s been mostly tight-lipped about what is in his peace plan for the Israeli-Palestinian conflict.

At a recent talk in Washington, however, Kushner talked about his peace plan, calling it “an operational document that shows what we think is possible.”

Kushner said that includes “how the people can live together, how security could work, how interaction can work and really how do you try to form the outline about what a brighter future could be.”

The details of the Trump-Kushner plan are still not clear. But there’s one big thing that sets this new approach apart from those of previous presidents: Trump appears to be the first US president in many years to have given up on the goal of Palestinian statehood.

Even so, the administration says this is a good deal for the Palestinians.

On her last day at the United Nations, Trump’s ambassador Nikki Haley said “both sides would benefit greatly from a peace agreement. But the Palestinians would benefit more, and the Israelis would risk more.”

The Kushner peace plan is reportedly going to be released in June, after the Islamic holy month of Ramadan. That schedule would also give Israeli Prime Minister Benjamin Netanyahu enough time to put together a new right-wing coalition government. Netanyahu won last month’s national election in Israel and will soon become the country’s longest-serving prime minister.

From what Palestinian leaders have said, the Kushner plan seems like a nonstarter.

“The whole system is to try to push us to surrender. ... This [is] a financial blackmail, which we reject."

“The whole system is to try to push us to surrender,” Shtayyeh said. "This [is] a financial blackmail, which we reject."

Serious negotiations between Israel and the Palestinian diplomats have been on hold for several years.

The Trump administration has done a lot to poison the atmosphere, says Hussein Ibish of the Arab Gulf States Institute in Washington. Last year, Trump reversed decades of US policy and decided to move the US embassy to Jerusalem. His administration has cut off US funding for the Palestinians, closed the office of the Palestine Liberation Organization in Washington and ended US dialogue with Palestinian leaders.

Ibish says Kushner and his team appear to be offering Palestinians far less than what they’ve been seeking for decades.

“They’re treating the Palestinian national movement as a bankrupt real estate venture to be liquidated at political pennies on the national dollar. ... [Palestinians are] not going to get the things they want, like independence, freedom, statehood or citizenship.”

“They’re treating the Palestinian national movement as a bankrupt real estate venture to be liquidated at political pennies on the national dollar,” Ibish says. “[Palestinians are] not going to get the things they want, like independence, freedom, statehood or citizenship.”

“What they can have is an economic incentive package, and they will be told that their lives will improve, as long as you don’t mind living without rights, citizenship and a vote.”

Kushner is reportedly depending on Arab governments, including Saudi Arabia, to finance the peace plan by providing economic aid to the Palestinians.

But Hussein Ibish says that is a fantasy.

“There’s every indication that Saudi Arabia is not going to pay for this,” he says.

Neither are the Saudis going to push the Kushner plan diplomatically, Ibish adds, “because they are sure that it is a failed and losing proposition that won’t go anywhere.”

Ibish worries that the real purpose of Trump’s peace plan is to present something so objectionable to Palestinian leaders that they feel forced to reject it.

“What we’re looking at here is the Middle East version of the Trump approach to Obamacare. It’s ‘repeal and replace,’ with the emphasis on repeal."

“What we’re looking at here is the Middle East version of the Trump approach to Obamacare. It’s ‘repeal and replace,’ with the emphasis on repeal,” he says.

The idea here, Ibish says, is to totally destroy the existing peace framework based on the two-state solution as spelled out in the Olso Accords of the early 1990s.

“They’re trying to do so much damage to that, in terms of facts on the ground … that no future US administration can come in and resurrect it.”

“It’s hard, given this administration’s track record, to see any way in which this succeeds."

Michael Koplow of the Israel Policy Forum is also skeptical about Kushner’s plan.

“It’s hard, given this administration’s track record, to see any way in which this succeeds,” Koplow says.

“This White House believes land for peace has not worked. They tend to view the Palestinians as not being great partners. And they tend to accept Israel’s most maximalist demands regarding security.”

Trump is still popular with the Israeli public, especially with those on the political right. And Koplow says this president’s vision seems to be in sync with Benjamin Netanyahu. The Israeli prime minister has talked about giving the Palestinians control over parts of the West Bank one day, but much less than an independent state.

But Koplow says it is also hard to find Israelis who are enthusiastic about the Trump-Kushner peace plan.

“A lot of the folks on the Israeli right have said, ‘Thank you, President Trump. We appreciate what you’ve done for us. But we don’t want to see any peace plan from you. We’re not interested.’”

“A lot of the folks on the Israeli right have said, ‘Thank you, President Trump. We appreciate what you’ve done for us. But we don’t want to see any peace plan from you. We’re not interested.’”

Koplow says that’s because Israelis on the right are in no mood for compromises with the Palestinians, which Kushner has said will be necessary for his peace plan to work.

With such a toxic political environment and such grim prospects for success, some experts still doubt the Trump-Kushner plan will ever be formally presented. Numerous deadlines for releasing it have come and gone. And maybe that’s not such a bad thing, says Robert Satloff of the Washington Institute for Near East Policy.

At this point, Trump needs to ask Kushner one simple question about his proposal for a “deal of the century:”

“Answer me truthfully, Is it a winner? If not, let’s focus on something else,” Satloff says.