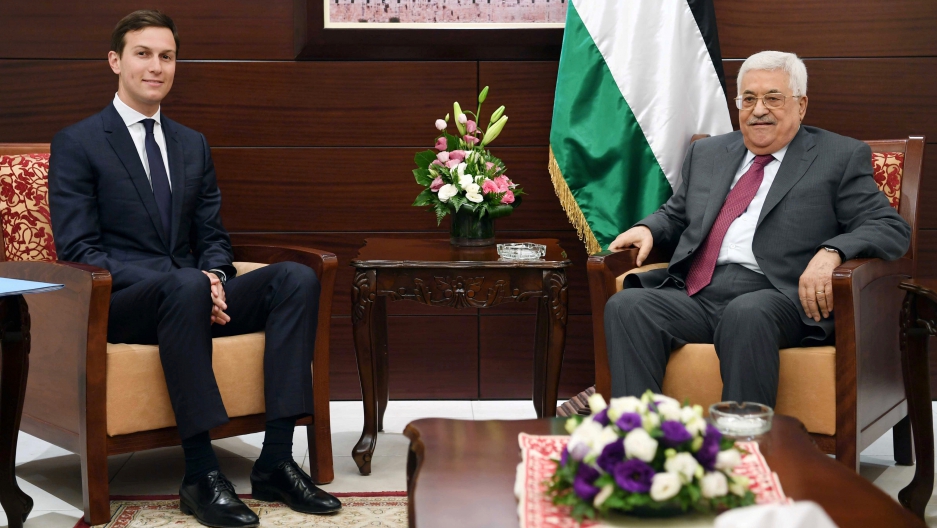 Forget the seven deadly sins. In the universe of President Donald Trump, there is but a single deed more grievous than all the others.

Talking out of school — so to speak — is strictly verboten within the Trump inner circle. But it keeps happening.

This time, it was a talk by Jared Kushner, the president’s son-in-law and one of his top advisers at the White House. Kushner was speaking to a group of congressional interns on Monday. They were told not to record the Q&A with the president's son-in-law.

But someone did. And the audio ended up at Wired.

Kushner is someone who is rarely heard in public. He is also the man tasked by Trump to tackle — among many other monumental missions — the Israeli-Palestinian peace process. That’s why his comments on Monday about the long-running conflict in the Middle East have attracted some attention.

The question put to Kushner was about how he plans to negotiate peace between the Israelis and Palestinians, and what the Trump administration brings to bear that is unique.

All in all, his talk was “not very encouraging,” says Hussein Ibish, a senior scholar at the Arab Gulf States Institute in Washington. “It reads like a young man who really lacks any kind of detailed or nuanced background.”

At one point, Kushner said that “not a whole lot has been accomplished over the last 40 or 50 years.”

This would appear to overlook the treaties signed by Israel, Egypt and Jordan. But Kushner has a point here, says Ibish. Because the peace process has never actually delivered on its core promise of a final peace deal between Israel and the Palestinians.

But Ibish adds that if the Trump administration really believes that US involvement in Middle East peace efforts is useless, then that's a problem. He says the Palestinians, in particular, saw some real signs for optimism at the start of Trump’s term.

“Trump comes in and makes this an important agenda item. That means the Palestinian issue is suddenly back on the international and regional stage. [Palestinian Authority] President Abbas is in the White House and President Trump is visiting Ramallah and it puts the spotlight back on the Palestinians,” Ibish says.

There are signs, however, that patience is wearing thin.

On Tuesday, a top Palestinian official accused the White House of abandoning the two-state solution. The last couple of weeks have seen yet another wave of protest and violence in Jerusalem's Old City.

The Israelis might be entertaining fresh doubts about the Trump administration too, says Daniel Kurtzer, a Middle East policy studies professor at Princeton University.

Kurtzer also has served as US ambassador to Israel and to Egypt.

When the president's son-in-law said there might be “no solution” to this conflict, Kurtzer said that comes across as worrisome.

“To be charitable, it could mean that [Kushner] hasn’t come up with one yet, or he doesn’t believe that the parties have one,” Kurtzer says.

“But it could also be the beginning of laying the groundwork of an exit strategy, where you report to the American people a few months from now or six months from now that, you know, ‘We’ve tried. We don’t have a solution. And we’re going to focus on other things.’”

If the latter is the case with the Trump administration, Kurtzer says that preparing for failure seems like a strange way to rally Israelis and Palestinians to commit to a US-sponsored peace process.

On the question of what is unique about the Trump team's approach to Middle East peace, Kushner seemed unsure.

"What do we offer that's unique? I don’t know… I’m sure everyone that’s tried this has been unique in some ways," Kushner said.