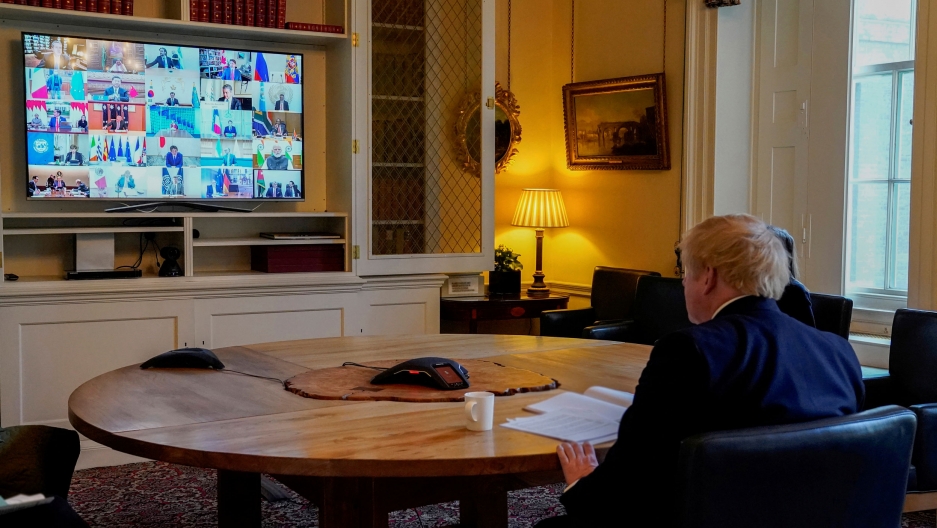 Britain's Prime Minister Boris Johnson sits in the study of 10 Downing Street, on a video conference call to other G20 leaders during the coronavirus outbreak in London, Britain, March 26, 2020.

The COVID-19 outbreak has set in motion a reshuffling of global powers.

Experts say international cooperation is critical to combat COVID-19. But as more and more countries close their borders, global leadership is also retreating behind national walls.

“In the teeth of this pandemic, at a time when you really, really need big picture global cooperation, we just haven't got that,” Susan Minton Beddoes, the editor-in-chief of The Economist, told The World in a conversation with host Marco Werman and Nicholas Burns, former US ambassador to NATO.

A global response is critical to tackling the challenges posed by the virus — from sharing data that accurately models the crisis, to collaborating on a vaccine and its equitable distribution, said Burns. But there is little evidence of effective cooperation.

"There's no sense that they're working together.”

“The G20 group of the 20 largest countries of the world is probably the right forum,” Burns told The World. “They met for two hours last week in a teleconference. That means everybody gave a 10-minute speech and they went home. There's no sense that they're working together.”

Even at the level of the European Union, solidarity is lacking. China and Russia have stepped in to fill the void by sending supplies and medical staff to hotspots in Europe, as European partners fail to do so.

And as China proactively responds to calls for help — and pads its soft power around the world — the US has continued to follow President Donald Trump's flagship policy of “America First.”

While the absence of US leadership is striking, China's actions in the crisis response are also viewed with some suspicion around the world, Minton Beddoes said. The autocratic country is far more interested in its short-term goals than in stepping into a true leadership position.

"What we have is a vacuum and a vacuum that can be filled if the US chooses to fill that again."

“I don't sense any desire [for China] to play that responsible global hedge man role,” Minton Beddoes said. “What we have is a vacuum and a vacuum that can be filled if the US chooses to fill that again. I think around the world that would be welcomed with absolutely open arms.”

“We're in a world where multilateralism has become, in some sense, a bit of a dirty word. Globalism is a dirty word. It's a much more nationalistic world. And the US was taking a different tack, with a trade war and so forth, long before this pandemic,” Minton Beddoes said.

The coronavirus crisis has served as a catalyst for democratic decline, as authorities have blurred the lines between public health responses and government overreach.

“We're certainly seeing a resurgence of nationalism, perverse nationalism, discriminatory nationalism,” Burns said. “We saw Viktor Orbán, the leader of Hungary, become effectively an autocrat ... in suspending parliament and suspending civil liberties. We're going to see — in a way — the ugly side of human nature.”

And that nationalist retreat will also negatively impact the global economy, Burns said.

“Unfortunately, I think we're going to see a lot of people react against globalization, against global supply chains,” Burns said. “You'll see companies back off undue reliance on China, either for trade purposes or because in a pandemic like this, you simply can't get what you need to manufacture.”

Discussion: Addressing weaknesses in the medical supply chain amid the coronavirus pandemic

He warned that countries should also be wary of repeating the mistakes of the Great Depression.

“In the 1930s, in the wake of the economic collapse, countries built high walls around each other and they raised tariffs,” Burns said. “This is a time actually for countries to lower barriers to trade so that the very important products made, say, in China can get to the United States or Britain or South Africa, when they need to.”

This again, comes down to global leadership that the US appears to lack.

“President Trump seems to believe that we're weaker when we work with others ... He's completely wrong in that assessment. And it's really damaging us.”

“President Trump seems to believe that we're weaker when we work with others, that we're stronger when we act singularly,” Burns said. “He's completely wrong in that assessment. And it's really damaging us.”

A lack of global cooperation is also likely to be felt particularly hard in emerging economies.

“Whether it's India, whether it's South Africa, whether it's [in] places in the world which do not have the health systems that we have in the West — economies are going to be hammered,” Minton Beddoes said. “Ordinarily, there would be a sort of big multilateral response to that. And that seems to be completely absent.”

Related: How the World Bank is helping developing countries respond to COVID-19

While much of the debate around the pandemic's effect on the global economy falls into two extremes — either a big plunge followed by a return to normal or a worldwide depression — a more likely scenario is something in the middle, she added.

"Working together to come up with the optimal way to balance this question of health and how you can open the economy — I think that's the real key ..."

“It is increasingly clear that we are not one day suddenly going to say we're able to lift all of the restrictions, all of the social distancing, we're back to normal straight away,” she said. “Working together to come up with the optimal way to balance this question of health and how you can open the economy — I think that's the real key to this having the minimum possible economic damage — which will be huge — but the minimum possible.”

The post-pandemic world could offer opportunities for positive developments, she added, such as permanent sick pay in the US and greater investments in health care systems.

But what of global governance?

Listen to host Marco Werman's full interview with Susan “Zanny” Minton Beddoes and Nicholas Burns by clicking on the audio player above.