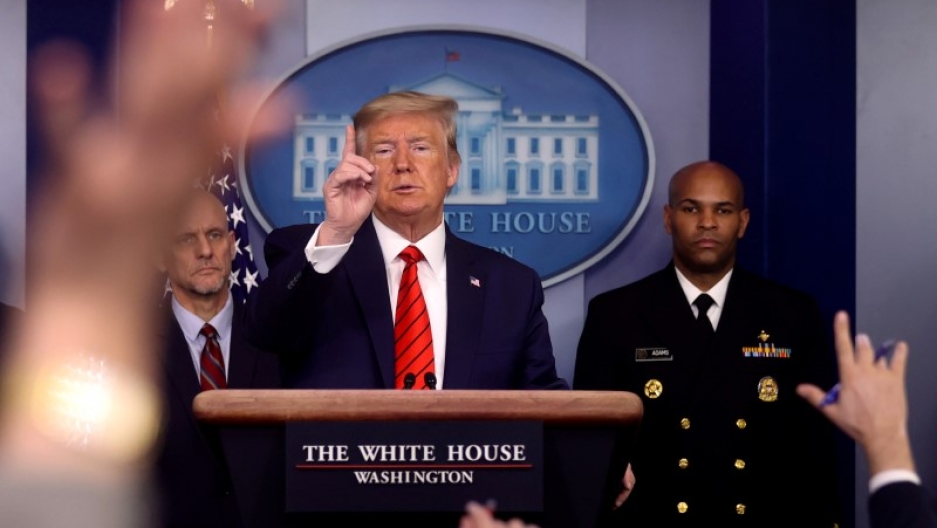 US President Donald Trump takes questions during the coronavirus response daily briefing at the White House in Washington, DC, March 19, 2020.

With major world powers retreating to their own corners to combat the coronavirus outbreak, prospects for multilateral diplomacy seem dim, especially as US President Donald Trump ratchets up his rhetoric against China over the coronavirus.

Trump's tougher language marked an escalation in a bitter war of words between the world's top two economies that has widened to include the global pandemic and media freedoms.

"I don't know if you'd say China's to blame," Trump said. "Certainly we didn't get an early run on it. It would have been helpful if we had known about it earlier. But it comes from China, and it's not a question about that - nobody's questioning that."

But Susan Rice, national security advisor during President Barack Obama’s second term and former US ambassador to the UN, says pointing the finger doesn't help deal with a global problem.

"The reality is that a pandemic, by definition, is a global phenomenon and as we have seen, can arise in any one far corner of the world and spread to another. And putting up walls, halting commerce, halting travel can potentially slow the spread," Rice said. "But as we're seeing here in the United States, as the president brags about his brilliance in stopping flights from China, it hasn't, in fact, prevented the widespread outbreak here in the United States. And so because it is a global phenomenon, it ultimately is going to require global action to tamp it down."

Rice spoke with The World’s host Marco Werman about the risk of a worrisome breakdown in US-China relations.

Marco Werman: Even the EU, though, which we thought was a unified body, has retreated into its own kind of traditional nation states. What alternatives do you see right now? Because ultimately, in a crisis with limited resources, it isn't each nation's government responsible for protecting only its people?

Susan Rice: Yes, of course it is. But the reality is that while we might focus internally in the short term, unless we are able to cooperate globally in the medium to long term, we may shut [coronavirus] down in China or shut it down, you know, in South Korea, but if it springs up in Africa or springs up in India, it's just going to start another global wave.

Related: Russia is trying to spread a viral disinformation campaign

You were UN ambassador. Isn't that where this kind of sharing should be taking place right now?

It's certainly one venue where it might be taking place. It's remarkable to me that, in contrast to 2014, when we were dealing with the Ebola epidemic — which obviously was a different sort of a disease, but one that had the world quite rightly scared and costs tens of lives in West Africa — we used the United Nations under President Obama. We convened a summit with the UN secretary general at the United Nations and brought countries together to spur their collective response. It was a collective action.

In the past, the United Nations Security Council has convened around disease threats, including the HIV AIDS threat back in 2000. So it's not unheard of or unprecedented for that to happen. And yet, when you have a leadership in Washington and in the White House that seems to disdain collective action, even disparage cooperation with our allies, what seems to be the last thing that would occur to them is to use institutions like the United Nations or to draw on the capacity of the World Health Organization — which has its failings, but in this case, seemingly well outperform the United States government in its ability to help countries respond.

So the two big players on the global scene right now, the US and China, are sounding increasingly hostile towards one another — not a good thing to happen in the middle of this pandemic. Ambassador Rice, do you think Beijing and Washington are experiencing some kind of seismic change here, or do the two governments need each other too much for that to happen?

Well, I think this is a moment of dangerous friction and mutual recrimination that, frankly, needs to stop. And for the president of the United States and those around him to race bait and brand this "Chinese virus" or a "Wuhan flu" or other offensive terms like that is completely inappropriate and unhelpful and unacceptable. It is the case that the virus originated in China. It's also the case that the 2009 H1N1 flu virus, which was extremely deadly globaly, originated in North America, as did, I understand, the so-called Spanish flu back in 1918. So there is no advantage in recrimination about where it began. The issue is how do we deal with it?

And we have reasons to be critical with how China dealt with it in the early stages. No doubt. But people in glass houses shouldn't throw stones. The administration's response to the coronavirus in this country, it's delay, it's denial, it's deception, and now it's utter incompetence to deal with critical things like testing, like getting medical supplies, personal protective equipment, ventilators and the like urgently out to those hospitals that need them — I mean, I could go on. I think the American people are well aware this has been a bungled, botched response. And rather than throwing stones at China and China, throwing stones at the United States, and it's been two ways, we all need to focus on the imperative of dealing with this crisis, the health crisis and the economic crisis. And realize that over the long run we're not going to deal with either in isolation.

Well, for better or for worse, are two economies are the largest in the world. They're deeply intertwined. Our supply chains are intertwined. Our technologies are intertwined. And as much as some on both sides may have a fantasy of decoupling our economies, I don't do believe that that's feasible. It's certainly not desirable because at the end of the day, that will leave us in competition for smaller slices of a global pie. And each of us will be poorer as a result. So we've got to get through this crisis. We've got to minimize the vitriol and the hostile rhetoric on both sides.

Finally, ambassador, President Trump has called himself a "war-time" president. Trump says a lot of things, but using the label wartime president, why does that matter?

I'm not particularly interested in how he wants to market himself. I'm interested in whether he's going to finally step up and lead decisively, dispassionately, responsibly, credibly, and get to the American people the medical and economic relief that we need to get through this crisis together.

This interview has been edited and condensed for clarity. Reuters contributed reporting. Follow The World's COVID-19 coverage here.