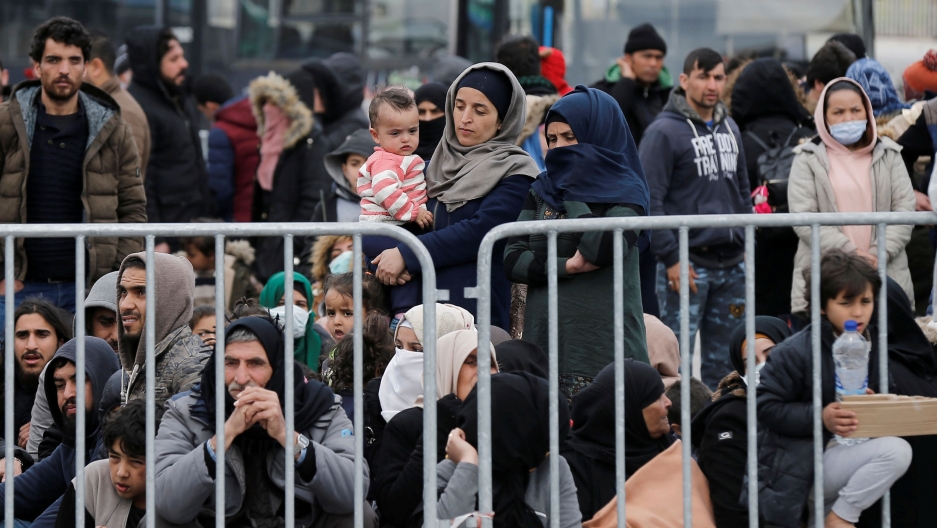 Migrants who arrived on the island of Lesbos in the past four days are seen at the port of Mytilene, as they wait to board a Greek navy ship, Mytilene, Greece, March 4, 2020.

European Union countries offered more money on Wednesday to Greece for border policing and humanitarian aid to Syria's Idlib, in an effort to avert a mass influx of migrants — but were at odds over what to do about Turkey.

EU interior ministers meet in Brussels on Wednesday for emergency talks, to be followed by foreign ministers on Thursday and Friday, as some 25,000 refugees and migrants gather on the Greek border, seeking to cross into Europe.

That came after Turkey — citing the latest fighting in Syria — backed away from a 2016 deal with the EU to keep refugees and migrants away from Europe. Idlib has been the latest flashpoint in the nine-year-old war in Syria, where Russia-backed Syrian forces are fighting rebels supported by Turkey.

Greek riot police used water cannons and tear gas on Wednesday against migrants at the border, while a top EU official met Turkish President Tayyip Erdoğan to sound out his demands in exchange for Ankara's reverting to keeping refugees in Turkey.

"Turkey is not an enemy, but people are not weapons either," the EU's top migration official, Margaritis Schinas, said in explaining that approximately $782.95 million worth of extra funding for Greece would fortify the EU's external border there.

The EU will provide approximately $400 million of immediate support, with an additional $400 million made available, if needed.

"My understanding is that 350 million euros, about $400 million, are a first tranche that are going to be used at the borders, and that includes for medical assistance and humanitarian assistance and also to deal with organizational issues on the border. Now, if you're asking me if that's sufficient, that depends on what Turkey does," said Anna-Michelle Asimakopoulou, who represents Greece in the European Parliament. Asimakopoulou spoke with The World's Marco Werman about EU negotiations with Turkey.

Marco Werman: What is the thinking at the EU parliament behind that money? Is it to slow down the movement of refugees — to stop it altogether — or just to have it unfold in a more orderly manner?

Anna-Michelle Asimakopoulou: Both. But the main thinking is that this crisis is not new. It started 3 1/2 years ago and this is why there was this agreement with Turkey. And meanwhile, Europe was supposed to get its act together and have a migration policy and figure out how to deal with this situation. It has failed to do that.

What has been the outreach to President Erdoğan at this point from the EU?

My understanding is that there's been a conversation both with [German Chancellor] Angela Merkel and with [Josep] Borrell [EU foreign affairs chief]. And my understanding is it's been made clear to President Erdoğan that we will not give in to blackmail and that he is expected to respect the agreement. ... By the way, nobody is denying the fact that there is a huge crisis and that Turkey has a large number of refugees and it needs assistance in order to deal with them.

Related: As Turkey opens border, conditions for migrants are 'unacceptable'

So Brussels is providing some assistance to help Greece. Is Brussels doing enough on the diplomatic front with Turkey to deal with Erdogan?

I think that Brussels has to be very, very clear what the consequences will be if President Erdoğan continues this irresponsible blackmail-type behavior. That might include suspending the functioning of the customs union that we have. In any case, first, the blackmail stops and then we discuss additional assistance for what is, partly, a legitimate claim on the part of Turkey.

You say it's blackmail and perhaps some of those refugees are from Afghanistan and other parts that have nothing to do with Idlib. And maybe some of them have been in Turkey for a few years. But don't you see the humanitarian side of allowing the borders to be open so these people, many of them, can reach freedom and opportunities that they've been deprived of?

Yes, of course, we see the humanitarian side. Greece has come out of its great depression only recently. And yet in the past three or four years, it has shown an unprecedented and disproportionate amount of solidarity. Disproportionate not to the need or to the sensitivity that we have to human pain, but disproportionate to its size and capacity, both geographically and financially and economically, and has received a very large amount of migrants and refugees and would continue to do so. In fact, this is now impossible. When you have 20,000 people arriving, you cannot give them the individual attention that's required to examine an asylum application, which is why in this asymmetrical and emergency circumstance, we have suspended taking applications.

Related: 4 years on, a Syrian refugee family still torn by US policy

Is that appropriate right now?

I think that's proportional to what's going on.

So, do these migrants have to be settled elsewhere in Europe?

Clearly, there has to be a fair reallocation scheme, fair in terms of what can be accepted by each country based on their size and their financial capability. So, yes, they have to be resettled through Europe. And then also, let's not forget what the source of this problem is. The source of this problem is what's going on in Syria. So, the diplomatic efforts of the European Union have to focus on helping with the situation in Syria.