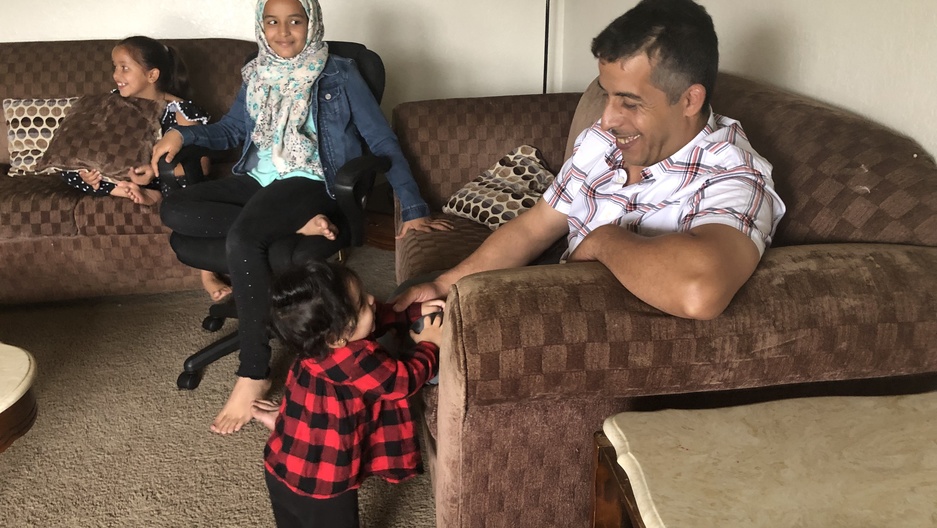 When Wajed al-Khalifa and her family arrived in the US as refugees in 2015, everything about the United States seemed foreign. They were resettled to Turlock, California, a rural city about two hours east of San Francisco.

Yet it wasn’t long before they started hitting milestones: Khalifa and her husband, Gasem al-Hamad, got driver’s licenses. Their four kids excelled in school, quickly overcoming barriers such as English-language instruction and a new education system.

It was a big change after fleeing war in Syria, living in limbo in Jordan for more than two years, and then being accepted to resettle in the US as refugees.

Lately, there have been more milestones, the biggest being a new baby girl — the family's first US citizen child. Their son Mohamed, now 5, has also sprouted up. He and his siblings seamlessly switch between English and Arabic.

Hamad is also picking up more English. “A little bit better!” he says. “I go with my kids to school, I talk to the teacher. Every day I’m learning something different.” Khalifa, his wife, is just starting to learn English at home; a tutor comes to the house twice a week at no charge, she says.

Hamad, 38, still works at the same halal slaughterhouse where he got a job when he first arrived. It’s tough, messy, physical work, similar to what he did in Homs, Syria. But now he is pretty much supervising the place and earning $16 an hour, up from $9 when he first started.

“My boss says, inshallah, in a few months, he’ll make me more,” Hamad said. More financial stability means the family has transitioned from food stamps and has moved from their previous cramped apartment to a single-story, three-bedroom home with a spacious backyard, where Hamad grows onions and tomatoes — just like he did in Syria.

Yet some aspects of their lives are stuck — and may be for a while. Hamad’s older brother remains stuck in Jordan. He had been accepted to be resettled in the US, too, and had his plane ticket ready to fly in January 2017, Hamad said. Then, President Donald Trump’s travel ban, issued his first week in office, blocked Syrian refugees from entering the US, along with people from several other Muslim-majority countries.

One consequence of the policy change is separated families. Hamad does not know when he will see his brother again. His brother’s son, who is Hamad’s nephew, did make it to the US — just one month before Trump took office. The son got in while the father did not, split by a sudden shift in US policy.

“No, no, this is not fair,” said Hamad, shaking his head.

This year, the US cap on refugees is 30,000, down from 45,000 last year, already a historic low. This has delayed or halted the process for refugees hoping to come to the US.

When lowering the annual US refugee admissions ceiling in September 2018, then-Secretary of State Mike Pompeo referred to the need to address a "massive backlog of outstanding asylum cases and greater public expense." He added that the US would continue its focus on "addressing the humanitarian protection cases of those already in the country."

“What does this say about America? The US has always been the global leader in providing this type of humanitarian aid,” said Karen Ferguson, director of the International Rescue Committee in Northern California, one of nine resettlement agencies that help families like Khalifa’s once they arrive in the US.

Ferguson said that she finds hope in countries beyond the United States that are increasing — rather than reneging — their commitment to taking in refugees.

“The country that I enjoy looking at right now is Canada,” she said. “They stepped up even more than the United States did in terms of trying to respond to the Syrian crisis. And they have not stepped away in the same way that the United States has.”

The largest numbers of refugees to the US as of Oct. 1, the beginning of the 2019 fiscal year, to the end of May have arrived from the Democratic Republic of Congo (8,402 during the eight-month period), Myanmar (3,081) and Ukraine (2,085). In terms of Syrians, the US has taken in about 350 so far this fiscal year, compared to 12,000 for all of 2016 — still just a sliver of the millions of Syrians displaced worldwide.

In California, the Syrian couple and their family feel more rooted in the US than when they first arrived. Khalifa said she feels freer here and that her kids are learning more.

Hamad says the family has no home to go back to in Syria anyway. He watches a video on his phone that a friend sent him recently from his old neighborhood in Homs, still in ruins. The video scans the length of several blocks, showing each home reduced to rubble after years of war.

Hamad said that he cannot imagine going back. Safety is still a big concern. Four of his brothers have been killed during the Syrian war. Now, his hope is that his surviving brother — displaced in Jordan — can eventually join him in the US. Yet he is unsure when, or if, that will happen.